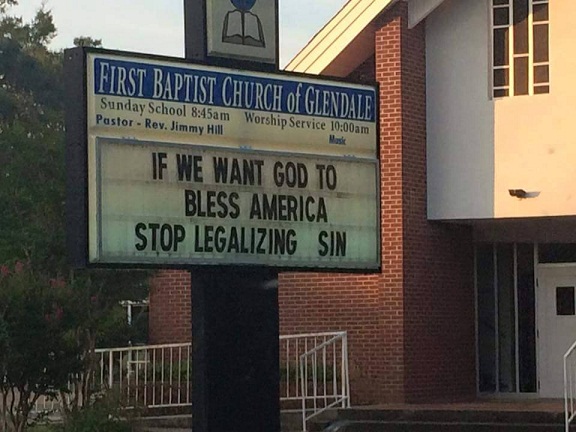 ^^^ THAT EVIL is one of the chief reasons why I don’t attend church… they are filled with Snakes,Hypocrites, and Chumps who go to church to feel superior to the rest of humanity.
*You wont find Salvation* in such places as Satan Rules there… not Christ.
Am I being harsh?
Perhaps.
I have never set foot in the place… they may have Good intentions yet they are unintentionally paving the road to hell.
There are few enemies of Humanity with bloodier hands than Religious tyranny and persecution of infidels…(including Atheist tyrannies)

This is an age of Apostasy.
Nowhere in this age of grace are we Christians told *to compel* righteousness.

It’s a simple truth… yet sadly one that has become absolutely alien to a great portion of so-called Protestants.

To please God in this present age all our good works must spring from the heart… not from compulsions or fear of the human magistrates…or fear of hell.
Not to be able to make this simple distinction is a testament to gross ignorance on the part of so-called Christians and is the chief reason they have been involved in atrocities throughout the centuries… all under the Guise of ‘Piety’ and the common good.

Legalist Christians cause the gospel and name of Christ to stink among the very souls Christ came to save!
You are Pharisees and know not the Grace of God.

Christianity is the salt of the Earth *because it converts souls*… not because of Zealous legislation’s.
You want Society to become more Godly?
Get out there and Preach the Gospel of Grace!
Teach God’s love and forgiveness to sinners…. Don’t Persecute them… and feel all Righteous about it.
Satan appears as an Angel of Light, and his Wolves appear as Sheep… Ministers ‘of Righteousness’. 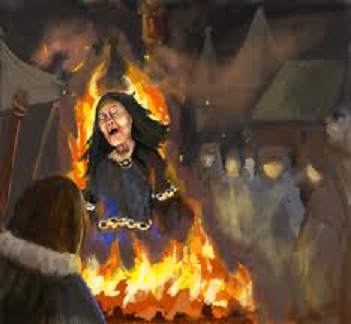 The snare he lays is Self-righteous Hypocritical Piety… Gross judgmentalism … Vicious hatred where their ought to be compassion… a Spirit of persecution… a lack of faith in the power of the Gospel…. and Gross mis-handling of the scriptures…

Christianity is a Voluntary society… not a political movement, yet Satan has been able to deceived multitudes, because they fail to *Rightly Divide* the word of truth… causing them to completely miss what the Gospel of the grace of God means, and to become Pharisaic Legalists 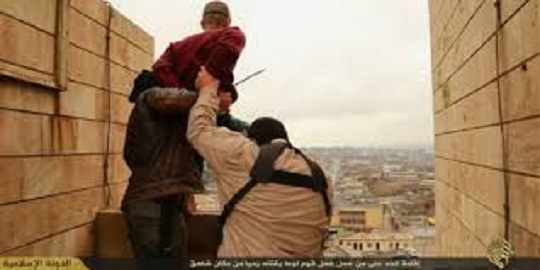 No Grace here…. Isis Zealots prepare to throw a Homosexual to his death… in accordance with Sharia Law.

Repent!
What Light distinguishes you from the Witch burners of Old….from the tyranny of Isis?

Rediscover the great Truths upon which America was born!
Yes the sin about you is great, yet Tyranny is not the solution!

You have a much Higher calling!

Sadly the Bible teaches that in the end times the Church will dive into apostasy…. The Salt looses it’s savor … and the world gets ready to embrace the tyranny of the White Horse Rider…