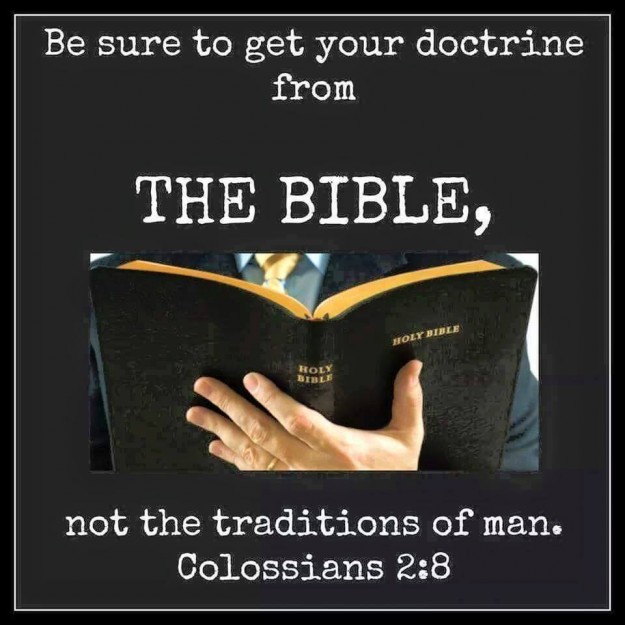 As is his wont, my King James Bible believing Dispensationalist libertarian Christian co-blogger Tim tagged me in his post (of the above image) on Facebook. 🙂

Be sure to get your doctrine from the Bible, not the traditions of man! (Colossians 2:8)

I really do appreciate the pro-tip. It’s just that there’s a whole lotta problems with this instruction. At least one of which renders Tim’s advice utterly useless!

One problem is that the cited verse, Colossians 2:8, does not even mention the Bible.

Beware lest any man spoil you through philosophy and vain deceit, after the tradition of men, after the rudiments of the world, and not after Christ. (KJV)

See! What this verse is really saying is be sure to get your doctrine from Christ, not the traditions of man! I agree! But let’s be clear. There’s no mention at all of the Bible in this verse. And I’ve made it quite clear in previous blog posts what my view is. It is that Jesus is inerrant, but the Bible isn’t. The Word of God is inerrant. His scribes, not so much. Yes, that’s right. I basically equate the Bible with “the traditions of man”. I don’t equate the Bible with Christ. The Bible as we know it hasn’t even been around a couple of thousand years yet. Whereas

Believe it or not, another problem is that the KJV mistranslates this particular verse. And don’t believe it or do, so does the NIV. But of course! 😉

See to it that no one takes you captive through hollow and deceptive philosophy, which depends on human tradition and the elemental spiritual forces[a] of this world rather than on Christ. (NIV)

Which is why I always have recourse to Young’s Literal Translation for times like this when it matters exactly what the Bible says.

It’s clear that “spoiled” is a KJV mistranslation of “spoil”. Yet at least the NIV has the good grace to provide a footnote (see above) to the effect that it has construed “the basic principles” (rudiments) as “the elemental spiritual forces” of this world.

But here’s the fatal flaw with Tim’s advice—be sure to get your doctrine from the Bible, not the traditions of man!—which renders it useless. Which Bible?

Tim’s telling me to be sure to get my doctrine from the Bible, but which one? As we all know, Christians (e.g., Protestants vs. Catholics and Orthodox Christians) can’t even agree on which books belong in the Bible, let alone which translations of the canonical books are themselves canonical.

Which Bible? Tim will, of course, answer the Authorized King James Version of 1611. Which is a fair answer to a fair question. But if I accept this answer, one thing’s for sure. I’m now getting my doctrine from the traditions of man, and from the traditions of one man in particular, viz., my co-blogger Tim Wikiriwhi! And not necessarily from either the true Bible (if, indeed, there even is such a thing) or Christ.

It comes down to this. When all is said and done, we must decide—each of us individually must decide—in what and/or in whom to trust.

I trust in Jesus, the Son of God, whom I know from the first-hand accounts of his ministry by the original gospel authors, from his work in the lives of my brothers and sisters in Christ, from his work in my own life, and from personal encounter.

I trust in the deliverances of my own God-given moral compass when (not often, just occasionally) they conflict with what’s in the Bible.

So the Bible. What’s it good for?

Why, it’s profitable for doctrine, for reproof, for correction, for instruction in righteousness: That the man of God may be perfect, thoroughly furnished unto all good works, of course! 🙂 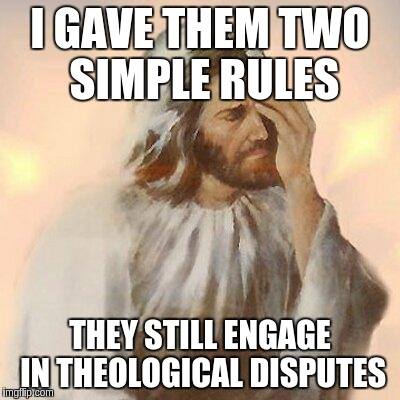