Note: The ‘Wanganui’ district and River have now been officially renamed ‘Whanganui’ in an act of Politically correct revisionist nonsense. Read about the Whanganui River here

Election year,About Ten years ago I was Standing as a Parliamentary candidate for the Libertarianz Party, as well as being the Party spokesperson for the Deregulation of Maori affairs… I attended a ‘Meet the candidates’ election meeting in Hamilton East… the Seat of the Waikato University.

At this meeting one of the candidates stood up, introduced himself as a Tutor of Maori studies at the Waikato University, and proceeded to explain what a thoroughly immersed Maori he was… that is immersed in today’s perspective of what is now supposed as being the ‘Ancient/ Pre-European Colonization Maori Culture.

These were his credentials that he expected to qualify him to be a member of the New Zealand parliament.
Of course he left out all the historical bits about inter-Tribal hatred and warfare and the rampant cannibalism…. yet… and this part is important… he took the trouble to explain that The Waikato river was ‘Sacred’ to him… and that in fact the river was in his eyes ‘a person’.

I remember being quite frankly amused!

The election came and went… and though my own Libertarian principles were spurned by the people, thankfully so were the patently absurd notions of this Dangerously Fraudulent academic.

I say that he was a fraud, as we all know that *He really did not believe* the river was a person…No Maori today does…. He was acting… putting up a complete charade … pretending to be a ‘super-Maori’… whom had heroically shrugged off 200 years of Euro-centric culture and learning.
Yes… he claimed the River was a person!

That he did not flinch from presenting himself like this is a testament to deep seated prejudices… and a malevolent political agenda.
Yet this stuff was no secret!
It was what he was being paid by the Taxpayers to teach in the university!
That baloney and the Official line that today’s Maori are an oppressed people whom have suffered a ‘Holocaust’ at the hands of the Greedy Parasitic European invasion.

This is what today’s Maori are told they ought to believe too…if they wish to claim to be ‘real Maoris’.
And this story of Maori oppression by the Pakeha is also supposed to be embraced by the Pakeha themselves!
And untold numbers of them do exactly that.
They take on this *Collective guilt trip* simply because they are the descendants of the Colonial pioneers.
They have abandoned the view that *their ancestors* were enlightened and Bold, and forged a noble civilisation in a land that was once one of the Darkest corners of the Globe… no… The revisionist history says that it was These advanced white people whom were the real Savages… and that they destroyed an enlightened culture ‘that was one with the land… etc etc… not backward at all!

It was seeing this sort of absolute Political Propaganda of the most Malevolent and dishonest type, that had convicted my conscience years before as a Libertarian and a New Zealander of Both Maori and Pakeha descent to put myself forward as Party spokesman for the Deregulation of Maori affairs.

Not only was the Portfolio of ‘Maori Affairs’ being used to perpetuate an apartheid State complete with separatist Race-based electoral rolls and seats in parliament, but these doctrines were being used to justify the redistribution of wealth on a gigantic scale.

Years later… nothing has changed.
100s of millions of Dollars, and vast tracts of Lands, and other assets have been handed over as ‘Treaty settlements’… to a bunch of charlatans whose only virtue is that they have a fraction of Maori Blood.
That’s right… These Pseudo-Maori whom all have Pakeha Blood…most of whom have more Pakeha blood than Maori…which happened via intermarriage and mutual assimilation… have managed to claim they are victims of their own ancestors… whom they conveniently pretend they have no connection with!

They also have conveniently forgotten that their Maori ancestors were Migrants whom arrived here *And really did perpetrate a Holocaust* upon the Tangata Whenua… the people of the Land… whom were here when they arrived in their Canoes.

None of the truth is taught in New Zealand schools and Universities because the Socialist Left have systematically implanted their ‘Anti-imperialist* Propaganda for world revolution that has its roots in Russia 1917!
The very Racist Doctrines that put people like Robert Mugabe in Power in Zimbabwe, and inspired the Anti-Indian Coups in Fiji.
It was the Commy Scum of the 20th century that invented the doctrines of ‘indigenous rights’… specifically designed to ferment unrest and Communist revolution.

The Soviet Union collapsed in the early 90’s, and China has quietly abandoned its overt Communism… yet the fanatical socialists in the west never surrendered.
Today’s generations cant even relate to what the Cold war was about… so they are absolutely ignorant about how the subversive ideologies that are being taught today in our institutions of learning came about, and have been so successfully implanted as to now being virtually unquestionable.
If you question all the systematic racism being enacted… you must be a racist!
Its the perfect con. 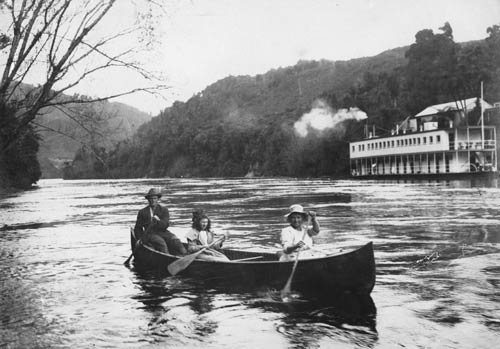 Because of 40 plus years of these shystery doings…springing from the most vile systematically fostered bigotry… and the most contemptible sence of entitlement… and the most Fraudulent and pretentious of Absurdities… New Zealand has now the Shameful claim to this:

“In what’s believed to be a world first, New Zealand’s government has granted a river the same rights as a living person.
The Whanganui River, considered part of the living landscape by the indigenous Whanganui Iwi people associated with it, has been granted legal personhood under a parliamentary bill, reports local news service Newshub. Two representatives from the local indigenous community — one appointed by the government, another elected by the community — will be entrusted with acting in the river’s interests…” 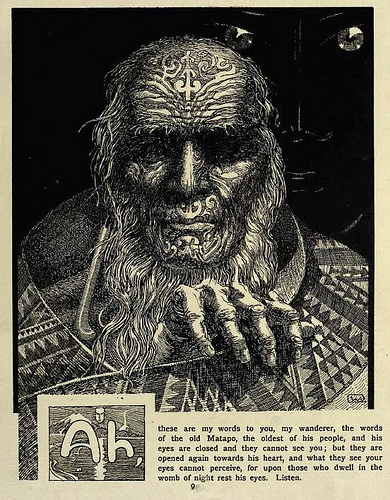 Gobsmacked!!!!
Animism as the basis of our Laws!

In accounts of the earliest times of first contact between Europeans and Maori, we read about the powers of the Tohunga… The ‘priests’/ witch doctors’ whom had occult powers and whom were the keepers of the Occult knowledge.
They were famous for their cunning, and used their ‘Mana’ for political ends, or anything that suited their purposes.
They could read omens about future events, and talk with the dead, and could put curses on people… and those they cursed… would believe it… and lay down and die.

It is with such incredulity at recent events as such patently insane happenings as the Wanganui river now being legally given ‘person-hood’…Its like the entire country of New Zealand has been placed under a hex!
It’s beyond belief!
How can any sane person take this stuff seriously?
Its like a form of superstitious bewitchment!

This is a fantastic Testament to just how far New Zealand has been suckered by the complete lies… and utter ridiculousness of the doctrines of the Indigenous rights movement and the NUTBARS that thoroughly infest our Universities…Parliament, and that now inhabit the vacant skulls of the Sheeple…
This trumps all the other absurdities like the fact that the majority of New Zealanders have accepted second class citizenship!
That they have allowed a tiny Tribal elite to fleece Billions of dollars from the Taxpayers!

The Lobotomy is now complete.

Now the shysters can legally claim that such vital assets as Rivers ‘are people’…and that they are the rivers advocates/ trustees/ Guardians… even though we all know that *Nobody believes such Bullshit as Rivers being people*… not even that Nutcases whom have pushed for such Travesties of Law!
And these shyters claim this is for the the well-being of the River when in reality it’s about potentially Billions of dollars in water rights… selling water to overseas Bottling companies… and claiming ‘fees’ from all New Zealanders whom need access to the rivers!
(The Treaty vested the Rivers in the Crown… for everyone… Then they were the Highways…and one of the reason Governor George Grey declared war on Tainui was because they started molesting settlers traveling on the river)

And before Colonization… The Rivers were Warpaths… they were not owned by anyone.. in fact in those dark superstitious days the River more likely owned *you!*…*Real Primitive Maori Really were animists*… They *Really believed* the River was a person … and they also accommodated Monsters at every turn… Taniwha! that had to be appeased.

It was all this backwardness, all the evils of Tribal warfare and cannibalism… all the monsters that inhabited this land… and the abject poverty and savagery that The Church Missionaries, The Treaty of Waitangi, and the colonization that followed Liberated Maori from, turning New Zealand from a Swap inhabited by monsters into a Paradise… God’s own… One of the most blessed places on Earth to live and raise children!

*All this progress is what the Nut bar socialists spurn, and the malicious Racial separatists seek to undo*
Its all about Political lies and delusions… Political power… and Filthy Lucre. $$$ $$$ $$$ $$$

I would like to think my activism will wake up a large number of New Zealanders to their Folly… inspire them to march on Parliament and throw out every politician who ever supported such Racist madness… and demand all such shysters embedded in Universities be hurled out in disgrace… yet I have been in politics too long to be so Naive.

The Rot is now terminal.
I have written this blog basically for a small handful of my countrymen whom are awake.
Almost Nobody listens to a word I say.

No Media will publish any portion of this, or ask for an interview.
I’m the one who is nuts… they say… I’m the dangerous subversive whose Ideas must be prevented from reaching the masses.
Not even the people whom claim to be fighting this apartheid will promote my teachings… they dont want to be associated with a Tinfoil hat wearing ‘Libertarian’.

There is no happy ending.
Satan Laughing spreads his wings. 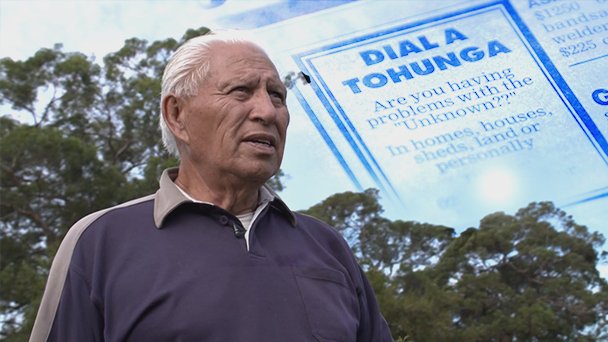 He is 100% Right.
And for slumbering New Zealanders and esp the Maori people … his words are alarm bells!
The whole victim hood of the Treaty separatists is known as ‘The grievance industry’… and everybody is being duped… and the ramifications are disastrous for everyone …

Is The Treaty Holding Back New Zealand?

State of Confusion. The Rule of Law vs The Mandate of the Majority. New Zealand’s Constitutional Crisis.
Maori Renaissance… *EPIC FAIL!*