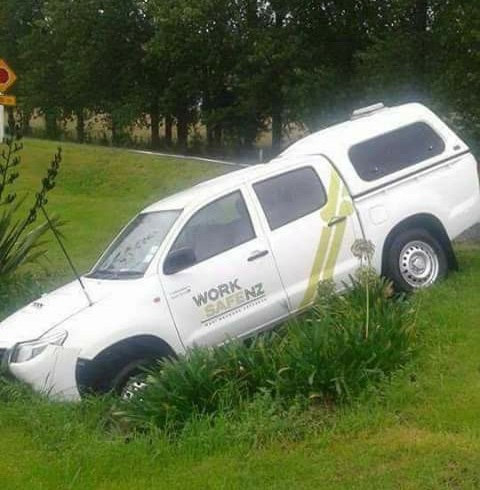 ^And…. that’s why the Idea of *Zero accidents* is for Retards and Birds.
Imagine the Paperwork on this… Good job!
😀 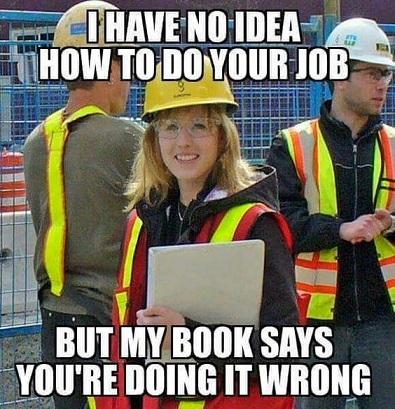 As soon as I hear some Manager, or Safety officer starts claiming ‘Zero accidents’ as being a company objective I know they are Morons trying to impose unrealistic and Jackbooted regulations…
They dont truly have worker safety in their minds… but seek to feign compliance with the stupid dictates of their Health and safety Committees and policies they have constructed to fool the Labour department and OSH. (Government Occupational Safety and Health)

Of course no worker can voice these thoughts at Company meetings.
This will single you out as a subversive element… a Bad apple in the basket.
Despite all the claims to wanting workers to be thoughtful about health and safety… in reality they dont.
They just want Nodding heads.
clapping hands are the only permissible sounds that may emanate from the floor at the ‘Solutions’ Management tables.
They want Blind…silent submission.

The walls are closing in.
Workers are Burred under expanding mountains of Rules… generated hourly by congregations managers whom have nothing better to do than have meetings and invent more ridiculous Rules.

They are Known as ‘The Cant do department’.. by those whom think that being employed actually mean getting the job done.

These managers are oblivious to the fact that the more silly rules they make.. the more ridiculous they appear to their workforce… the more they create worker dis-engagement… the less respect they inspire in General health and safety and their leadership.

Walls are now a Blur of Signs of Compulsion and prohibition. 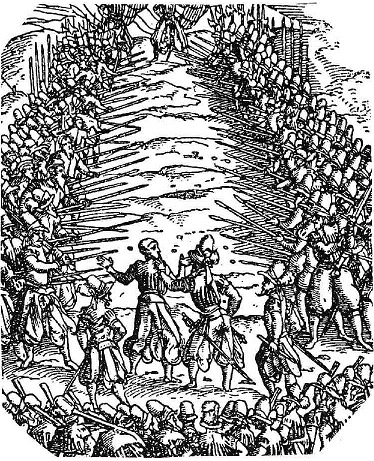 Workers must run the gauntlet everyday through the tyranny of Bogus Health and safety rules that are just waiting to impail them should they make the slightest mistake. Ie Being Human is now unforgivable.

With regards to the Worksafe vehicle in the ditch (Top of the post) *I SAY DRUG TEST THEM!*
Make them piss in a jar!
Question their competence… Give them a written warning!
Treat them with suspicion …. yeah.. welcome to the Nazi Culture these arseholes have created for the rest of us….
See how they like it.
This is the Gauntlet they make the rest of us pass through every day.

The Enforcers of tyranny love to Rip us little folk a new arsehole … and threaten our jobs anytime we show our humanity…even when we have exemplary work records…yet they *Never* seek to employ their tyranny against themselves!

Look at what happens when the Evil Eye turns its attention on the Enforcers themselves!
Mandatory blood testing for police officers is being slammed as “heavy handed” and showing “a trust problem”.
Read more Here.

This is when the Police balk at being Drug tested *on their Job*… and claim its a violation of trust… yet they and arse-wipes from the government regulatory bodies wont accept that argument from the plebs.
Company Administration and Executives love to demand a company drug test policy for the plebs they employ, yet always make themselves exempt!

This is just a fact of life… No risks means nothing gets done!
And The Nazi system now being implemented tyranizes over Good workers like a Fail for our Backs… while making endless excuses for the powers that be.

The whole Safety business is a scam… A bureaucratic shitstorm draining the lifeblood out of our economy and carrying a horde of Useless nothings upon our backs.

The whole system is Corrupt.
Its created a minefield for Small businesses that prevents them from being able to take on many do-able jobs because the Red Tape makes many jobs financially un-viable.
The whole system does not allocate responsibility fairly or justly, and sets absurd standards, and actually accommodates very *Bad management of health and safety by big companies whom have learned how to juggle the system.

They rigorously police silly / petty rules … giving an appearance of putting ‘safety first’ while turning a blind eye to the *Big problems* that actually demand they budget bigger sums to remedy.
The basic principles of Safety have been abandoned, so that most of the proscribed remedies today can actually make jobs *less safe*.. yet that does not matter because the remedies appear to comply with what has become ‘accepted norms’.
People whom injure themselves at work are asked to come in *on crutches*… Bandages around their heads… over one eye… on light duties… just so the company can downplay the seriousness of the events to ‘Work safe’ and ACC. 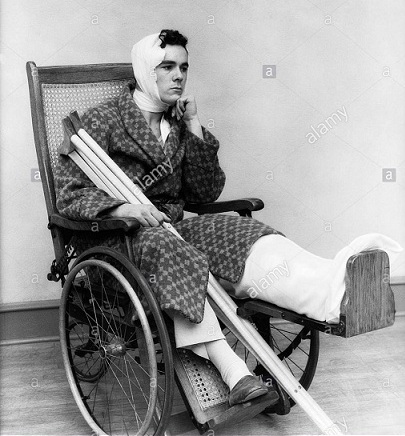 This proves the modern day Business execs put *their Graphs ahead of safety*… and as long as their Graphs show trending in a favorable light they pat themselves on their backs for their cunning.
*Never do they accept responsibility for the Bad decisions they make on a daily basis that impact negatively upon the minions far below…*… think Pike River… and The white washed investigations that ought to have Named names in Parliament… in Government departments, and in the Pike River executives… yet it was all conveniently suppressed… they want the mine permanently sealed .. the truth to remain buried.

Even if the front line staff did tinker with the gas detectors, etc They did it to keep the Bosses happy… who expected the work to be done even when the Mine was flooding with gas.
The Design of the mine was a Political… Eco construct… That put political concerns ahead of Real science and safety.
The entry to the mine should have been closer to the payload.
They should have been allowed to put in more ventilation shafts given the length of the access tunnel now being describes as being ‘The Barrel of a gun’, yet they were not allowed to do so because of the political desire to ‘Minimise the environmental Footprint’ of the project on the National park.

Yet these things took second place to the delusions of maintaining the appearance of Safety and Environmental fanaticism.
Nobody who was responsible in Government (Helen Clark’s Regime) has ever been called to account.
And the then current Government was quick to defect blame from the political processes that generated the problems!
(just as the Leaky Building syndrome sits at the feet of Council Building inspections and regulations) 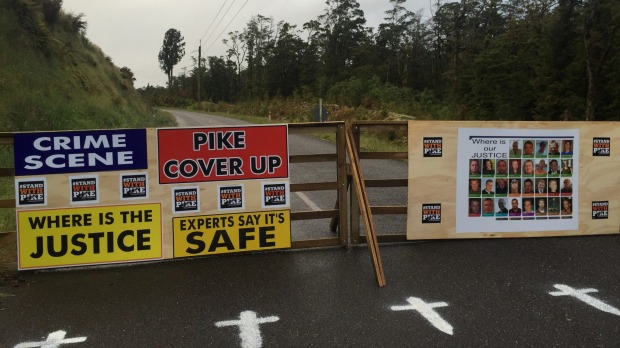 The whole ACC and OSH systems are Corrupt and need abolishing.
ACC is a gigantic form of Robbery.
We need to start from scratch based upon sound principles of Justice.
Laws that uphold a viable Private insurance system that protect workers and employers from being defrauded by Insurance companies is where all this needs to go… in fact the laws around insurance in general need a serious clean up… currently faith in insurance is so low in the minds of the plebs…they are lumped with Politicians, Lawyers, and Used car salesmen for matter of trustworthiness.
This is probably the biggest hurdle standing in the way of Real reforms.
Its funny that the sheeple have a distrust of Private insurance companies yet almost blind faith in *Government insurance* which will shaft you just as quickly… and is robbing us blind… and is crippling our ability to be productive and achieve our goals… reducing our quality of life at every step… and enriching an army of freeloading Back riding monkeys.

In a deregulated society, there will still be rules and responsibility.
There will be an even greater sphere for Private safety management professionals… yet the political environment will have been fixed, and how costs in health and safety are carried will be more open to scrutiny.
It will cost the workers *less* than they currently pay.. with all the hidden ACC fees buried in virtually everything they buy, etc, etc..
It is a massive topic.
Most Safety issues could instead be solved by simple common sence… yet that has been virtually outlawed… The Safety nazis will tell you that Common sence is a myth… yet fail to see that it is their Nutbar Tyranny that drives common sence out of everyone.
Their policies cause an atrophy of self-responsibility.
Peoples well being are far more under threat by the Tyranny of compliance to Red tape than they ever were by real hazards.
Ultimately We need a complete reversal of Safety culture from Tyranny to self-responsibility. 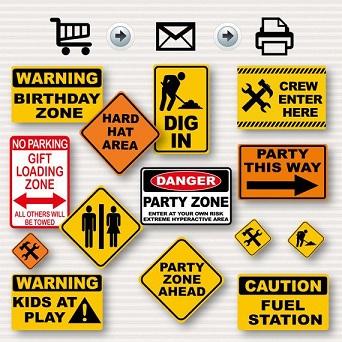 More from Tim > Whistle while you work. Work ethics and work culture. by Tim Wikiriwhi

3 thoughts on “Running the Gauntlet: The charade of Workplace safety.”