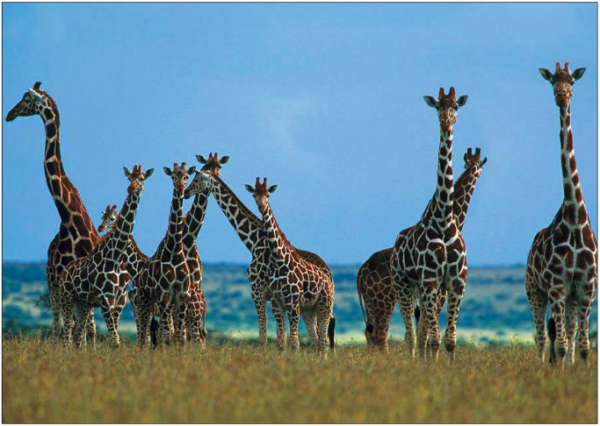 In a comment on Tim’s post The Ludicrous Claims of Evolution! Why not ESP? Kiwi Dave says

Our recurrent laryngeal nerve inefficiently loops round our hearts instead of directly connecting to the brain stem; this, like cleft palates are a consequence of our fish ancestry.

I plan to post evidence for Evolutionism as I find it, to balance my pro-Creationist rants.

This is the first piece of evidence I’ve found worth posting. 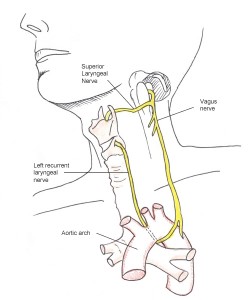 The recurrent laryngeal nerve is a branch of the vagus nerve (tenth cranial nerve) that supplies motor function and sensation to the larynx (voice box). It branches from the vagus nerve in the chest cavity before it loops around the aorta and then back up to the larynx. Why doesn’t it take a more direct route? That it takes this circuitous detour is cited as evidence of evolution.

The extreme detour of this nerve (about 15 feet in the case of giraffes) is cited as evidence of evolution as opposed to intelligent design. The nerve’s route would have been direct in the fish-like ancestors of modern tetrapods, traveling from the brain, past the heart, to the gills (as it does in modern fish). Over the course of evolution, as the neck extended and the heart became lower in the body, the laryngeal nerve was caught on the wrong side of the heart. Natural selection gradually lengthened the nerve by tiny increments to accommodate, resulting in the circuitous route now observed. 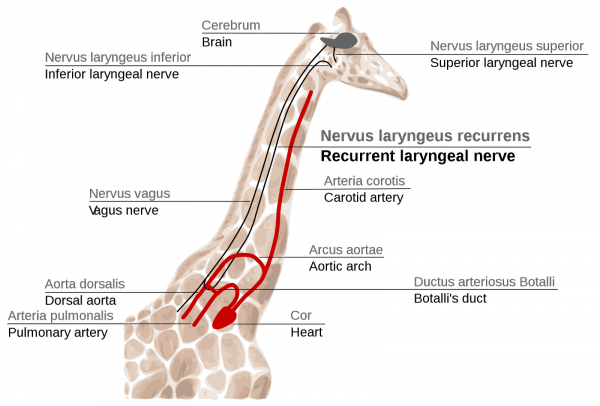 I have a question. How difficult would it be to genetically re-engineer a giraffe (or a human) so that the recurrent laryngeal nerve passes directly from the brain to the larynx?