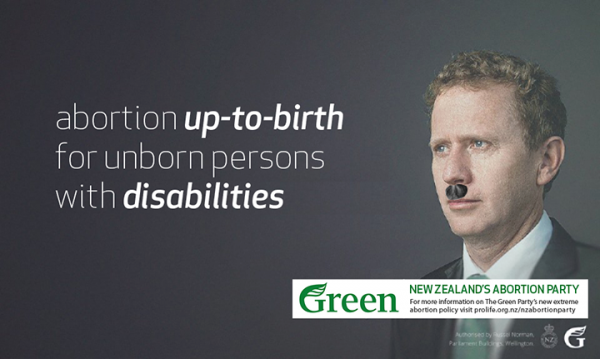 The Green Party will decriminalise abortion and assert the right of women to make decisions regarding their own health and the wellbeing of their family or whanau.

But will the Green Party assert the right of unborn women to make decisions regarding their own health? Check your born privilege!

Abortion is currently a crime under the Crimes Act. It is only legal if two consultants agree that the pregnancy would seriously harm the woman’s mental or physical health or that the fetus would have a serious disability.

So let’s get this straight. Abortion is already legal if “the fetus would have a serious disability.” That’s disability based discrimination, isn’t it?

“The Green Party trusts women to make decisions that are best for them and their whānau/family,” Green Party women’s spokesperson Jan Logie said.

“The Green Party believes the time has come for New Zealand to take an honest approach to abortion, to treat it as the health issue it is, and remove it from the crime statutes.

I think the time has come for the Green Party to take an honest approach to abortion, and acknowledge that abortion is killing an unborn child. Abortion is a form of infanticide.

“The fact that 99 percent of abortions are approved on ‘mental health’ grounds and that rape is not grounds for an abortion reveals the dishonesty of the current legal situation.

“By keeping abortion a crime, New Zealand has created an unnecessary stigma around abortion that has led to delays, erratic access to terminations depending on where you are in the country, and unnecessarily late terminations.

Perhaps there should be a stigma around killing babies. Nice to have?

“Decriminalisation will reduce the stigma and judgement that surrounds abortion, and enable abortions to be performed earlier in pregnancy, which is safer for women.

“Our policy will ensure that women have access to neutral counselling, if they want it, and that women who choose to continue with their pregnancy are given more support and are not financially penalised for doing so.

“We would also ensure parents are fully informed about the support available for families and people living with disabilities and address discrimination against disabled people that exists in the current laws around abortion,” Ms Logie said.

I don’t see how the Green Party can “address discrimination against disabled people that exists in the current laws around abortion” by amending the abortion laws to make it legal to kill disabled people in the womb. But maybe my head’s just too muddled by smoking too much of the other thing the Greens want to decriminalise?

Some people have raised concerns that our policy might allow abortions post 20 weeks based on disability. This is not the intent of the policy. The Greens have a commitment to human rights and the acknowledgement of international obligations runs under all of our policies. The UN Committee with responsibility for the Convention on the Rights of Persons with Disabilities (CRPD) has already ruled that any distinction in abortion law on the grounds of fetal abnormality breaches the CRPD so our policy will not do that. The intent is to re to allow abortion after 20 weeks for a baby who has conditions so severe that they are extremely unlikely to survive post birth.

Provisions later in the policy make it clear that we wish to extend protections against disability based discrimination.

We just read (above) that abortion is already legal if “the fetus would have a serious disability.” Is this the disability based discrimination the Greens want to protect against?

Also, if a baby has “conditions so severe that they are extremely unlikely to survive post birth,” why not just let nature take its course? That would be the Green thing to do, after all.

I’m not sure what disgusts me the most. Killing babies in the womb or the Green Party’s blatant contradictions, Orwellian newspeak and senseless rape of the English language.