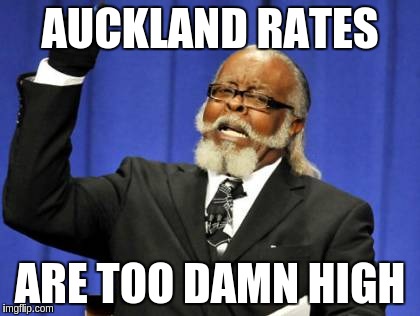 Auckland rates are already too damn high, and they’re about to get unaffordably higher next month because Auckland Council voted for a 9.9% rates increase!

is the theory that the common people know what they want, and deserve to get it good and hard.

Are you an Auckland ratepayer? If so, did you know that what you wanted was a 10% hike in your annual rates bill? If not, then please mark 10 June 2015 in your events calendar and get the bones of your sorry ratepayer ass to the Mt. Eden War Memorial Hall at 487 Dominion Rd next Wednesday at 7:30 pm.

Auckland residents Ray Calver and Dick Cuthbert are part of a group of concerned ratepayers organising the Auckland Rates Increases Public Meeting to be held June 10. “There is widespread anger at the imposition of an average 9.9% rates increases across Auckland. It particularly hurts those in poorer parts of Auckland where residents of Mangere face increases of 16.9%.”

Mr. Calver says “The purpose of this meeting is to give Aucklanders an opportunity to voice their opposition to the increases and also to plan how they would like to make this opposition known.
The meeting will be addressed by several speakers who have a variety of ideas on how ratepayers can take a stand against the Council’s rates plan.”

The meeting will be held at Mt. Eden War Memorial Hall 487 Dominion Rd on Wednesday June 10 commencing from 7:30pm. Confirmed speakers are

“Following speeches, there will be time put aside for people to ask questions of the speakers and also voice their concerns about the rates increases. The meeting organisers and I look forward to hearing how those who have attended wish to proceed.”

Do the common people, the ratepayers of Auckland, really know what they want? Because I do. 🙂

What they want is to give profligate philanderer Len Brown and his fiscally feckless teammates the inglorious defeat they deserve, good and hard.

What they want is an Affordable Auckland.