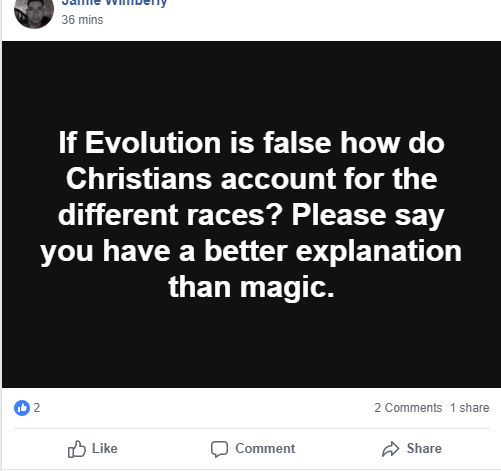 This question (above) was asked on a facebook debate page and my answer follows below.
This is a subject fundamental to why/ how I myself abandoned atheist evolution and became a Genesis literal bible believer… I Followed the evidence…..

The following is my reply to the above moot….

This is basic Biology.
Not hard to understand… even though so many Atheist evolutionists certainly dont get it.

Its written in our genes…. there is only *One human Race*
(Genus) yet there are basically three subgroups (species) Caucasoid, Mongoloid, and Negroid… all Humans (and groups) today being explicable in terms of ratios of these sub groups… that have come about by sexual reproduction either in Segregation or hybridization (mixing).
*No New Genes* are required to create the distinct characteristics… this happens via *combinations of dominant and recessive genes (Mendels Law) 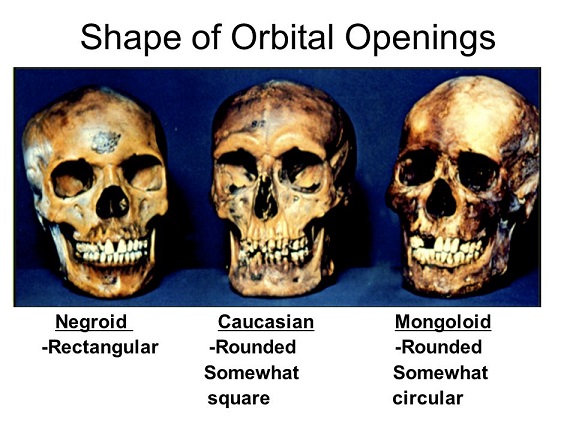 Why are you and your Brother and sister different and not identical?
Do you know that the potential genetic variation between just a single couple is they could hypothetically have several Billion children… all slightly different genetically!

So When God separated the great mass of Humanity at the Tower of Babel… different goups began to migrate throughout the world *separating* themselves into *Gene pools*… each with different sets of dominant and recessive genes… and the further they separated… the more they interbred and the Dominate Genes started to develop *Physical Traits* that were peculiar to each gene pool (while the underlying fact that we are all still humans never altered and is why we can still interbreed… a Nordic Giant can still produce offspring from a Hottentot… because we are all still a single *kind* …. human beings. )…

From Babel… thousands of years ago… some who traveled in one direction became white… some who traveled in another became black… etc etc… yet we are still fundamentally the same…underneath the skin….
And these genetic laws have been understood for millennia even before Mendel proved scientifically *why*.
Farmers have always taken their best animals and bred them together… etc etc… and this is how we have different *breeds* of Dogs, cattle, etc etc.

This is just a basic outline of why…. there is much more… yet this will suffice.