Everyone’s entitled to David Brinkley’s opinion, but they have to pay for Ashleigh Brilliant’s thoughts.

Mr. Brinkley, the television journalist, says he has been the victim of “a shakedown.” He says the culprit is Mr. Brilliant, but more than that he won’t say: “I don’t want to get into it because I don’t want him coming back at me. We’ve paid him off. Now I just want to get rid of him.”

Mr. Brilliant’s racket: professional epigrammatist. Creating and copyrighting pithy mottoes has been his livelihood since 1967. So far, the 63-year-old former history professor has copyrighted 7,540 aphorisms, which he licenses for postcards, T-shirts and other products. They range from his favorite, “Fundamentally, there may be no basis for anything,” to No. 7,540: “My plan is to get through life without ever having a plan.” And they include No. 461, copyrighted in 1974: “Everybody Is Entitled to My Opinion.” 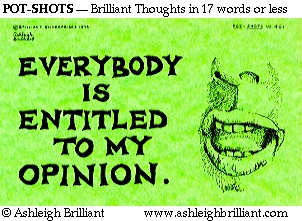 After Mr. Brinkley’s book with a similar title was published last fall, Mr. Brilliant wrote him a letter saying: “I have always had the utmost respect for you and your work … but I am sorry to tell you that there is a legal problem.” Noting that Brilliant v. W.B. Enterprises Inc. found that even a short, catchy phrase is entitled to copyright protection, Mr. Brilliant explained, “I am obliged to fight tenaciously to retain those rights, because my entire livelihood depends on it.”

Mr. Brinkley acknowledged in his book that he paid $1,000 to a friend of his daughter, Edwin Craig Wall III, for thinking the title up one night over dinner.

But Mr. Brilliant thinks Mr. Wall was just “subconsciously quoting” the saying, not creating it. “I impute no dishonesty to Mr. Wall,” Mr. Brilliant wrote to Mr. Brinkley, “but there is also a very good possibility that he had somewhere encountered it on one of my products.”

Indeed, the world of epigrams is fairly well-mined with Brilliant copyrights waiting for infringement. He has now settled 134 infringement claims, he says.

And in this case, too, he won in the end. Random House, which published Mr. Brinkley’s book, paid him $1,000 for the rights without agreeing to or contesting Mr. Brilliant’s claims.

All of which reminds Mr. Brilliant of thought No. 1,862: “Before you go to sleep tonight, please remember that all my dreams are copyrighted.”

My opinion is that

If restricting other people’s freedom of speech is what his “entire livelihood depends on” then it’s time to get a new job.