“Ye are of your father the devil, and the lusts of your father ye will do. He was a murderer from the beginning, and abode not in the truth, because there is no truth in him. When he speaketh a lie, he speaketh of his own: for he is a liar, and the father of it.” Jesus Christ. John 8:44 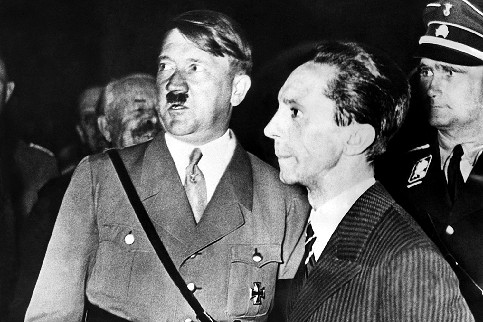 “Let them alone: they be blind leaders of the blind. And if the blind lead the blind, both shall fall into the ditch.” Jesus Christ. Mat 15vs14

In a Facebook response to my recent Blog post attacking anti-smoking Legislation, A young woman expressed support for the smoking ban in Bars, Pubs and Clubs, etc saying she believed it was right to Ban it from all ‘public areas’ and cited the passive smoking argument as vindication for her position. She said this was a subject she ‘felt very strongly about’.
Though I understand her reasoning and sympathise with her sentiments, I don’t accept her argument but see her comments as an example of the ‘conditioning’ that the Socialists running our country have ‘successfully’ engineered.
This is what I wish to talk about in this post. The dangers of State control of education, and their Massive Engines of Spin.

The Nanny state smoking bans are a product of Joseph Goebbels type mass mobocratic manipulation… of relentless Propaganda, which subtly undermines the boundaries between the jurisdiction of State power, and the Rights, liberties, and responsibilities of Individuals. It demonstrates the nature of creeping democratic tyranny accruing power unto itself and extending it’s spheres of authority and control… usurping dominion in what is properly the private sphere of personal Liberty and ethics, and trampling Private property rights under foot.
The state through the education system and an anti-smoking Ad campaign on TV and Radio, decried the ‘costs of smoking upon our society’, parading the so-called ‘victims of liberty’ across our screens…the Non-smoking Muso… the Bartender… thus ‘preparing the soil’, and ‘planting the seeds’, before they moved to impose their political ambitions upon us. Textbook Propaganda and Mass manipulation!

The Facebook response gave me pause to consider how successfully Nanny has ‘Educated’ the masses on the ‘Evils’ Smoking Cigarettes sufficiently enough to convince the majority to accept the government passing Laws which encroach upon private property rights. Of course this ‘Education’ conveniently leaves out any trace of Libertarian Enlightenment principles regarding the legitimate duties and limits of Government and The Inalienable rights and liberties of individuals! Thus What has not been taught is as fundamental to Nanny’s ‘success’ as what has been hammered home via propaganda. Seeing this stark contrast in what had been rigorously indoctrinated, and what has been completely swept under the mat I realised the great tragedy it was that this young woman had not been thoroughly taught how ‘Evil’ and unhealthy it is to have a cankerous government that does not respect Individual liberty, private property, Free enterprise, and Self responsibility!

If only our people had been ‘educated’ in the principles of justice to the same extent that they have been ‘educated’ about smoking cigarettes. Thus it is upon a sheepishly engineered ignorant population that The Socialist political parties of New Zealand have been able to pedal the lie that Private business, are ‘Public areas’/ pseudo Pubic property and thus con them into thinking the state can pass such legislation…without violation of private property rights!

I perceive that the socialists are allowed to pull off this fraud only because it suits the majority of sheeple . The nasty Hellbound deluded dunces in favour of this oppressive legislation.
Dr Goebbels would be impressed. Sheepish ignorance and Fascist complicity!

The socialists have manipulated the minds of the masses on many other topics too, justifying Big Government, oppression, and political favoritism. Eg The gross fabrications regarding the so-called breaches of the treaty by the invading British colonists, the so-called treaty settlements, and ‘First Nation’ status of Maori with special rights and privileges.
This is another travesty whereby indoctrinated lies are poured into a vacuum of unenlightened political ignorance.
This parallels with what Goebbels taught the Germans about the Jews, and we all know how that turned out!

Policy Statement 2011: As an Independent Libertarian standing in Hamilton West, If elected I would fight to repeal all laws which undermine legitimate private property rights, and would work to remove the State from Education and Health thereby reducing the States ability to indoctrinate the people with their filthy propaganda.

The Previous Blog post I mention is ‘Smokers have Rights’.

2 thoughts on “Lessons from Dr Goebbels.”