Politics and the English Language is an essay written by George Orwell in 1946.

Here are some excerpts.

In our time it is broadly true that political writing is bad writing. Where it is not true, it will generally be found that the writer is some kind of rebel, expressing his private opinions and not a “party line.” Orthodoxy, of whatever color, seems to demand a lifeless, imitative style. The political dialects to be found in pamphlets, leading articles, manifestoes, White papers and the speeches of undersecretaries do, of course, vary from party to party, but they are all alike in that one almost never finds in them a fresh, vivid, homemade turn of speech. When one watches some tired hack on the platform mechanically repeating the familiar phrases—bestial atrocities, iron heel, bloodstained tyranny, free peoples of the world, stand shoulder to shoulder—one often has a curious feeling that one is not watching a live human being but some kind of dummy: a feeling which suddenly becomes stronger at moments when the light catches the speaker’s spectacles and turns them into blank discs which seem to have no eyes behind them. And this is not altogether fanciful. A speaker who uses that kind of phraseology has gone some distance toward turning himself into a machine. The appropriate noises are coming out of his larynx, but his brain is not involved as it would be if he were choosing his words for himself. If the speech he is making is one that he is accustomed to make over and over again, he may be almost unconscious of what he is saying … And this reduced state of consciousness, if not indispensable, is at any rate favorable to political conformity.

The present political chaos is connected with the decay of language, and … one can probably bring about some improvement by starting at the verbal end. If you simplify your English, you are freed from the worst follies of orthodoxy. You cannot speak any of the necessary dialects, and when you make a stupid remark its stupidity will be obvious, even to yourself. Political language—and with variations this is true of all political parties, from Conservatives to Anarchists—is designed to make lies sound truthful and murder respectable, and to give an appearance of solidity to pure wind.

A scrupulous writer, in every sentence that he writes, will ask himself at least four questions, thus:

And he will probably ask himself two more:

But you are not obliged to go to all this trouble. You can shirk it by simply throwing your mind open and letting the ready-made phrases come crowding in. They will construct your sentences for you—even think your thoughts for you, to a certain extent—and at need they will perform the important service of partially concealing your meaning even from yourself. It is at this point that the special connection between politics and the debasement of language becomes clear.

In our time, political speech and writing are largely the defense of the indefensible. Things like the continuance of British rule in India, the Russian purges and deportations, the dropping of the atom bombs on Japan, can indeed be defended, but only by arguments which are too brutal for most people to face, and which do not square with the professed aims of the political parties. Thus political language has to consist largely of euphemism, question-begging and sheer cloudy vagueness. Defenseless villages are bombarded from the air, the inhabitants driven out into the countryside, the cattle machine-gunned, the huts set on fire with incendiary bullets: this is called pacification. Millions of peasants are robbed of their farms and sent trudging along the roads with no more than they can carry: this is called transfer of population or rectification of frontiers. People are imprisoned for years without trial, or shot in the back of the neck or sent to die of scurvy in Arctic lumber camps: this is called elimination of unreliable elements. Such phraseology is needed if one wants to name things without calling up mental pictures of them. Consider for instance some comfortable English professor defending Russian totalitarianism. He cannot say outright,

I believe in killing off your opponents when you can get good results by doing so.

While freely conceding that the Soviet regime exhibits certain features which the humanitarian may be inclined to deplore, we must, I think, agree that a certain curtailment of the right to political opposition is an unavoidable concomitant of transitional periods, and that the rigors which the Russian people have been called upon to undergo have been amply justified in the sphere of concrete achievement.

The inflated style itself is a kind of euphemism. A mass of Latin words falls upon the facts like soft snow, blurring the outline and covering up all the details. The great enemy of clear language is insincerity. When there is a gap between one’s real and one’s declared aims, one turns as it were instinctively to long words and exhausted idioms, like a cuttlefish spurting out ink. In our age there is no such thing as “keeping out of politics.” All issues are political issues, and politics itself is a mass of lies, evasions, folly, hatred, and schizophrenia. When the general atmosphere is bad, language must suffer. I should expect to find—this is a guess which I have not sufficient knowledge to verify—that the German, Russian and Italian languages have all deteriorated in the last ten or fifteen years, as a result of dictatorship.

But if thought corrupts language, language can also corrupt thought. 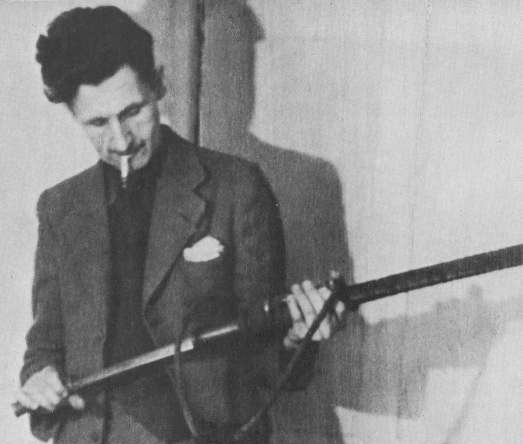 Modern writing at its worst does not consist in picking out words for the sake of their meaning and inventing images in order to make the meaning clearer. It consists in gumming together long strips of words which have already been set in order by someone else, and making the results presentable by sheer humbug. The attraction of this way of writing is that it is easy. It is easier—even quicker, once you have the habit—to say

In my opinion it is not an unjustifiable assumption that

If you use ready-made phrases, you not only don’t have to hunt about for the words; you also don’t have to bother with the rhythms of your sentences since these phrases are generally so arranged as to be more or less euphonious. When you are composing in a hurry—when you are dictating to a stenographer, for instance, or making a public speech—it is natural to fall into a pretentious, Latinized style.

This invasion of one’s mind by ready-made phrases (lay the foundations, achieve a radical transformation) can only be prevented if one is constantly on guard against them, and every such phrase anaesthetizes a portion of one’s brain.

I said earlier that the decadence of our language is probably curable. … There is a long list of flyblown metaphors which could … be got rid of if enough people would interest themselves in the job; and it should also be possible … to reduce the amount of Latin and Greek in the average sentence, to drive out foreign phrases and strayed scientific words, and, in general, to make pretentiousness unfashionable.

Here are a couple of sentences from a well-known political writer.

Art is a selective re-creation of reality according to an artist’s metaphysical value-judgments.

I leave it as an exercise for the reader to reverse engineer them into plain English.

4 thoughts on “Politics and the English Language”