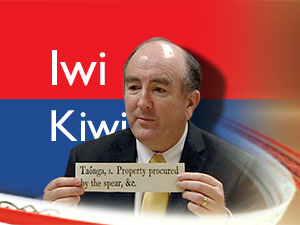 MEETINGS TO PUSH FOR A RACIALLY EQUAL, WORLDBEATING NEW ZEALAND

Fellow Kiwis,
Do you think New Zealand should be a ’colourblind’ state, where skin colour is irrelevant and all citizens have equal rights, live under the one law, vote on the one roll, and have their hard-earned taxes spent according to need, not race?
Do you notice how our racially-blended rugby, softball and netball teams routinely work together to come 1st in the world – yet our governments, with their policies of division, seem happy running an economy that’s 38th (and falling)?
Do you wonder what our champion sportspeople know about winning that our politicians don’t?
Do you think we can ever move forward as a truly competitive nation when we’re being forever dragged back to the past?
Do you know that much of what you’ve been told about the Treaty of Waitangi has been invented by dishonest politicians, academics, bureaucrats, judges, media owners and iwi leaders for their own political gain?
Do you want to see my evidence of what I call Treatygate? (Prepare to be amazed.)
Do you believe criticism is the same thing as racism?
Do you realise that when you’re called ‘racist’ for criticising the endless indulgence of Griever Maori, that’s just a trick that real racists use to keep you quiet?
Do you think maybe it’s time you weren’t so quiet?
Do you think it’s time to show those tricksters that their tricks aren’t going to work any more?
Do you think it’s time to show this government that the game’s up for their policy of appeasement?
If you’re nodding along with me, then there are three things you can do for your country:

2. Even if you’re not in those centres, email everyone on your database who is.

3. Stay tuned for more announcements about meetings in other centres. (Or better still, volunteer to organise one.)

The speech you will hear is called ‘From Treatygate to a Colourblind State – Let’s Be Worldbeaters Together!’

I hope you’ll find it interesting.

I found it very interesting.

I also found it very interesting that John said no photographs, unless by prior arrangement. Why? Not because John doesn’t want photos taken of him (in fact, he seemed quite partial to those) but because he doesn’t want photos taken of you. Basically, anonymous gravy train riders are trying to intimidate John, and anyone who is seen to support John, with veiled (and not so veiled) threats of violence.

But who am I anyway?
I’m no one special — just 1/4.5 millionth of the population, just like you, who’s had enough.
Where I’m a bit different is that I’ve worked with politicians on and off for the last 25 years, making their ads.
And I’ve learnt that these people are virtually all covering up the truth about the Treaty of Waitangi.
Because of that, I’ve spent the last year digging flat out for the truth.
And now I’m ready to share with you what I’ve found out.
I want to raise funds for a massive ad campaign to tell as many Kiwis as possible about what has been 40 years of state-sponsored deception.
I believe that once voters know how badly they’ve been conned, they’ll get so mad the politicians will have to mend their ways — or else.
Maybe we’ll have to replace those politicians with men and women of integrity.
I’ll be talking about that too.
Maybe we’ll need to persuade the most visionary and most compassionate people in the country to make themselves available to run the country.
(Refer to Singapore for what can happen when such people say Yes!)
I’m not sure where this journey will lead. But I have a feeling it will be somewhere good — for all of us.
In the end, that will be up to you, and the determination and courage you show now.
I’ve gone out on a limb and booked these four venues.
Now I want to fill them — by word of mouth, not advertising.
(I want to spend my precious advertising funds exposing the Treatygate fraud and outlining a positive solution.)
Therefore, I need you to help me fill the venues.
Will you do that?
Will you email your database right now with this link?
Thanks. I knew I could count on you!
Let’s build on the blueprint of the All Blacks, the Black Sox and the Silver Ferns and build a stronger, united, worldbeating New Zealand.
Clearing the Treatygate road block is just the start!

For more on Treatygate/Colourblind State, check my blog: www.johnansell.wordpress.com
Or phone me on 04 499 8877.