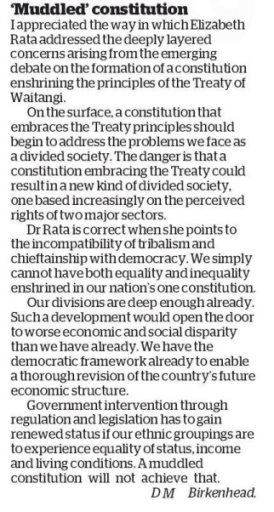 This letter displays many ‘all too common’ errors in that it starts off quite well, yet by the time it finishes, it has undone itself.
By this I mean that the writer is correct when they say that a constitution which embodies the false (separatist) treaty principles would exacerbate our already intolerable system of inequality, yet the writer fails to appreciate that the “Government interventions via regulation” as the solution to inequality… is in fact a continuation of the status quo!… ie these interventions and regulations are fundamentally the politics of favoritism, and oppression!

The purpose of a constitution is not to empower the state or parliament to pass any legislation it deems advantageous to achieving it’s political agenda, but to limit the powers of parliament to upholding the Principles of justice while protecting individuals and minorities from Mob rule, and arbitrary power.

Lady Justice is blind to Race, Creed, sex, Wealth, etc.
She holds the balances which are true. Ie the fulcrum is so positioned as not to flavor anyone.
These are principles of justise and they determine what it means to be governed by the rule of Law as opposed to the rule of whim.
Governments which write laws in contravention of these principles are establishing injustice!
A proper Constitution forbids the generation such unjust legislation.

So many people have been duped by years of socialist democracy into mistaking the mandate of the majority as being the rule of Law.
It is no such thing. Without constitutional restraints which embody universal principles of justice (such as equality before the Law), the mandate of the majority is purely arbitrary and oboundless…. only dependent upon the whims of the biggest Mob.

It is surprising to me that so many people whom are actively attempting to End treaty separatism fail to understand that we got into the current Apartheid mess because of the unchecked mandate of the majority… not because of the treaty.

It was not the minority of Maori radicals whom created the current apartheid state, but the Predominantly/ majority Pakeha parties…. Full of socialists whom believe all the anti-western, and anti-capitalist doctrines of intervention and indigenous rights.
Having swallowed all the anti-British colonization Myths and doctrines which teach Maori suffered a holocaust at the hands of invaders and were cheated and dispossessed of their lands in violation of the treaty… They began to dance to the Beat of the Maori Radicals.
Being free to simply Ignore the principles of Equality before the Law, It was the Majority parties, National and Labour whom perpetuated the lies of the treaty principles which sever our Nation racially in twain… all in the face of the fact that the treaty granted all the peoples of New Zealand equal rights as Brittish subjects, and that Hobson declared to each chief upon signing the treaty “He Iwi’ Tahi Tatou”… “We are now one people”.

This institutionalized racism demonstrates the evils of not having an ironclad constitution which would nullify any and all laws which are unequal … even if it is the will the majority to create them!
It was New Zealand shamefully childlike refusal to cut the final cords from Mother England and establish ourselves as a republic, in spite of the fact that England had granted us self government many generations ago!
Foolishly many believed remaining in the commonwealth was a form of protection, when in reality it left us exposed to popular Machiavellianism.

It’s true to say that the separate electorol rolls have proved the evils of Racist institutions… though like their modern ‘closing the gaps’ counterparts were created by ‘socialists’ seeking to improve justice, yet ultimately it was the ‘liberty’ to ‘wheel and deal’… which allowed the Majority to pander to the separatists whom held the ballance of power.
Yet so many whom oppose the treaty graveytrain which resulted, actually fear shacking parliament… you hear them talk of ‘activist judges’. Yet Activist judges are a consequence of the status quo. ie of not having clearly defined principles enshrined in a constitution.
Those whom propagate such fears are slippery devils whom covet political power and dont want limits set for parliamentary power and the gullible and fearful believe their ruse..

I could go on to talk about why the separatists are now busy seeking to dominate all discussions about forming a New Constitution, yet I will leave that for another time.
It is suffice to say that the majority of people involved in this constitutional review… on both sides of the treaty debate, don’t understand what the Rule of Law really is, or how to differentiate it from social arbitrary power.

I support those people whom have actively spoken out about the injustice of Waitangi racism, yet there has been no real discussion of any caliber in the public arena, in respect to what is necessary to remedy it, or what a Constitution needs to embody to function as a defense against unjust law and Government power.

I mean no offence. This issue is far too important for pettiness. I offer my services to the people of New Zealand to see that this most vital of subjects get proper debate and the real issues are presented to the public mind.

3 thoughts on “State of Confusion. The Rule of Law vs The Mandate of the Majority. New Zealand’s Constitutional Crisis.”