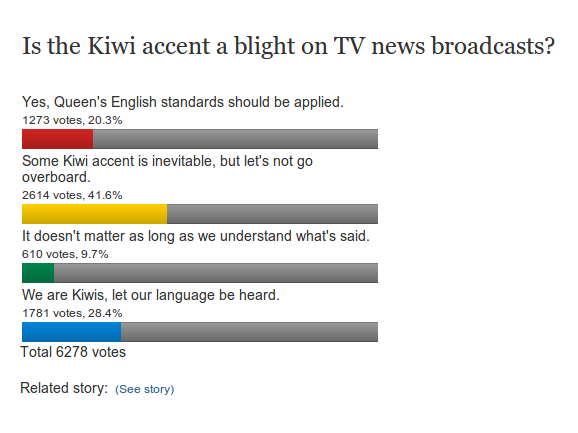 The following is an op-ed by former (?) television newsreader and interviewer Lindsay Perigo, originally published online at http://www.solopassion.com/node/7876. But don’t read it there, and don’t read it here, either. Read it on Stuff Nation, where, in just a couple of days, Perigo’s piece has attracted 490 comments (last time I checked). Nice one, Linz!

I wonder how many television viewers there are like me for whom watching the six o’clock news on TVNZ or TV3 was until recently a staple of their daily routine, but who now repair to online sources for their news because the network bulletins have become unwatchable – or more precisely, unlistenable?

An army of airheads has been let loose on the airwaves who have no business being anywhere near a microphone sounding the way they do. They don’t speak, they quack.

Many newsreaders and most reporters on flagship news bulletins now sound like panicked ducks at the start of the shooting season.

Their employers, far from being alarmed by the situation and sending their uneducated charges off for remedial speech training, embrace the barbarian triumph as a victory for the authentic Kiwi accent. It is nothing of the sort.

The quacking epidemic spawned by TVNZ and TV3 is now a national plague and an international joke, an unseemly blight on a nation claiming to be civilised.

The newsreaders’ quacking, droning, grunting and mumbling are our worst form of noise pollution.

Their “yeah-no,” “you-know,” “like, like,” “awesome,” “cool,” “wodevva,” and so on are the bane of coherent conversation. Their mangled vowels and muddied consonants make swine sound educated.

They are clueless about the distinction between “children” and “choowdren,” “Wellington” and “Wawwington,” “vulnerable” and “vunrable,” “the six o’clock news” and “the sucks o’clock news,” “showers” and “showwwwwwaz,” “known” and “knowen,” “well” and “wow,” “health” and “howth,” “New Zealand” and “New Zilland”.

The locus of their emissions is not the mouth, but the nose. Their assault on the English language is a [N]ational scandal. Theirs is not an accent; it is a disease.

In their childlike glottal stops (“thuh office”), their selective emphasis that is 100 per cent wrong (hitting conjunctions and prepositions —”Woow arroyv UN Wawwington ET sucks o’clock”), their spluttering nasality, their dim-witted droning and silly sing-song, their inability to scan ahead and phrase intelligently, our reporters are stuck at the level of an infant.

It may be that they are not truly “airheads”, but they certainly seem like airheads with such retarded speech patterns.

No, one is not demanding they speak like the Queen, but is it too much to ask that they sound like educated adults?

All that attention to how they look, and none whatsoever to how they sound! (Except when articulating Maori words. If it’s good enough for Maori, why not English?)

One of my pupils, a budding TV actor barely in his 20s, confessed that he was in deathly fear of being made to sound “posh.”

Sounding “posh,” he believed, would activate Tall Poppy Syndrome, be “uncool” and jeopardise his career.

By “posh” he evidently meant “plummy, like Sam Neill,” whose career doesn’t seem to have suffered for it.

I pointed to the impeccably Kiwi rugby commentary duo of Grant Nisbett and Tony Johnson both of whom speak clearly and well without sounding remotely “plummy.”

And what about the beautifully-spoken Sir Paul Holmes? Or Eric Young and Alistair Wilkinson on Sky?

What does it matter, the barbarians’ cheerleaders will ask, as long as we get the gist of what they’re saying? Dominion Post columnist Karl du Fresne answered this as follows:

‘‘I have heard it argued that none of this matters as long as we can understand what people are saying, to which my response is twofold. First, it’s physically painful to listen to some of these awful voices torturing the language; and second, it’s getting to the point where we can’t understand them. It’s only a matter of time before we’ll need subtitles on the TV news bulletins to explain what some female journalists and newsreaders are saying.’’

A New Zealand in which quacking is as universal as it’s threatening to become will intellectually bankrupt us. Its democracy will be a travesty of freedom as vapid voters who routinely quack inanities such as “Yeah, no, I’m like, oh my god, that’s so totally awesome” will thus mindlessly endorse the most unconscionable bribes offered by the most unscrupulous politicians.

Not only being able to watch the news again, but also freedom and civilisation themselves, are at stake.

[Reproduced without permission. Whatever.]