Preamble….
On the reoccurring theme of ‘what is the proper roll of Government?’ I submit to you another post about the census yet with an extra punch.
Thomas Jefferson wrote “He who governs best Governs least”. He penned the American Declaration of Independence which actually defined what the proper duties of Government are… to defend the God given rights of the individual, which is a very limited sphere of operation which does not include the supply or control of such services as Education, hospitals, arts and sports, etc… all of which are the proper sphere of Free enterprise and private voluntary associations.

^^^^ That is the Cover pic from the Government Facebook page Census NZ. Here:

It clearly demonstrates why the enlightened Kiwi is outraged by the underpinning arguments which Census NZ, and the Government use to vindicate this compulsory violation of our privacy… ie that the information gathered will be used to for their Social planning.

Bread and Circus.
Notice how this picture appeals to the unthinking… ‘the government as the font of all culture….get someone else to pay for it ‘ mentality…
‘More Drag strips, more skate parks, More Gigs and festivals, more sports…etc etc’.

Notice it completely forgets to add “More Taxes, more rates…. More Debt, more compulsions and property violations!, More Government poking it’s nose into things which are not it’s business to be involved in!

Now I like Drag strips, Concerts, etc yet I am not so stupid as to believe these things are only possible via political interventions!
I also know that every time the Government or city council builds a stadium or sports facility and events that they always run massively over budget and put us into massive debts…. And end up costing Rate payers and Tax slaves Tens of millions of dollars…. Every time!
Three examples from my home town of Hamilton will suffice as examples.

Each of these cost Hamilton Ratepayers many 10’s of Millions of dollars… over the price the Hamilton city council told ratepayers they would cost!
Via consecutive socialist medaling the HCC has racked up $500 million in debts!

And what needs to be appreciated is that this bankrupt situation is the norm across the globe in western socialist democracies… ie Socialist politicians are systematically bankrupting their captive populations! Debts are skyrocketing and Rates are going through the Roof!
Yet nobody seems to be waking up to the fact That City councils ought not to be involved in such ventures!
They are best left to Free enterprise, and voluntary associations, whom are much more realistic about how such things get build and on what scale.
Most importantly they don’t demand money via compulsory taxations upon the community!
Ie Little old ladies living on pensions don’t face rent increases or rates hikes to pay for the white elephants and delusions of grandeur which Big mouth big promising politicians spout at election time to get elected!
If the figures don’t add up… they don’t get built its as simple as that…. Ie economic reality prevails…. Not ridiculous socialist whim.
The sort of people whom support the Council/ government involvement in such things are either Ignorant, evil, or both!
The ignorant have not figured out that such things will turn around an bite them on the arse via higher rates, rents, and costs for necessities in goods and services, and the evil don’t give a damn if people whom don’t like Rugby, etc are forced to pay for New stadiums etc . All they care about is having a flash new place to worship their sporting Gods! They are too stupid to realize that Better stadiums and facilities could be established via legitimate means without the use of Draconian powers of compusion.

And below are some links to some blog posts I have done on thes subjects covering some of my own Libertarian Election campaigns standing for Hamilton city council in direct opposition to this Bankrupt big spending socialism…. 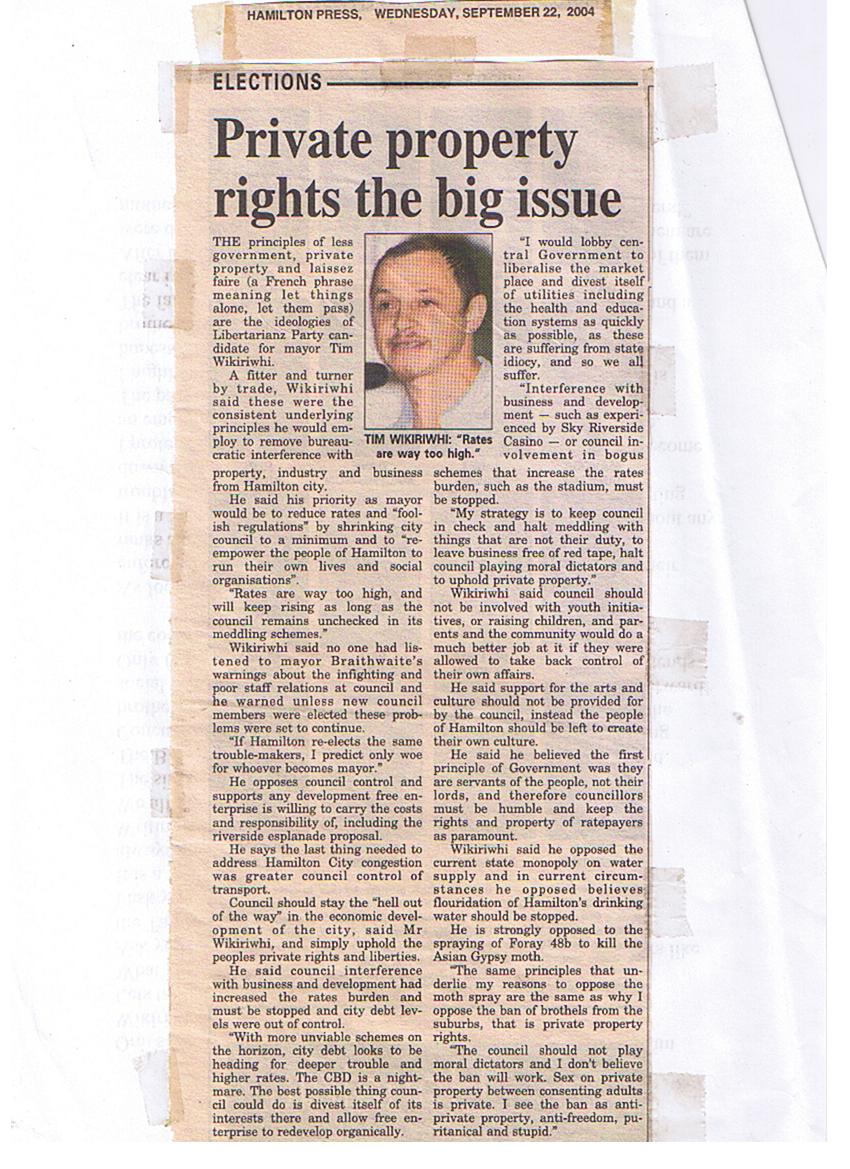 2 thoughts on “How the census meshes with bankrupt Socialist Totalitarianism”