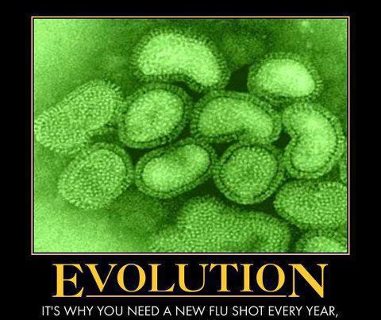 “The flu vaccine would not exist if scientists did not have a firm grasp on the facts of evolution. It is updated yearly to keep up with the evolution of the virus, which changes so much and so quickly that the previous year’s vaccine is no longer effective. How do these changes occur? You might think that the answer is mutation, but that’s only a small part of the process. Mutations are random, but the virus keeps growing more drug-resistant. Clearly there’s something else going on here.

When you get a flu shot, your body gains the ability to produce antibodies to the flu virus; if you are exposed to it afterwards, your body fights it off. The antibodies kill most, but not all of the virus particles. Some virions have genetic variations that allow them to survive the onslaught of your antibodies. They aren’t any better or stronger than the others; it’s just genetic randomness.

Eventually these survivor virions will be passed onto someone else whose body will perform the same process, helping to weed the virus population down to only those virions that are completely resistant to the vaccine. The following year when their descendants return, they will be immune to it. They will be genetically different from the ancestor virus. They will have evolved from a previous state.”

^^^^^ There you have the bold claim that *Evolution is an observable Reality*.
Yet I want people to think about this with a bit more depth.
Does the fact that life forms become resistant to chemicals or bugs… or that their genetics can be seen to be in some way different from their parents really mean they are ‘evolving’ ?

I dispute this!
I say when life forms adapt in such ways they are work within the designed parameters of their Species.
They are in no way ‘evolving’.

Thus I say it may be so that a flu virus may ‘change’ so as to become immune to our bodies own artificially enhanced defenses (re via a vaccine) … but it certainly does not *Evolve*….any more than we ‘evolve’ when we get a vaccine and start to manufacture new antibodies.

Let me suggest to you that the shyster Evolutionists have set up a scam.
The scam is they have two definitions for the word evolution… they have legitimized a form of philosophical equivocation and via cunning trickery have managed to deceive people into believing that Evolution is both the Continuity of species… and it’s transmutation.
I am referring to the scam claims of Micro-Evolution.

Real Darwinian Evolution is the claim that species transmutate from one species into a completely *new* and fundamentally *different* species like from Germ to fish. Fish to Mammal, etc.
And while I admit that this is said to be a process which takes place via thousands/ millions of tiny steps, I wish to point out that the so-called evolutionary steps are not like gaining immunity, but are like a flipper slowly turning into a foot via a linear series of fortuitous genetic accidents.

I say this ‘Flu virus argument is completely bogus because it does not involve anything like this linear transition from one specific species into another.
It is completely dishonest to say that when anything becomes immune to something that the thing has evolved.
That is pseudo science and it evidences just how vacuous the theory of evolution is in that they must grasp at straws in attempts to justify their absurd superstition.

So-called Micro-evolution is nothing more than a ruse.
I could say that your nose is turning into beak, or that a birds beak is turning into a nose!
There is *no science* at all in the so-called notion of Micro evolution.
Merely wild conjecture based upon a very doctored and systematically arranged/ cherry picked samples of comparative anatomy… and a heavily ideologically imposed interpretation of everything biological.
*This claim of Flu Virus ‘Evolution’ is a perfect example*
The Virus is not evolving but doing what it has always done… ie it is being a virus!

The reality is that many species have the capacity for a great variation while remaining true to their kinds.
Dogs are a good example.

And this can easily be proven by comparing the so-called ‘latest’ virus with the ‘older one’ and realizing that there is no discernable linear progression from some unknown pre-virus… into some unknown Post-virus life from.
Ask the Evolutionist from what is the virus evolving away from and into what is it transmutating?
The facts are the Virus is going nowhere.
It remains a virus.
It is maintaining it’s ‘Virus-ness’… and this is the exact opposite of evolution… ie it demonstrates a continuity and fundamental integrity of the species.
Tim Wikiriwhi.

Update: 17 June 13. Here is a link to an article which validates my asertions above Re: When bugs become resistant to antibiotics and vaccines they are not evolving. This one is about Bacteria…
Antibiotic Resistance of Bacteria: An Example of Evolution in Action?
Read about The Ludicrous claims of Evolution Here: 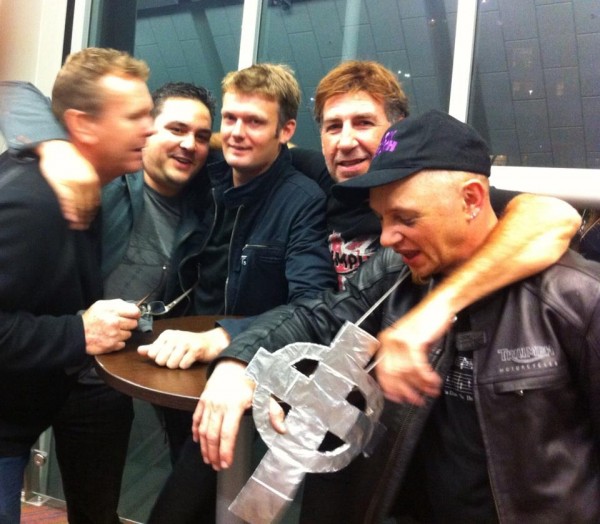 Update:
My blogpost generated immediate debate.
In the process of looking for supportive sources for my position I came across several interesting sites…
………………………………………………..
Has the HIV Virus Demonstrated Evolution In Any Way?

No! Many false claims have been made. Here are the facts.

#1 If we had an example of new information being added by a random mutation, by random chance (though we do not have any example of new information being added by random chance, neither in HIV nor anywhere else), we would not have any evidence that evolution ever took place causing one kind of plant or animal to become another kind of plant or animal. If there were such an example, which there is not, in HIV or anywhere, then we would have shown that such addition of new information could possibly happen, (though present observation implies that it is absolutely impossible, but, if an example were to be be found, which it has not, then such an observation (which is only imagined at present) would only show that such a thing would be possible.

“Viruses can have no evolutionary relationship to any other form, and so whatever may have happened to say, the AIDS virus, has no relevance to the supposed history of truly living organisms in any case. An apparently major effect is probably caused by only a horizontal or even a negative change in informational content, and therefore does not relate to the sort of evolution postulated generally. It certainly does not involve any increase in functional complexity…. Long after this article was published, the PBS/SBS Evolution series used HIV/AIDS as ‘proof’ of evolution. Yet the new data has done nothing to make the principles in this article obsolete. Rather, in one case, HIV resistance to drugs was clearly caused by a deleterious mutation, as shown by their inability to cope with the ‘wild’ type when the drugs were removed; and immunity to AIDS can be conferred by a mutation that causes loss of certain receptors on the immune cells preventing the HIV from docking on them.” ~ Creation.com

And here is an interesting you tube vid which confirms my point about Evolution’s ‘Equivocation’ and non-falsifiable pseudo scientific nature. 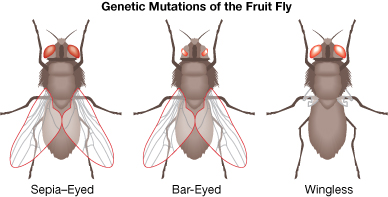 Thinking about this more… the most important aspect of this is Mutation and *the question of new Genetic information* Ie In what way do random mutations bring ‘Change over time’?
And anyone knowledgeable on this subject understands that *Mutation does not add improved codes but destroys portions of code…adds errors etc and I… though no geneticist can easily see how such a random degenerative step caused by an error in replication of a virus could fortuitously render it capable of escaping detection by our immune system… yet in itself clearly not represent any thing that can be described as an evolutionary change.
An example I have used in my arguments is the creation in the Lab of the Wingless fly.
Scientists bombarded flies with radiation and caused various mutations in their young.
One was the Wingless Fly.
Now clearly it’s genetics have been altered and a ‘new’ type of fly created… yet it is still a fly… a grotesquely deformed fly.
Other ‘mutations’ to the genes occurred too that were not as detrimental to the fly as this heinous deformity, yet none can be said to have been the addition/ writing in of ‘advanced’ DNA which can vindicate the claims of the evolutionists that mutation is the mechanism by which Germs became people… the transmutation of species… and lets not forget that that is what the theory of evolution is!
do not be smoked into thinking that ‘any’ change is evidence of evolution… or proof that the theory has merit.
Mutation is in reality a degenerative force, and the Math is so far against the wild conjecture that Mutations can be used to advance Evolution that it ranks up there with the ‘Spontaneous generation of life’ in statistical absurdities.
This is the extreme unscientific basis Atheist Naturalist evolutionist must go to deny Intelligent design and the existence of God!
Life indeed has all the hallmarks of having been designed for a purpose!

Random accidents cant draw up blueprints… cannot write turn a Model A into a Bugatti Veyron!

Raed more about that here:

One thought on “Square Circles. When Continuity is claimed as Evolution”