I had my flu shot today, have you had yours?

You can spread the flu to people, including your family/whanau and friends, who are at most risk of complications

While general health affects the severity of an infection, the influenza virus is contagious and anyone can become infected.

Influenza is more than just a ‘bad cold’. Although some of the symptoms are the same, influenza is usually much more severe. Symptoms of influenza include a cough, headache, fever or chills, body aches and pains, fatigue and generally feeling miserable

Influenza, commonly called the flu, can be a serious illness that is sometimes fatal.

Even if you do not end up in hospital, influenza can keep you in bed for a week or more, preventing you from doing work, sport or just about anything that requires leaving the house.

The flu spreads from person to person. The influenza virus is transferred in droplets of moisture expelled through breathing, coughing and sneezing. The virus is spread when a person touches any droplets which contain the influenza virus and then touch their mouth, nose or eyes before washing their hands.

Influenza can infect up to 1 in 5 of us every year.

Influenza can affect anyone, no matter how fit, active and healthy they may be. Although people with underlying health conditions are most at risk from influenza associated complications, previously healthy people can still become seriously ill an even die.

Approximately 400 deaths each year in New Zealand are related to influenza infection.

We cannot predict from year to year how severe the influenza season may be. The flu virus can change yearly and new strains can emerge to which people are not immune.

To maintain the most effective protection against influenza, annual immunisation is required.

It takes around two weeks to develop immunity once vaccinated. Ideally, immunisation should be carried out before the main influenza activity in May to September. People can be immunised at any time during the influenza season, but the vaccine is only free for those in the high-risk groups until the end of July.

Stop the spread of the flu

If you are unwell, stay at home until you are better.

Immunisation may be FREE for you. Ask your doctor or nurse today.

This season’s ‘flu’ could be worse because of the new influenza virus commonly known as Swine Flu. 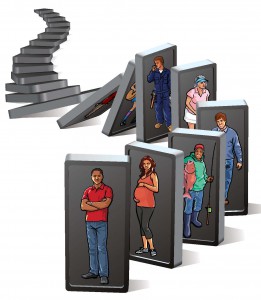