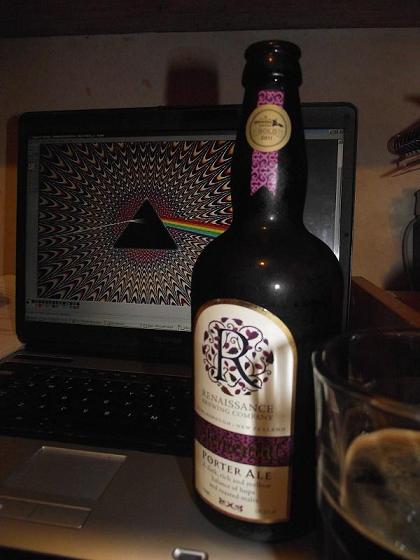 What a fine drop this is!!!!
6% too! 😀
Take note Richard G of the statement below!
esp… “Beer of Choice”…. “a supprising effective accompaniment for Dark chocolate, coffee,…”

Elemental is our most awarded beer, it has won gold medals in Australia and New Zealand and for a time it was rated New Zealand’s top beer, no mean feat for a porter of moderate alcohol and a balanced finish.

Originally the beer of choice for workers in London’s produce markets, the beer was a mixture of the previous nights slops that the “porters” would drink when they clocked off at dawn. Porter is also Andy’s all time favourite beer style. Brewed in the modern ‘robust’ style, Elemental Porter is a rich, full bodied brew with plenty of dry, dark chocolate and roasty malt flavours which gradually give way to a cleansing hop-driven finish.

Not intuitively thought of as as a food beer it is a surprisingly effective accompaniment for:

•Dark chocolate
•Coffee or berry-based desserts
•Blue cheese
•Barbecued meats
And although historically it was a sunrise beer, we think nowadays it is probably more suited to an be served after dinner with desserts and cheese, although if you want to drink it at day break, we’re not going to stop you.

^^^^quote is from here: http://www.renaissancebrewing.co.nz/content/elemental-porter-ale-craft-beer.html 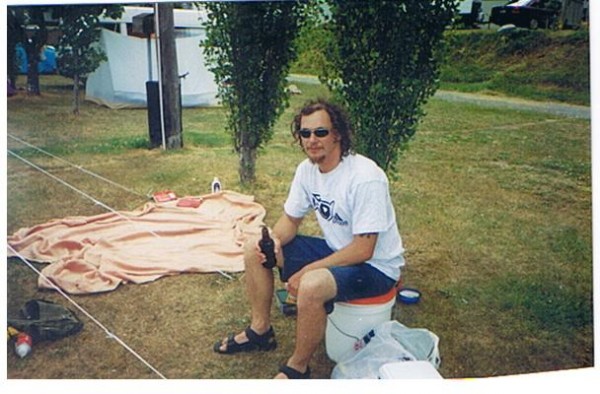 Grunge Miester Tim Wikiriwhi Queenstown Motorcamp. New Years Day 1999.
That’s a Montieths Black… Porter Ale! …. actually may be a Black Mac. 🙂
My Fav beer for 20 odd years was Waikato Draught, yet that was notoriously hard to get on the Mainland, and so on that ‘mission’ I was buyin up Montieths Black (you can get it by the Jug down there!) and also swillin Black Macs.
That bottle looks more like a Mac one than a Montieths.
And for the record both Black Montieths and Black Macs are bloody good ales!
Despite being bought out by Big Brewers…
I present that quote from Renaissance Brewing as evidence against previous remarks by my fellow blogger… re My endorsement of both Porter Ale and in particular Boundary Road Chocolate Porter Ale.