Richard Goode I’m a libertarian. I believe in individual freedom and personal responsibility.

I see far too many people blaming “K2” for their problems, when their own lack of judgement, lack of a moral compass, psychological problems, and lack of parental control are the root causes in the vast majority of cases. Like that teenager supposedly “addicted” to K2 whom I saw on TV the other night. He was fine once someone found him an honest job boring post holes up [in] the hills.

Remember that cannabis is a gift from God and that the Devil makes work for idle hands.

That was my post [with minor edits] on the Facebook group K2 and Other “LEGAL HIGHS” in New Zealand we all need to know the dangers. I was added to the group recently by a fellow drug law reform activist and didn’t at first appreciate the nature of the group. It’s a support group “to warn people about the dangers of these relatively new highs and the trouble it has caused so for many.” Perhaps if I’d known that I’d blundered into a support group, I wouldn’t have made such an insensitive post. Perhaps.

Here are the responses.

Tracey Metternich supposedly “addicted” Richard do you not believe it is addictive? lack of parental control? this I disagree with strongly. I am guessing he wasn’t as good as it looked on TV because this teenager found an honest job he was fine. I bet he struggles everyday and he still thinks about it everyday.Cannabis is a gift from god? shame people decided to speed up the natural process and grow in under lights instead of planting a seed and leaving it to grow. Yes it is the lesser evil but it can cause problems for some but not to the extent this chemical crap is doing and it would be a safer option.

Polli Marriner Hayden is not fine . That’s why he spoke up. You have no idea of the pain he goes through every day, or his mother! How DARE you minimise the harm to push your own barrow! You people are the evil! Kids do not need drugs! It was pot heads who brought this stuff into our country and made a demand for it by trying to escape from reality through chemicals. Live a real and godly life in THIS reality before you judge others!

Richard Goode “Live a real and godly life in THIS reality before you judge others!” It’s good advice.

Tim Wikiriwhi I suppose you Polli Marriner are going to blame Nz’s Suicide epidemic of ‘Pot heads’ too! You simpletons seen to forget that like Suicide, drug use is *an Effect* of deeper underlying issues in our society… not the cause of them. Young people try drugs (including alcohol Polli) for different reasons, often it is to sooth a painful heart or to fill a dark empty void… and as you know sometimes a drink (or a smoke) can help… other times it can make things worse… One thing is for sure… persecuting people certainly makes things much much worse, whereas when things like K2 are legal, at least no one is getting kicked over and criminalised by a cold hearted Nazi police, and they can get help for what is *the real problem*… the ussues which have nothing to do with drugs… yet simpletons like you cant e bothered thinking about the deeper/ more complex problems in our society which result in high suicide rates, high drug use, etc…. You prefer to think like a pig and say ‘Ban it’ ‘Ban it’…. Throw them in Jail…. Give the police greater powers!…. More raids!…. Zero Tollerance… “Everyone should be like me!!!”… vote for the Populist Politican who promises to be ‘Tuff on drugs’… etc etc…. year after year… decade after decade…. yet the Stats keep getting worse and worse…. yet you will continue to floog your favorite dead horse because you refuse to consider you have been wrong your whole life….

Polli Marriner Lol…. That’s so funny! If you only knew!

Richard Goode “You people are the evil!” Judge not, that ye be not judged.

Polli Marriner Therre have been a lot of pot smoking people in these anti K2 groups hurting people’s feelings and linking the fight with support cannabis efforts. NOT HELPFUL AT ALL! Gof iChat your own battles in your own page and leave these heroes alone!

There’s irony in a rabid Prohibitionist telling me to “leave people alone”! There’s irony in her judging that “you people are the evil” and in the same comment reprimanding me for judging others! (Just saying.)

Subsequently, my post was deleted by the group admin, presumably for its unsupportive tone. (But I blame Tim’s comment. :-D)

First, there are some seriously upset people out there. It’s understandable that they’re upset. From what I’ve read of their stories, some of them have been to hell and back, and they blame it on K2. Indeed, it does seem that some synthetic cannabinoids can have some very serious ill effects on some people.

Second, these people should not be allowed to have any sway over the government’s drug policy. With all due respect, they’re too emotionally overwrought and they can’t think straight. We need to regulate, not ban.

I stand by my original remarks. 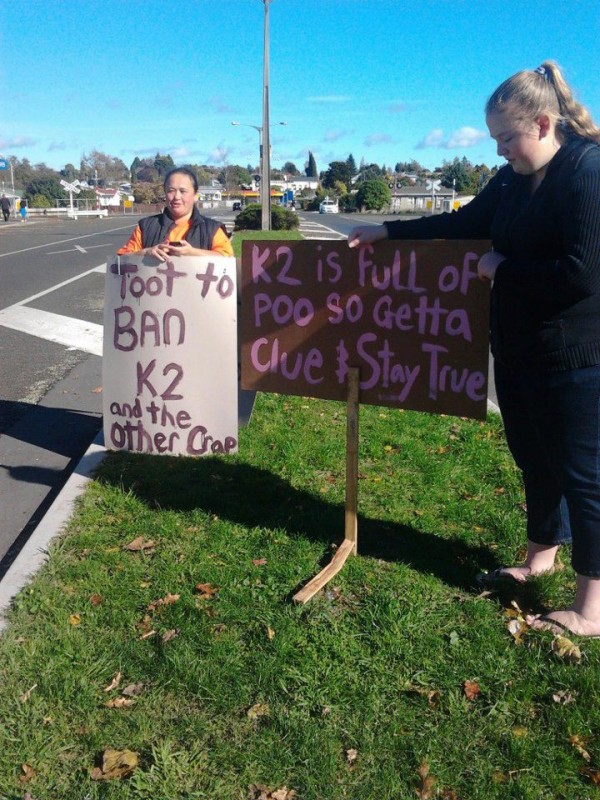 2 thoughts on “The big problem in New Zealand”