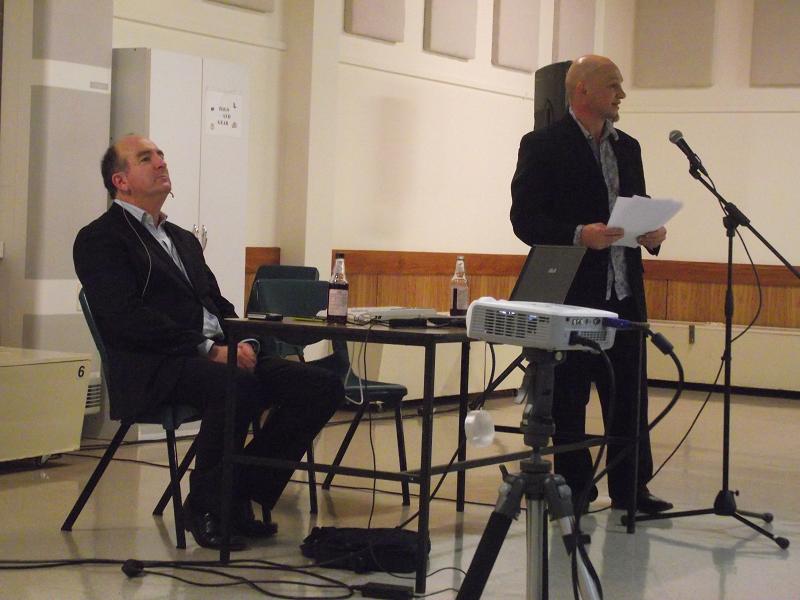 Tim Wikiriwhi introducing John Ansell at the Waikato TREATYGATE Presentation, Thursday 16 May, at the Celebrating Age Centre in Hamilton.

Though I had planned this meeting for over two months, it was typical for me to be still hurriedly typing out script mere minutes before I was to deliver them.
Libertarians Peter Creswell and Robert Palmer traveled down from Auckland to give John and myself some moral support, and they listened to my only practice delivery from a ruff draft… as they enjoyed an Epic Stout.
They offered me several good improvements, before heading downtown.

I had written much more than what I delivered.
This is a subject I am passionate about yet my speech was only an introduction and personal endorsement of John Ansell’s TREATYGATE presentation which he is busy delivering about the country…. So unfortunately though there was much which I would have liked to have said… many things which may have helped Maori People to better appreciate why I support John, there was no time for me to do so.

I would like to thank everyone who helped John and myself make this event happen… those who contributed donations, those who came to the meeting in support (I got to meet some of my face book friends!), those who helped set up the hall, the Waikato Times, and Hamilton News staff, and others who helped me with advertising, sound systems, etc.
It was great to see Allan Titford, his new partner and child who traveled quite a distance to support us.

I estimate there were 60 people in attendance which is not bad for a political meeting.
The Waikato Times had a reporter there.
And our ads reached many thousands of People who, though they never attended the presentation, will know that there are Activists afoot, working to end Waitangi Separatism and establish racial equality before the law.
This is a mammoth task and every event like this held in the name of ending the shameful travesty of Watangi apartheid and the grievance industry… all helps.

The evening ended at the House Bar, yarning, joking, and drinking Pitch Black Stout from the Tap. One of the manifold blessings of British Colonisation!
Very nice!

My speech follows…
…And below that… is a link to a Waikato Times/ Stuff article on our Hamilton Treatygate meeting, and subject matter, and I make a few observations about comments it contains from a Waikato University ‘Treaty expert’ the Times also interviewed for the article.

“Good evening Ladies and gentlemen.
It is great to see you.
Thank you for coming.
I know many of you have traveled some distance to be here.
Your support is very much appreciated.
My name is Tim Wikiriwhi,
I live here in Hamilton, and work as a self employed contract engineer,
and it has been my pleasure to organize tonight’s meeting, for John Ansell to deliver his Treatygate message to you.

John is a very brave Pakeha, that is to say he is a brave New Zealander.
He will be speaking tonight for about an hour on one of the most important issues facing our Nation at present.

I myself have been involved in politics for well over a decade, and spoken many times around the North island on the ever worsening evils of Treaty separatism, Maori Radicalism, and our shameful Apartheid laws and government.

I hope that while you are here tonight John and I are able to communicate the gravity of our current political situation, and the race relations crisis which has been systematically manufactured because of an Evil ideology, which has taken full advantage of some serious faults in our democratic system.
I hope we impress on you the urgency and dire need for the people of New Zealand to Rally, and to organize ourselves into an Irate lobby determined to rid ourselves of these cancerous growths… and establish racial equality before the Law.

The shear scale of the Political extortion…Hundreds and hundreds of millions of Dollars! The utter Fabrications and falsifications of our colonial history by which a collective guilt trip has been heaved upon the backs of Non-Moari New Zealanders …so successfully, that they quietly submit to this Extortion, and tolerate being rendered second class subjects in their own country.
I say We must smash the Anti-colonialist lie that stupefies so many New Zealanders into believing they have less right to Fully enjoy this country, than their neighbor who has a fraction of Maori DNA.

Now the fact that Race based Law is a travesty of justice should not really be News to anyone.
Who does not know about the times of Slavery and Segregation in America?
Who has not herd about Apartheid in South Africa’s recent past?
Many Kiwi already know that the Law should not discriminate because of race.
The trouble is that so few of us actually have the courage to stand up in public say it!
New Zealanders actually allow their government to mass produce Racist law and give away millions of Tax dollars all because they have been deceived by a massive political propaganda campaign!
The Lying racist Radicals use intimidation and the Anti colonial guilt trip to dominate and steer our country towards every deeper Racial separatism, and Rapine…. And the power-hungry socialists of both the Labour and National parties have made bargains with these racist radicals for the sake of securing Election victory…time and time again.
Thus our Government has been utterly corrupted and used to indoctrinate New Zealanders, both Maori and non-Maori into thinking that it is the fault of others that the so many Maori are violent criminals.
The Radicals want you Pakeha to continue to believe it is actually your fault that so many Maori suffer Ill health… live in poverty…. are in low paid jobs, or wallow in welfare dependence.
Well John Ansell has figured out what a crock that all is and he has the Balls to stand up and say … “Get Real!”
John forthrightly declares “Im A Pakeha and I refuse to accept any such guilt!”
“I demand My equal Rights!”
I demand an end to the extortion, an end to the State Racism.
I want to live in a country of Racial equality before the Law!”

You see John has figured out that He’s not to blame for any of that Maori misery…and that he’s got nothing to be ashamed of…being a Pakeha…. And that if anyone is to blame for the misery of Maori today it surely must be the individuals themselves, who have allowed themselves to become depended upon welfare, not bothered to gain the necessary skills to compete with Non-Maori in the Job market… Skills which are essential to provide them with a decent income in a modern free society… and Blame also may be squarely laid at the feet of the racist radicals whose Toxic and hateful lies have fill so many Maori heads with a Victim mentality and vile racism… preventing them from taking ownership of their own problems, and appreciating their own self responsibility for climbing out of this misery they have created for themselves.
Until they do, no amount of special rights, no amount of Welfare will save them.

It’s time for me to hand over the mic To John.
I want to finish by saying… Lets rally together and get rid of the Racist electoral rolls and race based seats in parliament which are a pox and a shame upon our democracy, and PLEASE do not allow the separatists to establish a new racist constitution.
They must be stopped at all costs.
.I now give the floor to John.
Thank you for listening.” 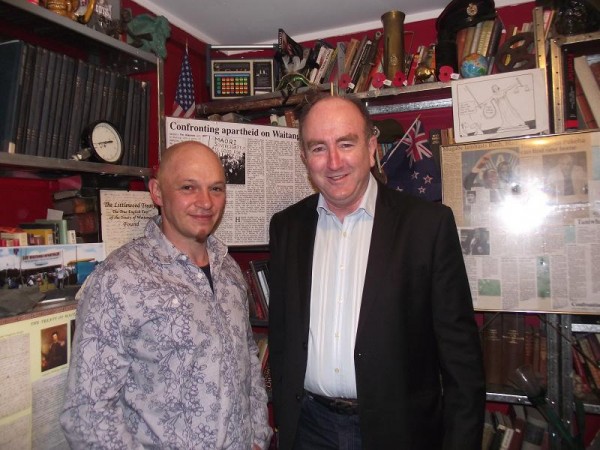 I would like to make a few comments on this article…
Observe…
‘Angeline Greensill teaches Treaty issues at Waikato University and she would be interested in who would attend the meeting.

”It’s the sort of thing I would normally ignore but it’ll be interesting to see who does turn up and who is taken in by this type of stuff. I ned to be aware of that.”

She said Mr Wikiriwhi has a history of throwing his beliefs out to ”a misinformed public. She said people should learn the difference between rights and privileges and rights and obligations.
”It is not a privilege. Maori are tangata whenua of this country and there was an agreement signed that was never kept and it was an agreement about rights.

”They are getting things because they have a right to them. They have a property right like anyone else except they have to fight for them.”
End quote:

^^^ I say Angeline has provided us (above) with a perfect example of the sort of Socialist Academics our Government hires to indoctrinate our young people!
Note how she calls into question the mentality and character of those whom thought John and My own message against her Political indoctrinations of Treaty separatism was worth hearing!

Note how she blatantly suggests that the treaty enslaves Non-Maori to certain ‘moral obligations’ (Read Money, Power, Political favouritism, etc)… simply because the Modern Radical separatists claim Maori to be ‘Tangata Whenua’…which is of course an absolute lie, and part of the Modern Re-fabrication of New Zealand history and perversion of The Treaty!
Maori of old were proud to say they were Migrant Colonists too!
The ‘Tangata Whenua’ were the People living here already when Maori arrived!
Yet why let the truth get in the way of your Political vested interests… when a lie suits so much better… Aye?
Lets label those who dare speak the truth troublemakers, and Racists, and Mad men!

Thank you Angeline Greensill for clearly exposing your agenda for all to see.
Thank you for demonstrating just how evil it is to allow the Government to control the Education of our nation!
I only wish that New Zealanders would wake up to why the Government ought never be allowed to control such a vast engine of indoctrination, propaganda, and mass manipulation.
Too many people who understand that Government ought to be banned from producing racist laws, fail to understand Treaty separatism clearly demonstrates the Libertarian principle that the State must also be separated from Education, because it has been via state control of the education system, which has given the Socialist Political parties the ablity to use the education system to imprint their political agenda directly into the public mind, by hiring such socialist racist academics as Angeline Greesill and deploys them into our schools and universities to directly brainwash our people into accepting the vile rehash of our Pioneering colonial history and the separatist ideology behind our Apartheid system.
They also do this with their Green Agenda, Re Man Made Climate change, the Theory of Evolution, Socialist ecomonic theory, etc etc… all designed to delude the sheeple into supporting their Heavy Taxation, their Nannyism, their Totalitarianism… and to fear/ hate Freedom.
Tim Wikiriwhi.
Libertarian Independent.