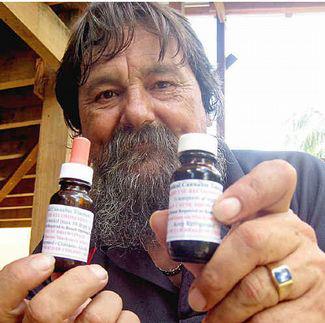 Any one with Children who suffer from Fits and Seizures needs to watch this Video!
If you know anyone with children who suffer Fits and Seizures please forward this Video to them!
It could save their lives.
It is a matter of extreme urgency that Medical Cannabis be Legalised and made available to the New Zealand public!
IF had a child with such a condition, I would not hesitate to break the Law and get some of this Medicine for my child.

Tony Bower is a hero who is battling Prosecution for Cannabis cultivation to produce his wonder Medicine. I implore the people of Australia to Rally in his defence.

This section of the Antique Cannabis Book, was meant primarily as a tool for active News Media Reporters who needed a quick (yet well documented) source of information on the subject of Governmental Censorship as it relates to Medical Cannabis. As such this (1947) study, which was openly published and never actually under the threat of censorship, would normally not qualify for inclusion.

However, a quick look beneath the surface shows a different story. One that reveals, wheels within wheels, circles within circles, all spinning around . . . . let’s just say that this study, came very close to (ah, how shall we put it), going the way of oh so many other Medical Cannabis studies.

The author is convinced that had Anslinger (or anyone at the D.E.A.) known about the study BEFORE IT WAS PUBLISHED , it most assuredly would have been CENSORED. Either that or (doing what the Narc’s do now), killed it in its cradle by simply denying the researchers the needed licenses and permits.

This one however, seems to have slipped though the cracks. Here let us go over the facts (those we’ve been able to locate), and let the reader to decide.

1.1 – STUDY SUMMERY
The following, located via 420 Magazine [1] is the shortest summery that we’ve been able to find. However, as it’s still filled with lots of PHD gobble goop, so the reader is advised simply to skim-read-it. The long and the short of it is that “ Cannabis Works. ”
Anti-Epileptic Action Of Marijuana-Active Substances BY JEAN P. DAVIS, M.D., and H.H. RAMSEY, M.D. [2]

All of them had severe symptomatic grand ma1 epilepsy with mental retardation; three had cerebral palsy in addition. Electroencephalographic tracings were grossly abnormal in the entire group; three had focal seizure activity. Their attacks had been inadequately controlled on 0.13 gm. Of phenobarbital daily, combined with 0.3 gm. of Dilantin per day in two of the patients, and in a third, with 0.2 gm. Of Mesantoin daily. Two isomeric 3 (1,2-dimethyl heptyl) homologs of THC were tested, Numbers 122 and 125A, with ataxia potencies fifty and eight times, respectively, that of natural marijuana principles. Number 122 was given to two patients for three weeks and to three patients for seven weeks. Three responded at least as well as to previous therapy; the fourth became almost completely and the fifth entirely seizure free. One patient, transferred to 125A after three weeks, had prompt exacerbation of seizures during the ensuing four weeks, despite dosages up to 4 mg. daily. The second patient transferred to 125A was adequately controlled on this dosage, except for a brief period of paranoid behavior three and a half weeks later; similar episodes had occurred prior to cannabinol therapy. Other psychic disturbances or toxic reactions were not manifested during the periods of treatment. Blood counts were normal.

1.2 – MARJUANA LEAF PLAYS EPILEPSY CURE ROLE
The below newspaper article, taken from the “Salt Lake City telegram [May 20, 1947], was located via the National Archives (College Park, MD). It belonged to and was integrated into the files of Harry Anslinger’s old Bureau of Narcotics, today known as the D.E.A. We believe that it was the first that Anslinger knew about the study, and thus too late to CENSOR or put a stop to it.

Drug principles isolated from leaves of marijuana, an innocent-looking plant that grows wild in different parts of the world, are playing an important role in research on a cure for epilepsy.

This is the same marijuana which so many people fear as a habit-forming drug and which is noted for the opium-like dreams it produces in those who partake of it.

The drugs being used are synthetic substances related to cannabinol, which is contained in marijuana, but does not produce the same effects. Dr. Jean P. Davis, faculty researcher at the University of Utah medical college, has done considerable research with the drugs in treatment of minor and convulsive epilepsy.

She reports that the drugs have been found effective about 50% of the time. Future for epileptics appears “very bright,” she said, “because of not only one new drug, but a whole field of new compounds to combat epileptic seizures.”

Helps Minor Seizures One of these new drugs, trimethadione, is most effective in petit mal epilepsy, minor seizures common in younger patients. Another, paramethadione, a sort of second cousin to the first, is useful in such spells.

Epilepsy comes in four degrees: grand mal, or pykno-epilepsy, with brief staring spells; psycho-motor, accompanied by amnesia and unusual behavior, and Jacksonian, identified by retention of consciousness with progressive twitching and numbness of one leg or arm.

Mr. Davis is in charge of a section of the psychiatric clinic at Salt Lake General hospital, where she does some clinical work. She also instructs advanced courses in the departments of pharmacology and physiology at the university.

Began in 1929 According to Dr. Davis, actual valuable research with modern methods of fighting epilepsy came into their own in 1929 with the invention of the electro-encephalograph, an instrument for recording brain activity.

And the latest of the compounds used in treatment of the affliction was developed in 1948. Meanwhile, research is advancing at a rapid pace, Dr. Davis said.

She studied for three years under Dr. William Lennox, one of the top U.S. experts on epilepsy. She received her doctor of medicine degree at Yale university in 1943.

Most of her clinical work has been confined to children, with whom she “likes to work.”
Here note the wording:
“. . . Have been found effective about 50% of the time. “

“ . . . Drug principles isolated from leaves of marijuana . . . being used are synthetic substances related to cannabinol, which is contained in marijuana, but does not produce the same effects. “
With respect to the above — note that a Medical Cannabis like “synthetic substance” is being referred to.

5 thoughts on “Medical Cannabis Halts life-Threatening Fit’s and Seizures in Children! Self Help (3).”