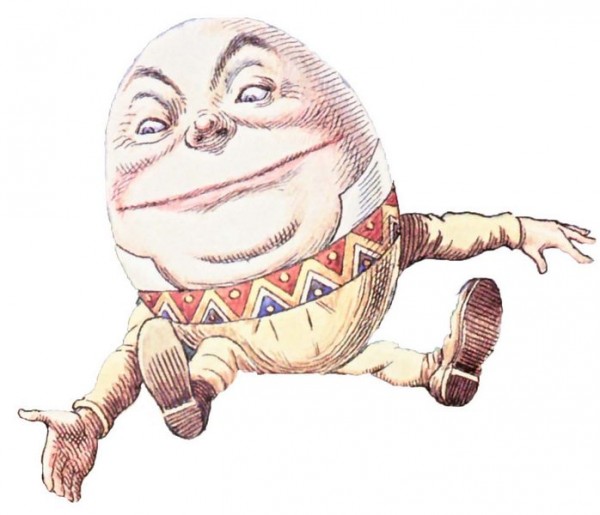 Have you considered an egg?

I poached the following passage from Lewis Carroll’s Through the Looking-Glass (1872), where Humpty discusses semantics and pragmatics with Alice.

Humpty Dumpty smiled contemptuously. “Of course you don’t – till I tell you. I meant ‘there’s a nice knock-down argument for you!'”

“When I use a word,” Humpty Dumpty said, in rather a scornful tone, “it means just what I choose it to mean – neither more nor less.”

“The question is,” said Alice, “whether you can make words mean so many different things.”

“The question is,” said Humpty Dumpty, “which is to be master – that’s all.”

What an egg-otist! Whosoever exalteth himself shall be abased. It’s no wonder Humpty Dumpty had a great fall.

A long time ago I was a philosophy student at Otago University. And one exam time I was looking at some past exam papers and came across the following exam question: What is the meaning of a word?

It’s a simple question with a simple answer. The meaning of a word is determined by the conventions that govern its use. This is no mere platitude. It’s philosophical orthodoxy and has been since David Lewis – ranked by his peers as the third most important philosopher of the twentieth century – published Convention: A Philosophical Study (1969). Platitude. Orthodoxy. Truth.

The meaning of a word is determined by the conventions that govern its use.

Alice is right. ‘Glory’ doesn’t mean ‘a nice knock-down argument’. You can’t make words mean so many different things. You can’t make ‘glory’ mean ‘a nice knock-down argument’ on your own, any more than you can determine the next government by casting a single vote. What’s more, one of the conventions that governs the use of the term ‘glory’ is the convention of correcting people when they use the word to mean something else. Our linguistic conventions have a built-in inertia that safeguards our very ability to communicate.

Humpty Dumpty’s semantics was scrambled a long time before he met the same fate. 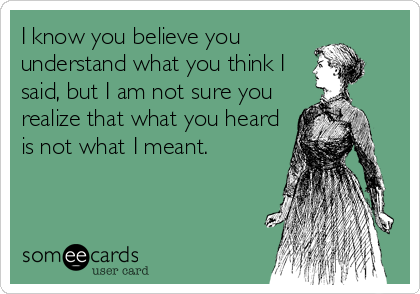 Sense of Life Objectivists (SOLO) is the world’s foremost forum for disciples of Ayn Rand. Go there and check out the banner at the top-right of every page. Every few page loads it advises

Say what you mean, and mean what you say

It’s good advice. But, SOLO being the hive of hypocrisy that it is, well, you’d hardly expect its delusional denizens to take it, would you? No, you wouldn’t and they don’t.

Recently, I’ve been following (one side of) a conversation on SOLO. An Objectivist said this.

What did you understand I meant by “human (i.e. existential) survival”? Let me tell you, because I think you misinterpreted me. I meant what Ayn Rand meant by it, namely, living in accordance with man’s identity as having the potential to be a heroic being

This has the more general form.

To which I respond, if you meant ‘Y’, why didn’t you find the word or words which actually mean what you meant, and use those instead? To enter into a philosophical discussion is to commit to upholding certain standards of rational debate. It is inexcusable to say ‘X’ when you mean ‘Y’. I know, I’ve done it myself. I’ve said ‘X’ when I meant ‘Y’. And I’ve apologised. There is simply no excuse for not saying what you mean, let alone any entitlement to use words any which way. Why should other participants in the debate have to take time out to establish the meaning of your every utterance? It’s an imposition.

There’s another problem. Words have meanings. Their meanings are determined by the conventions that govern their use. Their meanings are not determined by you on an ad lib basis as you see fit on any given occasion. Consider the case of someone who habitually says ‘X’ but means something else. (In other words, consider an Objectivist.) The Objectivist tells us he actually meant ‘Y’. But what does he mean by ‘Y’? Perhaps by ‘Y’ he means ‘Z’?

This can go two ways. One is an infinite regress of stipulative definitions. The other is a regress that stops when the Objectivist tells you that what *he* actually means is the same as what the *words* he uses actually mean. But if the Objectivist is demonstrably capable of using words to mean what the words mean, as he is in the latter case, he is without excuse for not using words to mean what they actually mean in the first place.

We use words to talk about reality. The constant redefinition of ordinary words that goes on in Objectivist circles has the inevitable consequence that the relations of reference that obtain between words and the world come unstuck.