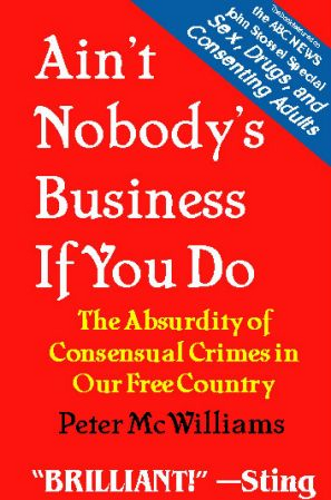 Everybody—including me—should read Ain’t Nobody’s Business If You Do: The Absurdity of Consensual Crimes in Our Free Country by Peter McWilliams. It’s a libertarian classic.

During his life, he authored nearly 40 books, including The TM Book in 1975 with Denise Denniston, which was at the top of the New York Times bestseller list for three weeks.

McWilliams was diagnosed with non-Hodgkin’s lymphoma in 1996. He was arrested and charged with growing marijuana in 1997. He was released from custody on $250,000 bail and with the “condition that he not use marijuana.”

McWilliams died on June 14, 2000 in his Los Angeles home, of AIDS-related non-Hodgkin’s lymphoma. At the time he was awaiting sentencing for his conviction of conspiring to “possess, manufacture and sell marijuana.”

Cannabis activist Richard Cowan and many critics of the drug policies in the United States have described his death as murder by the U. S. government, insofar as they denied him the use of the medical marijuana which might have prevented his death. William F. Buckley stated that McWilliams was vomiting and in pain when he died.

Ain’t nobody’s business if you do … but if what you do is deny people life-saving medicine, it is everybody’s business. You should be locked up and released only when you no longer pose a threat to other people’s well-being. Legalise medical cannabis. Anything less is a non-consensual crime.

(Of particular interest to Christian libertarians are the following sections of a chapter in Part IV.

Jesus of Nazareth and Consensual Crime
Jesus on Sex and Marriage
Jesus and the Separation of Church and State
His Master’s Voice?

Written from an honest atheist perspective, they make for challenging and compelling reading.)

One thought on “Ain’t Nobody’s Business If You Do”