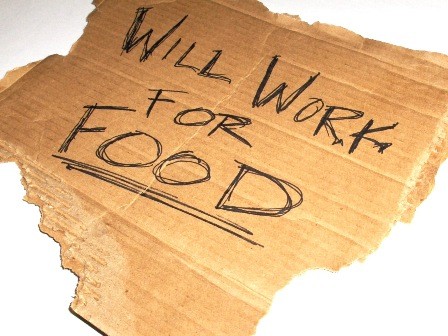 In the USSR work is a duty and a matter of honor for every able-bodied citizen, in accordance with the principle: “He who does not work, neither shall he eat.”

It disturbs me that according to Lenin, “He who does not work shall not eat” is a necessary principle under socialism (the preliminary phase of the evolution towards communist society, according to Marx).

It disturbs me because under New Zealand socialism the exact opposite is true, “He who does not work shall eat”. Will the real socialism please stand up?

It disturbs me more that this aphorism is taken directly from Paul’s Second Epistle to the Thessalonians.

For even when we were with you, this we commanded you, that if any would not work, neither should he eat. (KJV)

What does the Bible say about communism?

Now the full number of those who believed were of one heart and soul, and no one said that any of the things that belonged to him was his own, but they had everything in common. And with great power the apostles were giving their testimony to the resurrection of the Lord Jesus, and great grace was upon them all. There was not a needy person among them, for as many as were owners of lands or houses sold them and brought the proceeds of what was sold and laid it at the apostles’ feet, and it was distributed to each as any had need. Thus Joseph, who was also called by the apostles Barnabas (which means son of encouragement), a Levite, a native of Cyprus, sold a field that belonged to him and brought the money and laid it at the apostles’ feet.

But a man named Ananias, with his wife Sapphira, sold a piece of property, and with his wife’s knowledge he kept back for himself some of the proceeds and brought only a part of it and laid it at the apostles’ feet. But Peter said, “Ananias, why has Satan filled your heart to lie to the Holy Spirit and to keep back for yourself part of the proceeds of the land? While it remained unsold, did it not remain your own? And after it was sold, was it not at your disposal? Why is it that you have contrived this deed in your heart? You have not lied to man but to God.” When Ananias heard these words, he fell down and breathed his last. And great fear came upon all who heard of it. The young men rose and wrapped him up and carried him out and buried him.

After an interval of about three hours his wife came in, not knowing what had happened. And Peter said to her, “Tell me whether you[a] sold the land for so much.” And she said, “Yes, for so much.” But Peter said to her, “How is it that you have agreed together to test the Spirit of the Lord? Behold, the feet of those who have buried your husband are at the door, and they will carry you out.” Immediately she fell down at his feet and breathed her last. When the young men came in they found her dead, and they carried her out and buried her beside her husband. And great fear came upon the whole church and upon all who heard of these things. (ESV)

Now I’m not suggesting that this passage from the Acts of the Apostles endorses communism as we know it. But it certainly describes communism of a sort. There’s no escaping the fact that the first Christians were commies!

I’m also not suggesting that comrades Ananias and Sapphira were struck dead for being insufficiently communistic. They died because they lied.

Now the full number of those who believed were of one heart and soul, and no one said that any of the things that belonged to him was his own, but they had everything in common. (ESV)

Luke says that “no one said that any of the things that belonged to him was his own” so it might almost seem that the Apostles were maintaining a contradiction. Of course, any of the things that belong to you are yours! But I think that two conventions are being alluded to in this passage. The prevailing convention in society at large, that of private property, and the convention in force amongst the Apostles, that of communal property.

3 thoughts on “Give me Communism, or give me Death!”