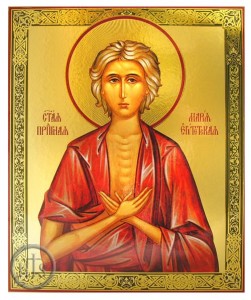 This past Sunday in the Orthodox Church is not Palm Sunday (which is next week), but the Sunday of Mary of Egypt.  Mary’s life story is fascinating.  At the age of 12, she ran away to Alexandria and proceeded to live the life of a sex addict, not even accepting money from the men she slept with so as to sleep with as many men as possible.

Around 475AD, she learned of a pilgrimage to Jerusalem for the feast of the Holy Cross, and the thought of all those men in one place became all too enticing.  Paying for her passage in sexual favours, she sailed to Jerusalem, continued her dissolute behaviour while there.  However, on the day of the feast, she was miraculously barred entry to the Church of the Resurrection.  After her third attempt to enter, she saw an icon of the Theotokos on the wall and began seeking her intercession to enter and forgiveness from God of her sins.  It was only after this that she was able to enter, venerate the Cross, and receive the Eucharist.

Leaving her former life behind, Mary took three loaves of bread and wandered out into the Jordanian desert away from other human beings and all external temptation.  By her own account, it took her seventeen years of struggle before she was able to overcome her lusts and desires, after which she continued to remain in the desert another thirty years.  When she was finally discovered – by Zosima of Palestine not long before her repose – she had reached levels of holiness such that she had the spiritual gift of foreknowledge and was able to levitate and walk on water.  She had gone from being the basest of whores, to a virginal and holy being – an example of what great humility, prayer and struggle can accomplish by God’s grace. 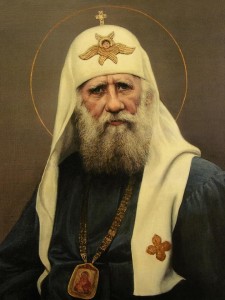 Tikhon, born Vasily Ivanovich Bellavin, is remembered as a great Bishop and martyr of the Church.  Consecrated at a young age, he was quickly appointed Archbishop of Alaska, and by extension, all North America.  Becoming an American citizen, he oversaw a period of great growth in the Orthodox Church in the United States, and translated many of the Church’s services into English for the first time.  He also approved what is now known as the Liturgy of Saint Tikhon, an Orthodox adaption of the Anglican Mass used to this day in many Western Rite Orthodox churches and former Anglican parishes.

Recalled to Russia in 1907, he continued to impress as Archbishop of Yaroslav and of Vilnius, such that, following the abdication of the Czar, the Russian Church revived the position of Patriarch of Moscow (which Peter the Great had abolished) and elected Tikhon to serve.  He wasted no time in being a vocal critic of the new Bolshevik regime, for which he was placed under arrest and officially “deposed” by the Soviets (though this is not recognised by the Church).  He is widely regarded to have been poisoned by them as the cause of his death in 1925.