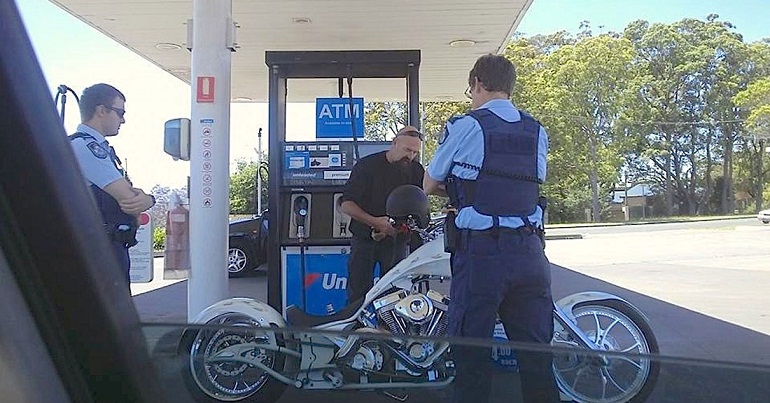 Harley Davidson rider James Evans, who has been stopped a startling 21 times since buying his fatboy motorcycle in 2012, finally filmed his latest incident.

Queensland Police Media have responded to Jamie’s video saying riders and the public have “nothing to fear” from the increased police presence. Jamie is a member of the Misfits Social Motorcycle Club and wears a “Misfits” vest when he rides… “I’ve been advised by the police on many occasions to take the vest off, but I will always wear my vest. I’m proud of it,” he says.
…However, the harassment has now got to the stage where he says he can’t take his nine-year-old son for a ride. “How do you explain to a nine-year-old that police aren’t bad but I ride a bike so they see me as being bad. He’d lose any respect he has for the police,” he says. Despite the grilling by several police, Jamie filmed the whole incident and managed to keep his sense of humor…. Read more >here< 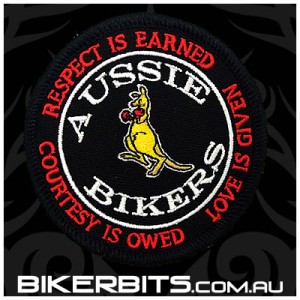 Reports from Australia are becoming more grim every day.
It is fast becoming a brutal Police state!
Under the pretense of breaking up Organised crime, Australian legislators have empowered the Police to go on a rampage.
Not only are they going to extreme lengths with regards to 1%er Motorcycle clubs, but they are perpetrating extreme prejudice towards All bikers, People with Tattoos, etc… and shutting down vibrant Entertainment and business districts. 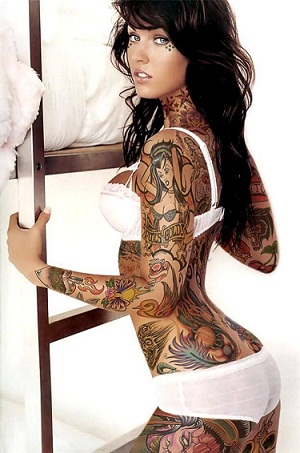 Read this >>> The Australian Government Says If You Are Tattooed, You Are a Criminal.

And this>>>> Would the last person in Sydney please turn the lights out?

“Ruled by a succession of incompetent governments, everything in Sydney is now illegal- including fun.

“Love it or hate it, the verdict from certain quarters is in: Kings Cross is dead.
Gone are the bohemians, gone are the Yellow House artists, gone is the fringe, underground culture that, to some, gave the area its soul.” 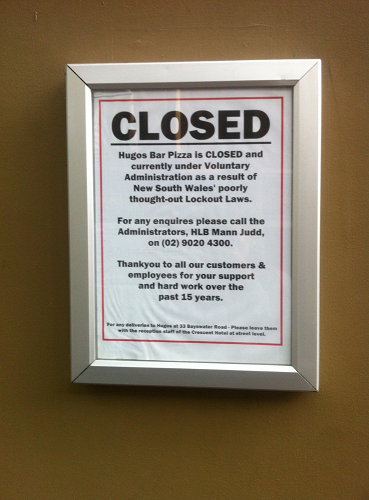 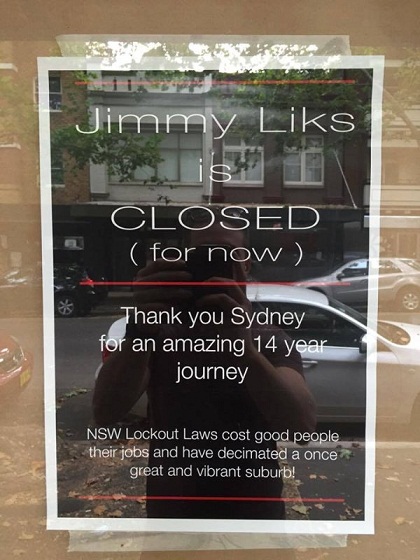 With regards to the persecution of Bikers, Australian Draconianism and Thuggery has spawned opposition groups like Riders Against Discrimination

We have today received a message along with some disturbing pictures from a social rider in Queensland.
We cannot share the pictures or mention the persons name on here as this may be going to court and we respect the request made by the victim of anonymity

At approx 7pm on Friday night this rider was pulled over for a ‘Random’ breath test and following this he was advised that there was to be a search of his bike and himself which he consented to. Nothing was found and so the male police officer asked him to remove his clothes at the side of the road for a strip search, he did not consent to this, aside from this not being a requirement for an RBT anyway last we heard, he was not comfortable as there was also a female officer present.

He then thought he should film anything further that might occur and when he advised the officer he was going to video any further interactions the officer attempted to take his phone away which he resisted and we have seen pictures of the injuries to his face and his arms which occurred during the struggle.

Once again if you think only club members are affected think again this was a social rider – not riding a Harley and wearing his vest with a few patches that were not club patches – EVERYONE is being targeted and we hope that this account reaches the people who are reviewing the VLAD laws as this is another account of the unacceptable nature of the laws and legislations which need to be abolished.

PLEASE SHARE and especially to the wider public who do not ride and need to understand why we are so passionate about the removal of the laws and we ask this question – how many car drivers were stopped at that same RBT last night and how many of them were subjected to further searches and asked to strip off at the side of the road?

DISCRIMINATION at its worst! 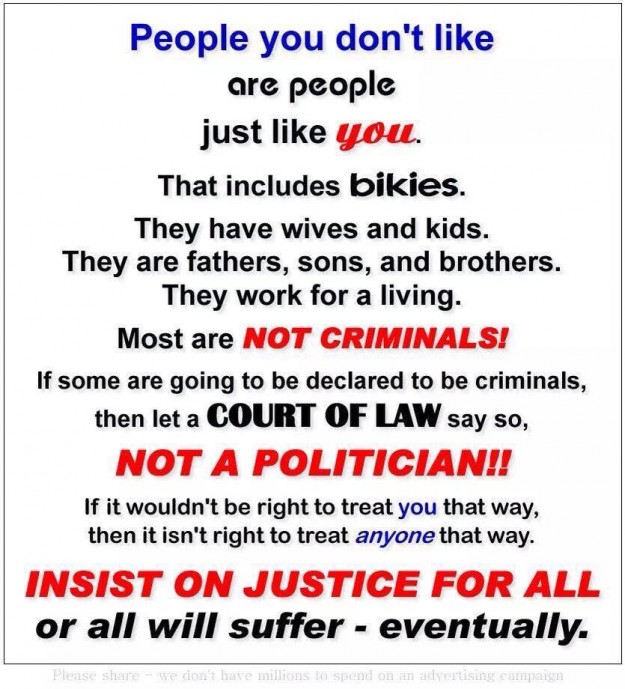 Now What is happening in Australia ought to be of concern to Every Liberty and Justice loving Human being, esp to us who ride to live… just across the ditch.
I read recently that ” The Hells Angels in Nelson” and that “the Police say they ‘wont tolerate’ them”.

I ask “Should New Zealand Bikers be worried about Auzzy Style Nazi Laws getting passed here ?”

The expansion of organised criminal gangs in Nelson will be not be tolerated, police say.

The comments follow reports that the Hells Angels has overthrown the longstanding Lost Breed motorcycle gang in Nelson.

Sources said the Lost Breed disbanded in late December after at least one senior member defected to the Hells Angels.

It is understood the Hells Angels has also taken over the Lost Breed gang pad in Fuji Court, Stoke.

Tasman police district commander Superintendent Karyn Malthus said police were working to “confirm and understand” what has happened.
However, she said the expansion of any gang in Nelson Bays “won’t be tolerated” by police.

“I think it’s intolerable to have gangs in our society full stop. We have a concerted focus against it. Whether it is the Lost Breed or the Hells Angels, they will get the same focus from police,” Malthus said.

“It is something that we will focus our energies on in combating organised crime – absolutely.”

Malthus declined to comment on what she described as “gossip and innuendo” around the Hells Angels’ expansion in Nelson.

She said gangs generally “only exist for criminal activity and we have to accept that, yes, methamphetamine plays a major part in their day-to-day business”.

The Hells Angels has been linked to the methamphetamine trade in New Zealand.

Detective Sergeant Chris Roberts, officer in charge of the Tasman Organised Crime Unit, said police will act on any information and intelligence they get regarding gang criminal offending in the region.

“It’s business as usual for us. If there’s any offending we can look at, we will. Certainly we don’t want criminal gangs expanding in the district. If they’re there to commit offences, they’ll be policed accordingly.”

He said there had been no suggestion of “inter-gang friction” in the region.

“If that came to the fore we’d be out there looking to deal to it,” Roberts said. “That’s what we’re here for – to protect the public and to continue preventing crime.”

Read more >here< *************************** Now as a Libertarian and a NZ biker I ask What the flock are the Nelson police going to do about all this? They will probably use their old tactics, which include undercover operations... and salivate about *Big Raids and Mass Busts*.... you know.... the Drug war Bullshit ... same shit that made Al Capone Filthy Rich and super dangerous... Yet I am concerned that they may also Lobby parliament* or council to pass Auzzy style Nazi laws against Biker Clubs. 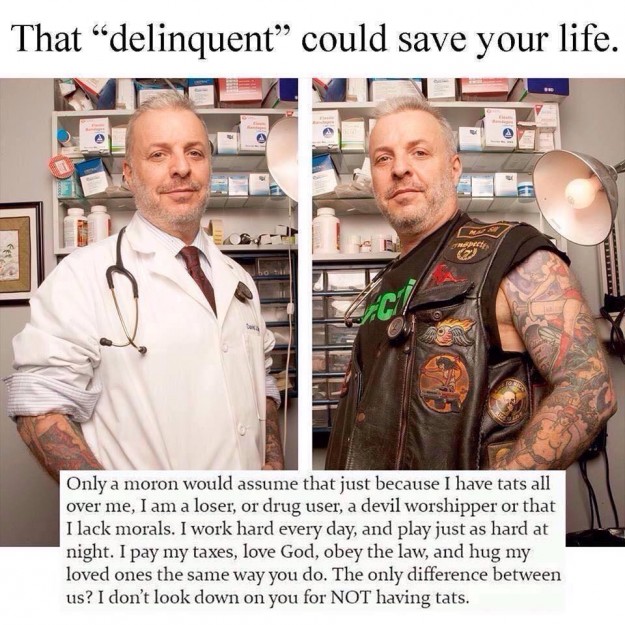 Now I have nothing against the Police arresting violent dangerous criminals…. nothing against the Police breaking up organised crime syndicates… yet the way parliaments like Australia function is that they use shitty excuses like Gang violence to pass Evil laws which end up violating the rights and liberties of Everyone… and give the Police evil powers to Fuck over peaceful people who are not guilty of any wrong doing…. Like most bikers…. and that is what is happening in Australia. *Right now*… and what most of the arsehole sheeple of New Zealand (who dont ride) would love to see happen here.

And on this subject of ‘organised crime’…. instead of passing such nasty anti-freedom laws… which actually make more people hate the Police, parliament should end the war on drugs… That would put an end to a massive proportion of the violence that is associated with organised crime and bikers.
A reform like that would actually *improve* relations between the people and the police.
And Biker clubs that don’t get involved in serious organized crime could be left in peace… as they should be.
There are also principles of justice which ought to protect the freedom of association of everyone… just because a some gang members may commit certain crimes, this is not justification for holding *other members* of that gang responsible for the crimes of their associates.

*Yet many in the police… the courts… politicians… and most of the sheeple despise such principles and safeguards for individual liberty and justice because it makes their job harder to do…. they prefer the easy way… the un-principled bigoted way… that panders to their hatred… and dont give a shit about principles of justice…. they simply want the power to fuck over people and groups they hate or fear.

And in the process Liberty and thousands of innocent people get stomped on by the system… but hey that’s just business as usual in shitty Socialist democracies that fill their jails with peaceful people.
Tim Wikiriwhi
Christian Libertarian.
New Zealand Biker. 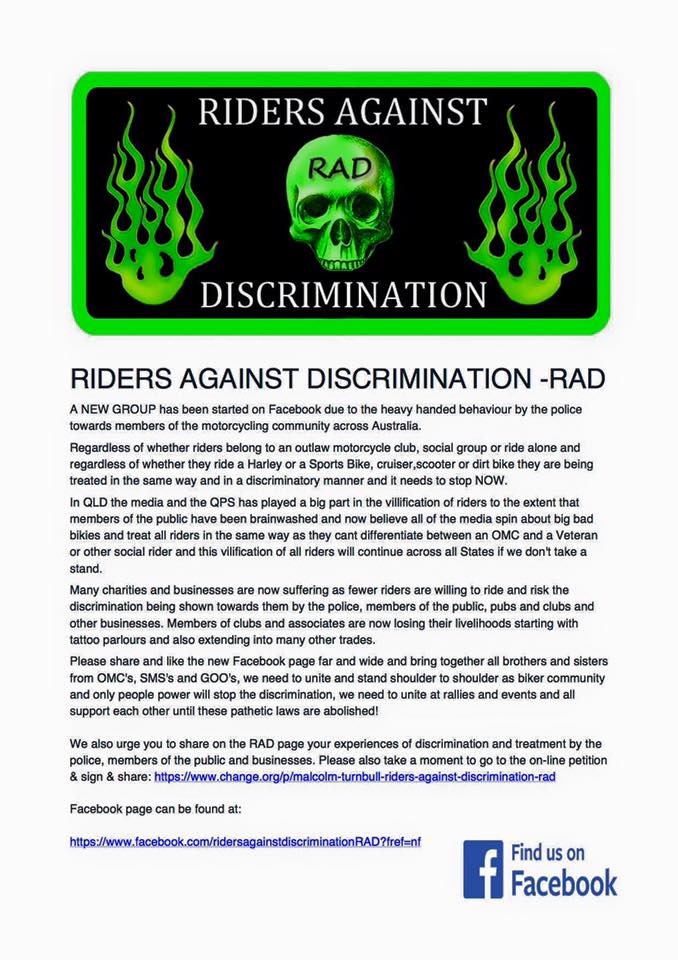 EXCLUSIVE: 7 News has obtained exclusive pictures of a violent arrest on the Gold Coast.#7News