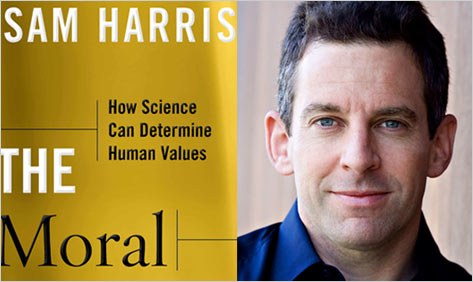 Watch the video (above)…

Well that was predictably shallow….

The Bible says that all human beings have an innate knowledge of ‘Good and Evil’… ie an innate sense of right and wrong… ie a sense of morality… and this atheist is validating this Biblical claim.
Yet everything he has to say about this innate moral knowledge is just his own rationalisation that he is forced to extrapolate from his atheist premises… yet to achieve his end he must deceive the gullible that *all things of value* can be ‘conjured up’… or ‘synthesized from’… (to use ‘science-y terms’ more acceptable to his audience)… from valueless meaningless materials… that is what he claims he can do…

He *must frame his argument in naturalistic terms… not because they are a valid basis for morals and values… but because they are the only materials he is permitted to use because of his presuppositions about Godlessness.
He cannot speak of ‘ultimate higher truths. but must reduce morality to pragmatic ‘here and now’ goals.
He automatically assumes *well being* is something morally good, and that *causing pain* is morally wrong… and give no foundation for this than our own abhorrence at gratuitous cruelty (he plays upon our feelings).

He peddles Ayn Rand’s ‘pragmatism’ about ‘human flourishing’ as being ‘Ideal’… and assumes that whatever tends towards ‘human flourishing’ … progressing along his imaginary ‘continuum away from poverty and death’… must be ‘moral’…. yet all this cherry picking is no more valid than Lenin’s claims that the Party state is the highest authority in the Universe and that pragmatically speaking whatever tends to the benefit of the Party States domination of the world… those actions are deemed to be ‘moral’ (which includes justification for pogroms, assignations, terrorism, etc )… and of course the Communist too appeals to pragmatism, as justifiable because it aims at the liberation of humanity … ie it’s ideal is ‘human flourishing’ too!
Who would argue against such high ideals???

He thinks that by making out that some ‘religion’ is patently abhorrent
(the example of the Father who chooses to kill his daughter because she was raped) that this is evidence that religion is *immoral*… yet in truth he simply validates the scriptures yet again… that false religion is evil.

As for talking about ‘Pandora’s box’ …technology… and about the dire need for ethics to keep it from Evil… he fails yet again, as Einstein himself said for this very reason that *moral teachers* like Jesus Christ are more important than physicists…

He Dishonestly omits most of his deepest opinions and evaluations.
What he keeps hidden is the truth!
He *really* believes humanity is nothing more than a purposeless accident, and that our lives have zero ultimate value… and that the universe will end in Death… and all Good will and evil intent will die along with it and prove to be equally pointless distinctions.

He doesn’t confess that he does not even believe we are freewill moral agents!
He actually believes we are slaves of materialist determinism chained to physical causation leading right back to the first milliseconds of the Big bang!

He utterly fails to fulfill his original claim that he would demonstrate that Science has something to say about morality.

P.S Ted Bundy was an atheist when he did his crimes and said that his atheism was a primary factor in his actions as he chose to ‘liberate himself’ by abandon all morality.
Somehow he grew a conscience and changed his views…
He would convert to Christianity before he was executed.

Read: HOW CAN A GOOD GOD EXIST WHEN THERE IS SO MUCH EVIL IN THE WORLD? (PART1) ATHEIST NIHILISM.

THE DARKNESS. THEN THE DAWN.