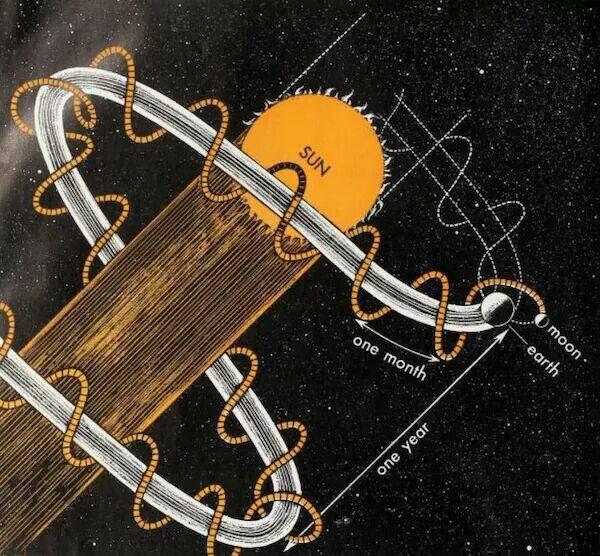 I like to chillax and contemplate this mind blowing relationship and the appreciation that everything is in motion… Craft IPA in hand.

This is obviously an artistic child-like interpretation… very simplistic yet one step above the usual static Sun conception.
Not to scale… and only contends with the Sun, Earth, and Moon… so no ‘orbital plane’ (which itself is only something relative to a static Sun… and which ought to inspire awe given the whole conglomerate is in serious motion) .

All the bodies themselves rotate.

These simplified types of visual still have value, helping us expand our notions and make them more sophisticated, and yet we would be very disturbed should such a visualisation be made to scale… with the correct motions for example the Sun does not travel in a straight line but itself follows an orbital curve.

Yet I am not sure anything better than this abstract conception could be presented in this format?


Helical pitch greater than the diameter.

The distance between the Sun and the Earth is way off,(proportional to the diameter of the Sun), the Earth and Moon are at least 10x too big by the same measure, and the ‘pitch of ‘the helical Screw’ @ 800,000/hour ( year length) ought to be about 7x the Orbital circumference length of the Earth about the Sun, which would barely be recognisable as comparative to this artistic impression… placing our helical path at an extreme acute angle comparative to this… esp so if our orbit is not in fact perpendicular to the suns motion … as this diagram suggests… which is also probably an inaccurate simplification.

If our orbit is skewed to the Suns motion, then for an outside observer moving in parallel to the Sun it would appear that at times we would be accelerating slightly past the moving Sun, and then dropping behind it…
Trying to visualise the actual motions is mind-bending… esp how far out into space the gravitational effects of the Sun extends… dragging even Jupiter along for the ride… at breakneck speed!

Anyone see fault in my musings?