Don Brash is in the news again following today’s publication of his autobiography Incredible Luck. True to form, the NZ Herald focuses on the most salacious bits of the book.

In a warts-and-all chapter covering his personal life, Dr Brash tackles head-on his reputation for being a womaniser. But beyond arguing that men have an “extremely powerful biological urge to have sex”, he struggles to explain why he had extra-marital affairs which ultimately took a huge toll on his personal life and plunged him into a deep trough of depression.

Dr Brash writes that adultery was certainly not part of his Christian upbringing, but argues “that the great majority of human males are programmed to find women sexually attractive”.

He realised, of course, that some men were gay. “I have never suspected, even for a single moment, that I might be gay.”

I take it as read(-blooded) that Brash is right. Men do, indeed, have an extremely powerful biological urge to have sex and the great majority of human males are programmed to find women sexually attractive. The question is, what best explains this primal fact? Creationism or evolutionism? 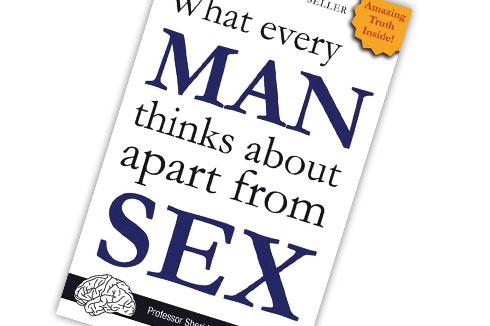 Evolutionism offers a compelling explanation of the male libido.

We are survival machines—robot vehicles blindly programmed to preserve the selfish molecules known as genes. This is a truth which still fills me with astonishment.

So says Richard Dawkins in his classic The Selfish Gene. And the experience of being male surely bears out the claim. Over the years, my own libido has got me into heaps of trouble, including relationships with women. I even reproduced! But I survived. 🙂 (And I’m older and wiser now, of course.)

It’s not that there aren’t problems with the evolutionist account. Of course, there are, and there’s one big problem in particular, viz., the origin of sex itself. The first forms of life (according to the theory of evolution) were single-celled organisms or simple multi-celled organisms that reproduced by a process of asexual reproduction called budding. It’s a mystery when, why and how the first two such organisms got together and said, “Fuck budding, let’s be fuck buddies.” I expect my evolutionist readers will have some fanciful accounts to share in the comments section below.

So, what’s the best creationist explanation of the male libido? Well, one explanation springs immediately to mind. In Genesis 1, God created mankind in his own image

God blessed them and said to them, “Be fruitful and increase in number; fill the earth and subdue it. … (NIV)

I’ve been meaning to post this for a while. Since 17 November 2010, to be exact. (You think I have a memory like an elephant? You should see my database.)

I dedicate this to a frequently furtive fellow freedom-fighter and friend. Why frequently furtive? Because, when you’re taking on the faceless forces of the grey ones, shining a light, Christ-like, in dark places where scuttling Statists sleeplessly scheme to grind our God-given rights into the barren dirt of despotism, anonymity is never a bad idea. (My friend is also no stranger to alliteration.)

This is one of my favourite tracks by legendary Canadian deathcore band Despised Icon. Did I already mention that Despised Icon is the best thing since Slayer? I did.

I expect my friend won’t appreciate the music much, although the anguish in the vocals matches the often anguished tone of his blog posts. But it is the accompanying video which reminds me of him. The man in the video is being pursued. Pursued by whom or by what? By person or persons, entity or entities, unknown. But the IRD is a pretty good guess. Although I suppose it could be his own personal demons. Maybe even the Big G? Well, how does it all end? In victory or submission? Or both? With an enigmatic smile.

Despised Icon is the best thing since Slayer. ‘Nuff said.