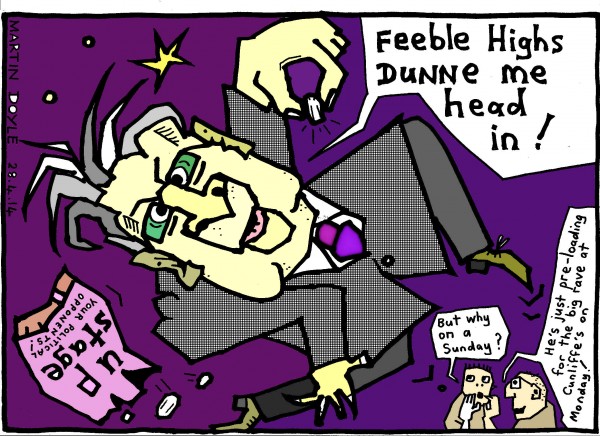 A very good commentary appeared in this weeks Sunday Star Times which articulates many of my own opinions regarding Peter Dunne’s/ The National Party collapse and back pedal regarding the PSA and banning all Synthetic Cannabis products.

This was Election year shystery on an almost unprecedented scale in recent memory… to the degree that it absolutely caught me off guard… so resolute were all voices, on all sides that the PSA was working and that Banning things was not the solution.
I heard these words directly from horses in both Major party Stables only a few weeks ago at the Hamilton contingent of the Anti-legal high rallies.
I should not have been so naive… Of course absolutely nothing is safe… nothing is absolutely ‘not for sale’ on election year, and the sensationalist socialist conservative media was having a field day with this hot potato… the likes of TV3’s John Campbell was relishing playing ‘Moral Cleric’ and inciting a Jihad on Legal highs with the most un-objective and grubby media sensationalism.

Labour’s barrel scraping leader David Cunliffe spotting an opportunity to score political points against National shamelessly and without regard for Justice or the Social costs,… without a scrap of objectivity or scientific vindication decided it was in Labours political best interest to reneg on their support for Peter Dunnes PSA… and I am sure many of Labours and Nationals own MPs were just as surprised as me at the swiftness of this reversal and re-posturing…. and greatly embarrassed by it as they had only weeks ago argued that the PSA was working and that ‘Banning stuff’ doesn’t work!
(Yet I dont expect their embarrassment lasted long, and has been overcome by the political gains their party made via this shysterism)

I also know that for none of them… esp not Peter Dunne… was the underlying ideas of establishing Legal alternatives to alcohol the real ambition of the PSA.
It was always primarily a tool whereby Parliament could Ban substances produced in synthetic Drug labs as they appeared on the shelves, and Dunne and co were always actively encouraging the State health system, etc to file negative and highly subjective reports about Legal highs to be used by parliament as vindications for manufacturing new legislative prohibitions.
Add to this that PM John Key has vetoed the use of animals for testing the safety of legal highs… while still allowing it on other products… just goes to show how shystery and duplicitous this whole Mickey Mouse PSA ‘Due precess’ really is.

The world was very interested in the Psychoactive Substances Act, and was hailing it as an enlightened alternative to the failing and oppressive prohibitions and the war on drugs…. expecting New Zealand to be one of the first western nations to have clinically tested and relatively safe legal recreational alternatives to alcohol.
Well Dunne failed the drug test! and what is most sad about it is that not only will this cause suffering to the industry, jobs, etc, and suffering to Recreational drug users whom must now return to the illicit black market… the ripples with travel about the globe because the truth about how this attempt at establishing a legitimate/ Legal high market was torpedoed… by posturing spineless Politicians who put their own self-interest on an election year…ahead of justice and Social well being …will be buried, and instead the notion will be that ‘Synthetic cannabis was found to cause great social chaos in New Zealand’…. therefore attempts in other nations by reformers to mitigate the War on drugs and to set up a regulatory system which allows relatively safe alternatives to alcohol… like Synthetic cannabis will meet a strengthened Anti-drug resistance armed with the False Data from this outward looking New Zealand legislative failure.

I also think that this reversal has set back any hope of the legalisation of cannabis because these moves have Revitalised the Prohibitionists, whom were beginning to falter…. and so I shake my head and sigh that so many Activists who seek an end to the War on cannabis, had so little foresight, so little moral integrity as to buy into all the Anti-legal high hype, and jump onto the Prohibitionist wagon and join the throng calling to Ban synthetic cannabis.
Many did so wilfully refusing to apply their first hand knowledge about how prohibitions are fuelled by irrational exaggerations, un-objectivity, lies, and ignorant fears… ie “Reefer Madness”, etc.
They did so in pure hypocrisy, out of an unprincipled and devious belief that some how the more they incited terror against synthetic cannabis… and hyped up just how evil society imagined these products were… that somehow this would make cannabis appear much more ‘acceptable’.
I think they have mis-calculated badly…. even though in New Zealand we can expect the entire future conversation of the Cannabis reform movement to have shifted away from Cannabis use being a rightful liberty and being safer than alcohol, to now a call for an end to cannabis prohibition by primarily using this newly manufactured mania against synthetics… as a lever… as a threat…even though the perceived Dangers synthetics poses to the public is largely founded upon lies.
For me it is shameful to try and capitalise off the oppression of another unpopular minority for the sake of your own advantage.
I refuse to be party to it.

These events clearly demonstrate just how exposed life and liberty is to the Machiavellian whiles of Party Politics in New Zealand because we have no constitutional protection against power lusting Demagogues who put their own interests ahead of Rights, Liberties, Justice, and Social well-being.
We are utterly expose to the winds of Media manufactured terror.
The survival of PSA was a house of cards…. relying solely on the maintenance of the cross-party consensus as to its pragmatic value and Users and distributors were fed to the hounds as soon as one party blinked.

The ultimate travesty will be that inspite of Cunliffe/ Key systerism Re The PSA Labour will fail to get elected and so the rights and well being of the Users and distributors will have been sacrificed for nought!

And the collapse demonstrated just how full of unscrupulous Bastards our parliament is peopled with.
If we had a just Libertarian Constitution, virtually none of them could function.
All their Legal mumbo jumbo would be binned.
They would be like Evil witches with their wands taken away!

Ironically One party did maintain themselves and refused to back the new changes (passed though the house tonight).
The Greens.
They refused to be swayed, saying they believed the perceived dangers driving the prohibitions were exaggerations and that in reality the PSA had been working!
Is it a Blue Moon?
I find myself Saluting the Greens!
Well done! 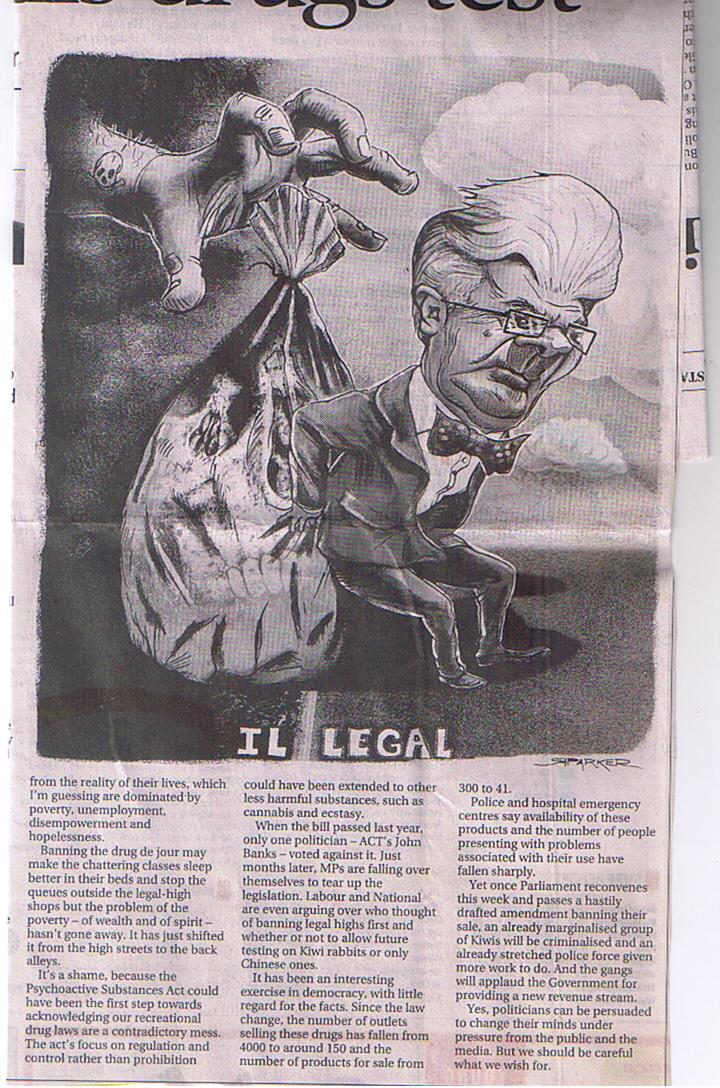 I dont know why I could not find this article on the net when there is what I thought was a full copy of this Sunday Star Times edition >>>Here<<<<... yet this opinion piece is strangely missing? I found this omission 'Odd'... yet I am no expert at these matters... what can be inferred from such omissions? Obviously not a Full E-copy. I am keen to discuss this article with readers and Reformers, and I think it is important that foreign researchers on this debate can gain reference from it as an independent commentary. I have made attempts to contact the author via Facebook.