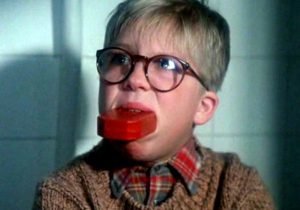 I confess… and it’s no secret…
I Swear.
It is something that I struggle with.
I dont think it’s ok.
Yet neither do I buy into what Self-righteous freaks suggest that some how… because I swear… that is evidence I’m not a true Christian.
Its called being imperfect.
And there are many people who are PC… dont swear yet have far more malevolence in their hearts… they just dress their hatred and bigotry in more socially acceptable garb … yet it can be even more vile and insidious in it’s intent… yet that is how self-righteous hypocrisy manifests itself. 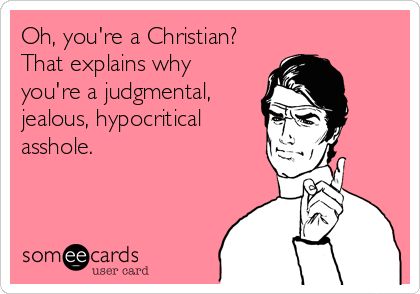 ^ Sadly…There is some truth in this

I admit my shameful short comings… I dont wear a fake cloak of righteousness.
And I do try and live a better life every day… yet it is hard to get swearing out of your system when it is ingrained in your vocabulary of self-expression… there is no ‘Magic’ way to stop… anyone who thinks the Holy Spirit magically stops people from swearing is full of ‘it’.
I try to keep it real… try to remain sincere… and not put on an act… a facade… I am me… and one of the things I loath about *Acting Christians* is their phonie-ness .
I have always struggled with my spiritual walk against the Flesh… I have to trust God’s grace is sufficient for me… the wretch. 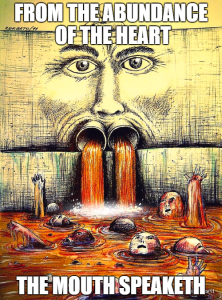 I am not a Pastor because I am unworthy… I do admire people who are both holy and sincere, and full of grace… not law… yet there is something very wrong with all the messages I hear about being ‘Holy and separate and not like the world’… To me they mostly preach a ‘Fake stereotype’ of what they think *Every Christian* should conform too… as if there is only one pattern… as if we ought to all be alike in every aspect… all like pastors… all absolutely and only committed to the gospel… or else we are being evil and ‘like the world’… yet I can see that this idea is *not what the Bible says*.
The Bible says we are all *different parts of the Body of Christ*… with different jobs to do… different gifts and talents.
Different struggles and missions.
And most of us are not called to be ministers and Pastors.
Our first duty is to take care of our families safety and necessities… and raise our children in faith.
This means we work in the real world… Buy houses… vote in elections…. are concerned about Terrorism… and we raise our children under the grace of God… not under the Law… and under grace we may still watch TV… still cheer for our favorite sports teams… buy a boat and go fishing… etc etc.. ie we enjoy our lives like ordinary people… and so its *not a sin* in many ways to look like ordinary people… because that is what we are… and so I get very annoyed with self righteous zealots who claim unless we appear as zealous as they do, that somehow we are fake Christians… ‘like the world’.
I say they are far more likely to be the fakes!
they have totally missed the boat about being a Christian.
I am a real Christian!
Not Perfect…
A Sinner saved by the grace of God… and trying to incorporate Christian virtues and values in my life… and preaching the gospel when opportunity presents it’self. 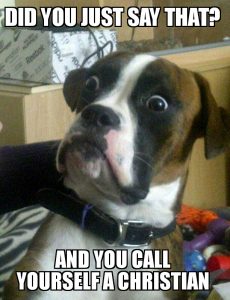 It cant be denied that swearing not only offends God, but also ruins/ severely detracts from a Christians testimony… and this brings me grief to know this.
It pains me that some lost souls will turn their ears from my testimony because I swear, and
If my testimony is worthless because I swear then virtually my whole life is worthless… yet I dont believe that.
God only has imperfect Servants with which to delegate his chores!
There are no perfectly holy Christians.
I dont believe the gospel would be better off if I hid my faith until I master my unruly tongue.
I still believe my testimony has value *despite my failings*…
I try to represent the truth that God’s grace is open to ordinary people… ordinary sinners… and that becoming a christian doest not demand a person become a faker… a card board cut out of what *the world thinks Christians are*.
Becoming a Christian does not a perfect person make… it is but the beginning of a new path *and process* of Moral Redemption as we transform from a Lost soul and the thoughts and habits thereof into a ‘born again’ new person patterned on Holiness.
Yet The Old man does not surrender easily!

The less the vile wickedness of the carnal tongue is no joke… no laughing matter…. It is something Alien to God’s Holiness, and is very much an attribute of Satan himself!

An ‘Anarchist Christian’ friend remarked “I think it’s okay to have a potty mouth, just don’t use names of God as expletives.”

I pointed out firstly that… ‘I think’… is not a good yardstick for morality… not objective… and secondly the concept of … ‘I think it’s okay to have a potty mouth’… gets its subjectivity because of Our ‘acclimatization’ to what we conciser ‘normal’… and the excuses and rationalisations we create to pseudo-justify what ‘We think…’ for convenience.

I take responsibility for my predicament with regards to swearing.
It is ingrained in me because of years of habit… of conforming to ‘the norms’ of my peers in the social strata I have lived in… in particular the ‘Bogan Westy culture’ that I embraced as a Teenager, and the ‘Engineering Guild ‘ to which I Joined and work among as an Engineer.
Swearing is endemic in both these Sub cultures.
It is the norm.
And it is acceptable among the *Hard core* who consider themselves to be *The real deal*… rather than the ‘PC Wowzers’ who will never be fully accepted into this ‘elite’.
And though at face value I can see how pompous and silly… and in fact *immoral* these ideas are, it still takes a monumental effort not to think in these terms… It is so deeply ingrained into our *Personal Identity and world view*.
Just questioning these ideas and trying to escape it is looked upon as almost a sign of betrayal!
The problem is that I have bought into this stuff to such a degree that *It feels true to me*… even though when I step back… i know its an evil delusion.

Thus I battle within myself.
I admit my own stubbornly ingrained false values that are in conflict with what I know to be Right and good.

This is the spiritual battle between the Old man… the flesh… and the New Man Born of Faith in Christ.

On the upside I am not the sort of Christian who gets offended by swearing, and even should I eventually win the victory over my own cussing … By God’s Grace I hope never to be a person who takes offence… or hold anyone in contempt for being a swearer.
I will have grace upon them, and will continue to preach Gods grace… may I never become one of those self-righteous and judgmental freaks who cause Christianity to stink because of their over-zealously turns them into contempt filled Pharisees.
I believe this is actually a positive virtue that aids me in what I believe is my God given calling and mission field… which is to share my testimony with Publicans, and Sinners… Bogans and Westies… in other words…. among my own people.
I pray my personal walk improves and my testimony becomes more valuable to God.

P.S I do need to clarify one more thing… and that is that in a very real sense God has given us a pattern and example to follow and emulate… and that Pattern for the Christian is The Apostle Paul… yet this does not mean we are to *Exactly* emulate him like perfect xerox copies… We ought to emulate his Ideals and values, and follow his doctrines yet this does not mean we will all appear like clones… We should not all become tent makers…. we are not ourselves Apostles!
We are to incorporate Paul’s teachings into our own lives and circumstances… and apply them as we follow what we believe is Gods will and intention for our lives… as individuals… seeking out Gods special purpose for our lives.

and this one from Richard Goode….

Salt is a four-letter word