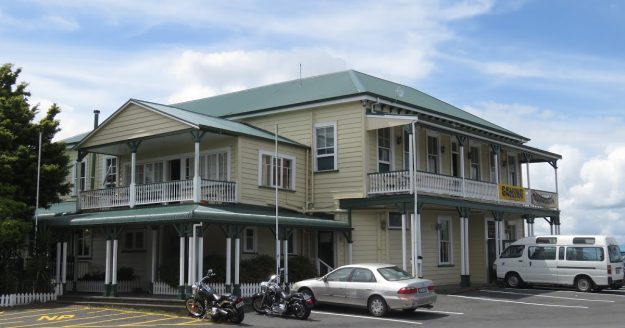 I almost didn’t make it to Willies 75th birthday celebrations yesterday, as right at the last minute the sober driver who had volunteered to drive the crew out to the Rangiriri hotel phoned me saying she was having a Water leak emergency in her house and could not make it!
Then I found out another mate was also pulling a no-show and instead was pissing about with his friggin boat.
That was on top of an earlier cancellation by team member who made some lame arse excuse about working!

I decided come hell or high water I was going. I thought about riding out there on my Bike but it proceeded to piss down!
Now I am known as a true Bogan Hard man, and Waikato Draughts most Loyal fan… even my Triumph Bonnie has Willie the Waiter on it’s side-cover (from the 70th birthday stubby boxes)… yet I admit I was not keen to end up like a drowned Rat at the pub.
Fate was clearly conspiring against me. 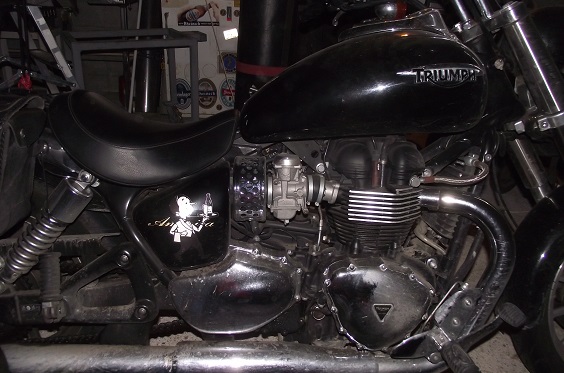 Thankfully one of the few reliable ‘Pukete Pissheads’ said he would drive us there and so after that bumpy start Me and Brent H were on our way.
It was hosing down Cows and sheep on the Huntly Expressway, and I was sure glad to be riding in a nice 4×4 rather than battling the elements on my Trumpy like a Mad man. 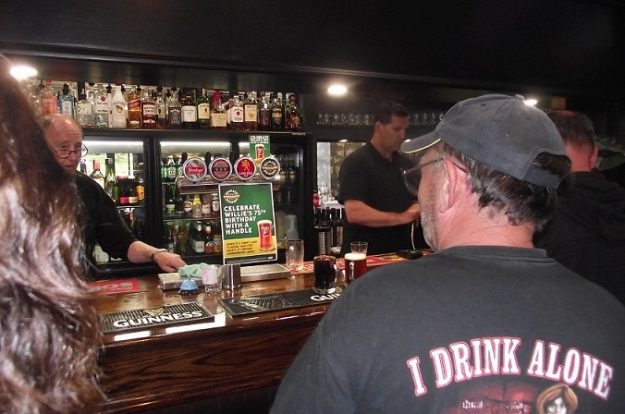 We arrived dry as toast at the Rangiriri … on time … got our first Waikato’s and wandered into the Public Bar.
There was a guy on the guitar playing tunes and what looked like a bunch of locals.
There were probably about 10 Bikes parked outside, I noticed a tribesman MC patch.
Brent was taking it easy on the beers because he was driving, which meant that I had to sink the drink to get enough stamps on the Willies handle giveaway ticket to get a 75th Birthday handle.
You need 8 stamps to get the free handle. 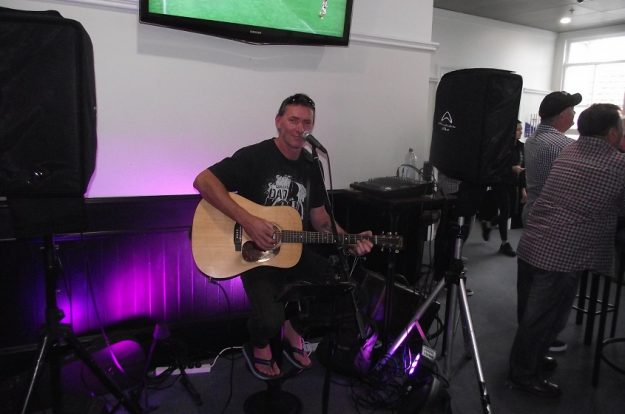 Half an hour or so into the 2 hour event Lion Breweries were doing for Willie, the Rep (forgot his name) started doing a few quiz questions, pulling names from a bucket (we all had put our names on a Willies 75 handle tickets for this purpose) and for about 30 minutes… one by one, attendees were called up and asked some NZ Trivia questions.
With a lot of help and laughter from the Audience and rep the contestant got their three answers right enough to go pick themselves a prize from the large stack of Waikato merch Lion had supplied for Willies birthday.
After a short musical interlude (and a few more handles) the quiz kicked off again, plus a few ‘challenges’… one was for two ‘punters’ to draw Willie the waiter with a black vivid marker. The results were quite impressive! There could only be one winner, who was then able to grab themselves a prize. 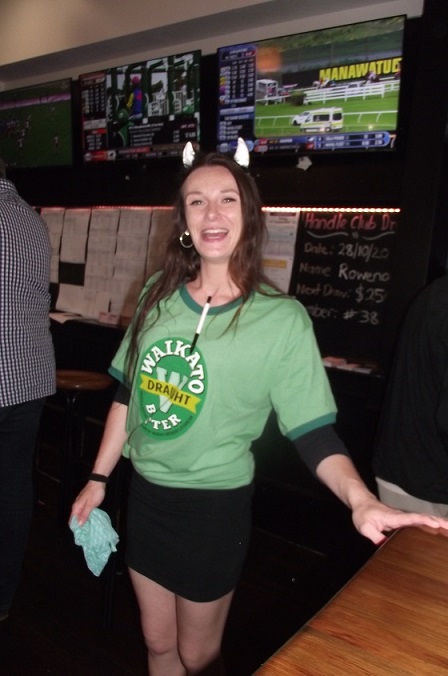 Being a bit peakish I thought I’d shout my friend a famous Rangariri Hotel burger that comes with fries… the least I could do given he had volunteered to be sober-ish driver.
He had the Chicken burger… I had their Beef Brisket burger which was excellent… gravey… gerkins…etc.
Both Brent and I eventually got our names pulled out of the bucket and answered our quiz questions… I ended up with a pair of Willie the Waiter Jandals, and Brent got himself a 75th handle!
It was all very good indeed! 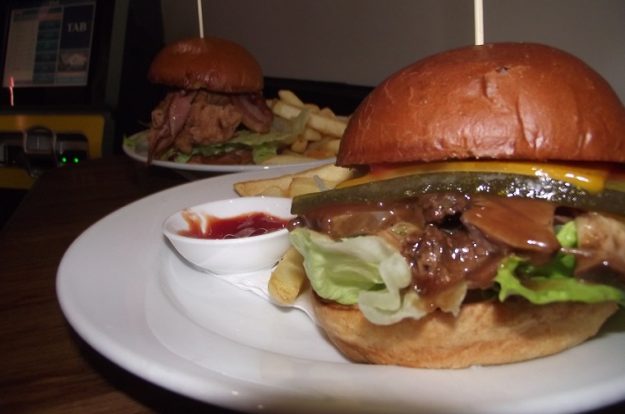 Brent had another beer which managed to fill up the 8 stamps needed for me to get my free handle too!
The grand prize that everyone was in the draw for… and wanted bad… was an awesome ‘Ice-Tek’ Waikato Draught chili bin valued at over $400.00 which was won by a very happy local.
All in all it turned out to be a great day… despite being a few Drinking pals short.

At the end of the ceremonies a shout out went up for the Rangiriri Hotel and Staff for allowing Lion to use their establishment, and that is when I made a move to grab as much Waikato 75th meborabilia as I could! 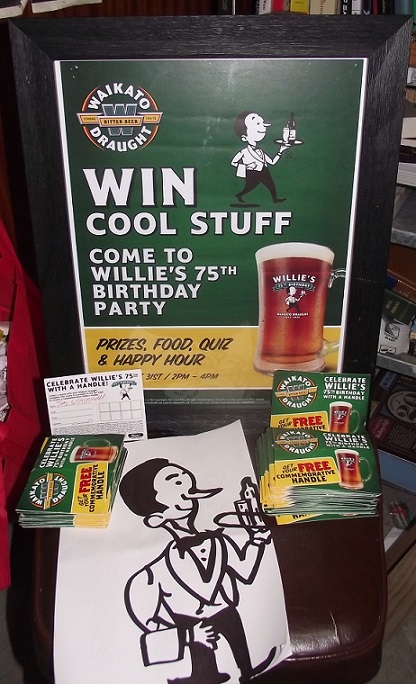 I ended up with all the 75th handle tickets (80+), and the two hand drawn Willie the Waiters from the Comp, and a good size advertising poster of the event!
Very happy with that!

I guess it was fairly obvious who was the Waikato Draught maniac as the owner of the Pub came up to me and introduced himself and we had a short chat about the importance of Waikato Draught to the cultural heritage of the Waikato region and beyond.
I thanked him for holding the event and expressed hope that they would continue to do so in the future.
He is obviously a Waikato/ Willie fan himself as he asked me about handles, and if I had any double up’s and in particular if I had a spare 54th birthday handle.
For anyone who does not know ‘the 54’ is the rarest and hardest to get Handle out of the set of 25.

They started celebrating Willies birthday on his 50th with a special handle in 1995 and they have kept up this tradition for 25 years now.
For some reason Waikato Draught must have made less handles in 1999 because now the 54 is very sought after and can go for hundreds of dollars.
Unfortunately I could not help him yet recommended he make contact with ‘The Friends of Waikato Draught’ on facebook and that they may at sometime come across a 54 he could bid on.
I hope we can help him out! 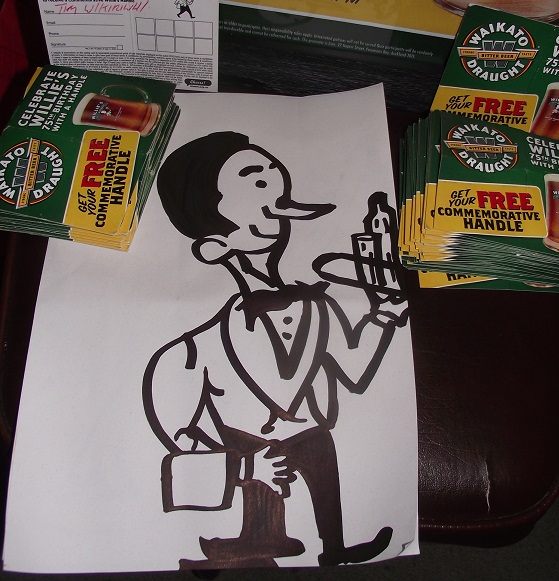 Willie you old bugger!
May you enjoy fame for many years to come!

Friends of Waikato Draught can be found here

The Rangiriri Hotel is a great pub and dedicated to carrying on the proud heritage of Waikato Draught and so I encourage readers to stop there often for an ale… and their burgers are highly recommended!
It’s a favorite stop and watering hole for bikers.
You can sit outside in the garden and enjoy a cold one.

So it would seem that Willy the Waiters official 75th celebrations have come to a close.
Maybe a few pubs will still have a few handles to give away.

I must say this celebration at the Rangiriri and another one I attended at the Te Rapa Tavern Sports bar (another great pub dedicated to Waikato Draught) have gone a long way to alleviate my earlier fears that Lion were dropping the ball on Willies 75th.
I talked about that here.
The Rep told me they had held 6 events at various locations… well done Lion.
I hope you continue to celebrate the iconic brand you have acquired and appreciate just how dedicated Waikato Draught fans are, and how passionate they are about their/your beer!
There is nothing more Waikato… or more Kiwi than Waikato Draught!
May Lion always strive to take good care of that brand… and the quality of that Beer!
The world’s best beer we say! 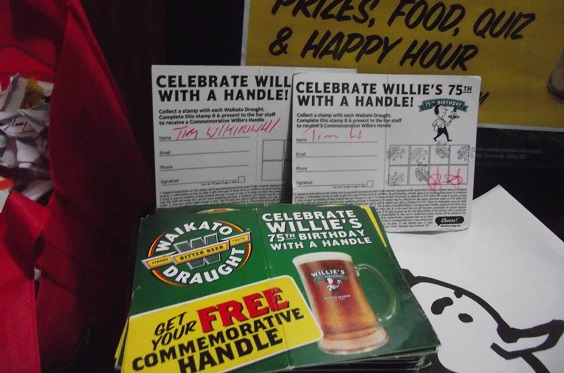 I have 80 odd Willie the Waiter 75th birthday cards I can now give away to Waikato Draught fans… anyone who would like a couple can leave a comment below. 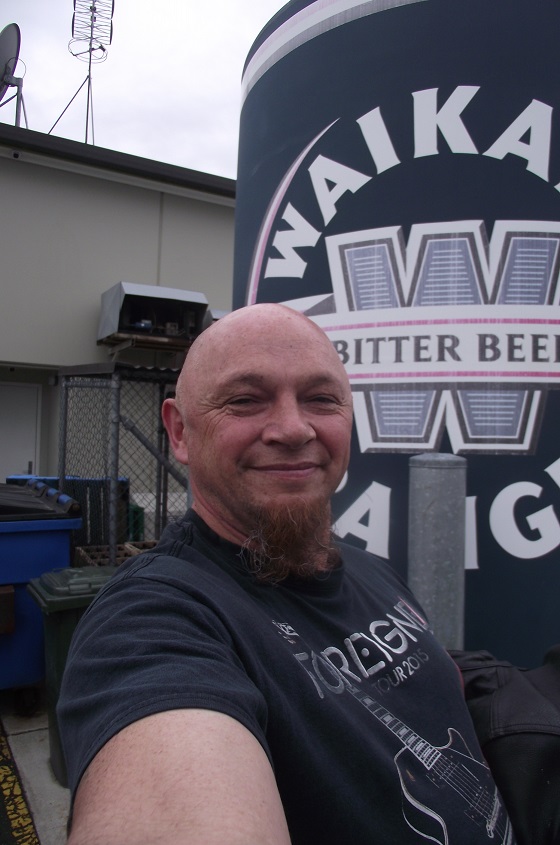 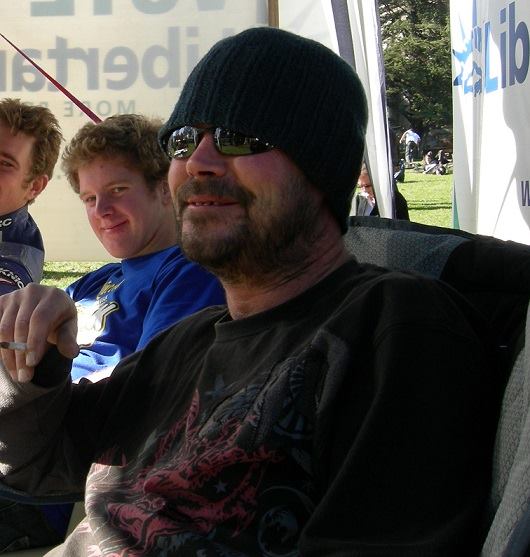