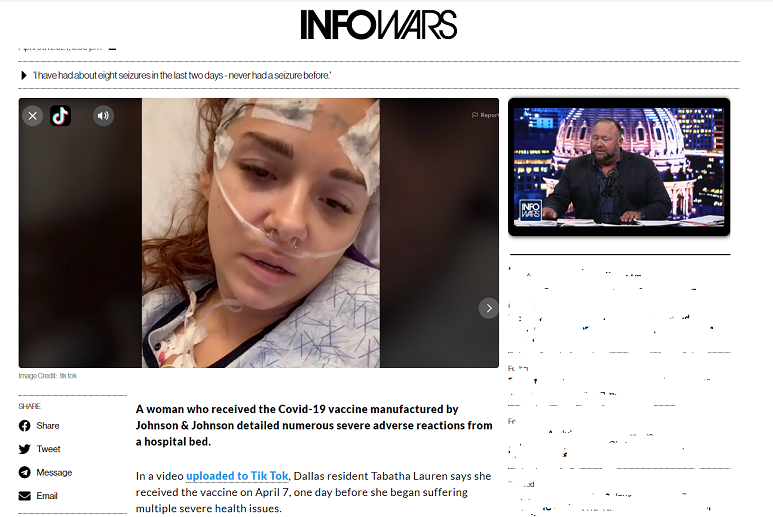 Look at this poor girl.
Appreciate why she is broadcasting this message… as a warning that there is a high risk of serious injury from taking the Covid 19 vaccines.
We are seeing more and more of these despite Social media threatening to deplatform ‘users’ who share such information that might be construed as being ‘Anti-Vaxx’.

She just had the Johnson and Johnson vaccine…. never had seizures before… yet no medical staff will admit the vaccination is the most likely cause!

It does not take a rocket scientist to do the math!

The willful non-committal ‘ignorance’ of the medical staff is simply trained collusion in a cover up.
They don’t want to admit their Snake oil is most likely the cause and that their so-called cure is worse than the disease!

What is blowing away the medical establishment is that now patients have the technology to broadcast these sorts of adverse reactions that in the past could easily be hushed up … and the scale of this Medical Scandal is an outrage!
Just as cell phones in the hands of ordinary people are catching out rouge Police engaging in abuses of power, intimidation and violence this same ability to broadcast videos to the internet is exposing that scale of adverse vaccine reactions that in earlier times would not be known by the general public.
Medical staff who witness such adverse affects are often too scared or indoctrinated to speak out about what is really going on.
We can see why Socialist Governments want to get control of the internet, and use AI Algorithms to hunt out and block streaming that exposes their programs as dangerous…. because they want to keep the populations stupid and gullible, and submissive to their tyranny.

What is also amazing is watching friends and family’s Cognitive dissonance when they are confronted with this empirical evidence!
They have an automatic shield … a fire wall… which will not allow them to properly evaluate the mounting evidence… and so they simply resort to name-calling and other derogatory devices to excuse rejecting what they don’t want to acknowledge… and they are hell bent on maintaining the lies of the Medical establishment.

Just the fact that this video is being shared by Alex jones Infowars can be enough for them to throw up their shied and not contemplate the evidence.
They label people like myself as Nutcase conspiracy theorists.

They completely fail to appreciate that these sorts of stories will never be front and center on main stream media, or given traction on their officially sectioned woke social media platforms.
They label people like myself as Nutcase conspiracy theorists.

Meanwhile poor young girls like this are having their lives destroyed.

Watch the video below… It explains how the Medical Guild maintains its ‘Orthodoxy’ in the public mind and thereby protects it’s monopoly over the healthcare of nations… Not by the quality of science it champions, but by indoctrination, persecution, Mass marketing, and coercion.
And the results are abhorrent.

In ‘Free Speech Under Attack’ I said this…

“Consider how Prime Minister Jacinda Ardern has taken the opportunity from the measles outbreak in Auckland in 2019 to drive home her desire to make vaccinations compulsory.
She blamed the anti-vaxx movement for low uptake on the government’s vaccination programme and the spread of the disease, even though medical experts said there were other factors that were responsible.
The anti-vax movement is another unpopular minority group that has been singled out for censorship because they vocally resist the concept of compulsory vaccinations. They too have been getting slandered and de-platformed on social media.
The biggest problem with regards to vaccinations in New Zealand is that, because we have a state health system, they don’t take kindly to criticism of how they function, and are always covering up their medical misadventures. As the saying goes, you can’t fool all of the people all of the time, and so many people don’t trust politicians or the health system they run. Personally I am not anti-vaxx but I am absolutely opposed to compulsory vaccinations because there are defnitely serious risks involved. And here is where the issue becomes a matter of free speech and access to the whole truth – not just the government’s side of the story. It is a parent’s right to decide if they will risk vaccinating their kids and yet, to exercise this parental responsibility, they must be told the whole truth; they must have all the facts and opinions so that they can make informed and prudent decisions. Yet the power-trippers who want compulsory vaccinations, seek to downplay the risk and silence those who are morally inclined to raise the alarm and highlight the risks. The concerns of these pesky ‘anti-Vaxxers’ that lobby against compulsory vaccinations are dismissed as being fallacious, and they are castigated as being ‘anti-science’ – the equivalent of ‘Flat Earthers’.
Parents need to know that there is a risk of serious reactions to vaccinations. They should not be lied to about this or have their parental rights taken away by the state making it compulsory.
One of my wife’s cousins had a catastrophic reaction to the Rubella shot. She was crippled, and died young.
It has been proven that these adverse reactions can be a hereditary disposition. Thus families are going to be far more aware of such propensities within their own kin than politicians who don’t give a dam about such things and have convinced themselves that they are acting for “the public good”. And most importantly via the right to free speech it is the right of those who believe that vaccinations are dangerous to make their case publicly and it is wrong for the government to censor them.”

I pray for Tabatha Lauren.

4 thoughts on “Cell phones are exposing the monumental scale of vaccine injury. The medical establishment is losing the battle to cover up their atrocities.”