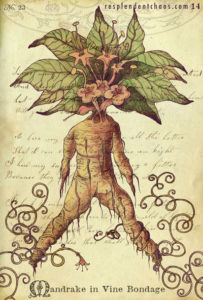 I recently watched an exposition on Freemasonry that provoked me to spend some time surfing the net looking at what interesting materials I could find on the subject.
While searching the internet this evening, researching the Masonic Secret society, and the ‘Lucis Trust’… a Satanic organisation dedicated to ‘a New World Order’ that offers ‘consultancy services’ to the United Nations.

I watched a short You tube documentary on Alice A Bailey, whom the Lucis Trust claims as their Esoteric philosophical founder… several clicks later I was watching another video called The devils 10 Commandments located in the United Nations Building!!! A MUST SEE

Quote… “The Old beliefs will be brought back again… The whole secret knowledge of nature, of the divine, of the demonic. We will wash off the Christian Veneer, and bring out a religion peculiar to our own race.”

The Nazis obsession with the Occult is well documented yet still this was not where I was expecting to be led.
Still as a Christian this quotation touches on a subject of interest to me, and anyone who has spent any time studying Hitler and the Nazis, that quote certainly embodies what ought to be well understood about the basic premises of Hitler’s fundamental beliefs. He was no Christian!

Putting aside for the moment my investigations into the Masons and the Lucis Trust, I decided to see if I could find corroboration on the net that Hitler did in fact make that statement… so I put that quote into Duck Duck Go and it listed some hits… one of which is the article by Kerry Bolton… ‘Hitler, Christianity, and the Third Reich.’
Found on ‘National Vanguard’ Website.

I am completely unfamiliar with the tenor of this site yet just from looking at the Websites Header gives me the creeps… It looks to me like some whack far right site… ‘New Consciousness, New Order, New People’ type jargon could hardly be mistaken for anything else… and yet I might be wrong about that… I simply do not have the time right now to investigate this sidetrack, yet browsing Kerry Bolton’s ‘Essay’ I found it a very interesting read. Well written, and worth making a blog about so that my friends and readers could check it out for themselves.

I have no clue who Kerry Bolton is or what his personal ideals and values are. I must write a disclaimer that I distance myself from any association with the ‘Far right’ to which he may subscribe or the website ‘National vanguard’.
It is simply a matter of ethics to correctly credit the authorship and website.
That is as far as Eternal Vigilance blog has to do with the source.

I am a Libertarian who is as opposed to far right socialist tyranny as I am opposed to far left socialist tyranny.
It is sad that We live in such times that make inserting such disclaimers a matter of self-preservation due to the threat of being ‘investigated by the police’ for simply sharing opinions and articles on the internet which they might deem to be ‘Dangerous’ or ‘hateful’… or from sources they have flagged as ‘Extremist’, etc.
Thanks to the censorship tyranny and surveillance of Jacinda Ardern’s Post-Christchurch Terror attack Police state … constantly hunting for ‘White supremacist Boogiemen’ Kiwi bloggers like myself are reaching the point where we will need to attach permanent disclaimers to any subject we write about that does not ascribe to the official Politically correct perspective… or our own views for that matter.

All this aside Bolton’s essay itself appears to me to be an objective history upon the subject stated in the title.
It is in fact one of the clearest and well reasoned articles I have read in a very long time on this subject.
I believe it to be a highly informative read that stands on it’s own merits.
He sites his sources.

As a student of Political history whose personal library contains many books on The Nazis, I find the article compelling, and truthful, and exposes the folly and ignorance of the many people who try and implicate the Nazis and Hitler himself as being ‘Christian’.
This dishonesty is committed by intellectually and spiritually twisted minds seeking to bring the Christian faith into disrepute.
Hitler was at his core a Machiavellian Liar and would mold his speeches and propaganda to suit his own immediate ends.
Any statements he made that appeared at face value to be supportive of Christianity was always a ruse by which he gained the submission of German Christians to his aims.
His real intents was always to destroy Christianity once his war ambitions were accomplished.
Anyone with half a brain can see that his deeds and modus opperandi were the very antithesis of Christianity.
Hitler was a type of the Antichrist, and his persecution of the Jews was Satanic.
He lifted himself up and committed great evils before God, whom visited him with Judgment and Justice. 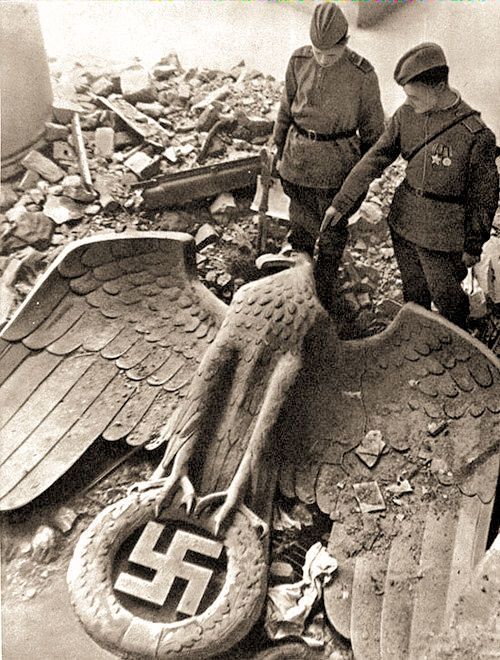 Please follow the link (above) and read the full article.
Below are a few examples of Bolton’s assertions copied and pasted here for a record in case the original web source ‘disappears’. 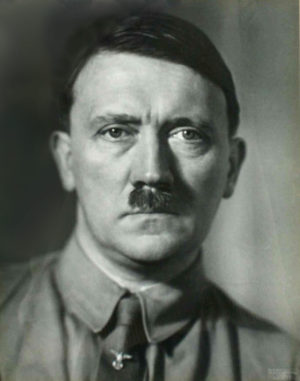 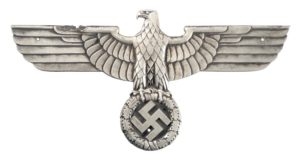 THE POX OF CHRISTIANITY

Hitler’s analysis of Christianity is Nietzschean: “The reason why the ancient world was so pure, light and serene was that it knew nothing of the two great scourges: the pox and Christianity.” “Christianity is a prototype of Bolshevism: the mobilization by the Jews of the masses of slaves with the object of undermining society. Thus one understands that the healthy elements of the Roman world were proof against the doctrine. Yet Rome (i.e. Fascist Italy) allows itself today to reproach Bolshevism with having destroyed the churches. As if Christianity itself hadn’t behaved in the same way towards the pagan temples.”

HIMMLER AND THE SS

The SS epitomizes the contradistinction between Christianity and the philosophy of the Third Reich. It was a Black Order in its own right, and Himmler envisaged the creation of an autonomous SS State which would be an example to the world of National Socialism. In 1937 Himmler instructed his chiefs to plan a counter-culture to replace Christianity, and it was declared, “the age of the final showdown with Christianity” had dawned, and one of the objectives of the SS was to provide Germans with “the proper ideological foundation” to replace it….

Martin Bormann, who became Hitler’s secretary and deputy after Hess’ abortive peace mission to England, like Himmler, Rosenberg, Heydrich, Hitler and most of the others at the top of the Reich hierarchy, also had a clear perspective on Christianity. The following is taken from Kirchliches Jahrbuch fur die evangelische Kirche in Deutschland: “National Socialist and Christian concepts are incompatible. The Christian churches build upon the ignorance of the men and strive to keep large portions of the people in ignorance because only in this way can the Christian churches maintain their power. On the other hand, National Socialism is based on scientific foundations. Christianity’s immutable principles, which were laid down almost two thousand years ago by Jews, have increasingly stiffened into life-alien dogmas. National Socialism however, if it wants to fulfill its task further, must always guide itself according to the newest data of scientific researchers.”

“When in the future our youth no longer hear anything about this Christianity, whose doctrine is far below our own, Christianity will automatically disappear.” “When we National Socialists speak of God, by God we do not understand, as do naive Christians and their clerical beneficiaries, a manlike being who is sitting around in some corner of the spheres. Rather, we must open the eyes of mankind to the fact that in addition to our unimportant earth there exist countless other bodies in the universe, many of them surrounded, like the sun, by smaller bodies, the moons. The force which moves all those bodies in the universe, in accordance with Natural Law, is what we call the Eternal, the Allfather or God. The assertion that this world- force can worry about the fate of every individual, every bacillus on earth, and that it can be influenced by so-called prayer or other astonishing things, is based either on a suitable dose of naiveté or on outright commercial effrontery.”

“In contrast, we National Socialists call upon ourselves to live as naturally as possible — that is, in keeping with the Laws of Life. The more thoroughly we know and attend to the Laws of Nature and Life, the more we adhere to them, the more do we correspond to the will of the Eternal; the deeper our insight into the will of the Eternal, the greater will be our success.” “It follows from the incompatibility of National Socialist and Christian concepts that we must oppose any strengthening of existing Christian denominations and must refuse to give them any assistance. We can make no differentiation between the various Christian confessions. Any strengthening of the Christian concepts would merely work against us.”

“To an ever-increasing degree the Folk must be wrested from Christianity and their agents, the pastors. Obviously, the Christians, from their standpoint, will and must defend themselves against this loss of power. But never again must Christianity regain an influence in the leadership of our folk. This must absolutely and finally be broken.”

I THINK SATAN’S EXISTENCE IS A LOGICAL NECESSITY … I CHALLENGE YOU TO CHANGE MY MIND. (GOOD GOD/EVIL WORLD PART 8)

LIFE AND DEATH. HOPE AND HAPPINESS. A TRIBUTE TO REV JOHN STEELE CLARK.

HELL IS FOR THE SELF RIGHTEOUS, HEAVEN IS FOR SINNERS.