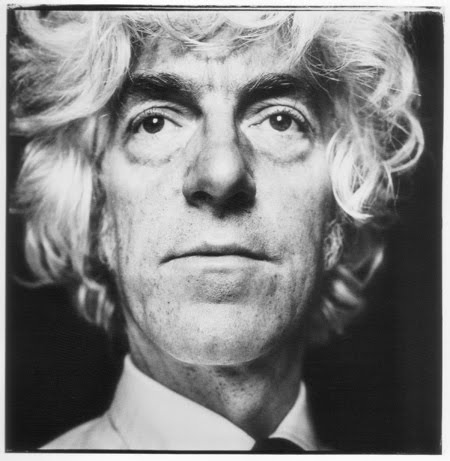 At tomorrow night’s meeting of the New Inklings, the paper for discussion is Derek Parfit’s classic Personal Identity, first published in The Philosophical Review in 1971.

Here’s a teaser from Wikipedia.

Parfit uses many examples seemingly inspired by Star Trek and other science fiction, such as the teletransporter, to explore our intuitions about our identity. He is a reductionist, believing that since there is no adequate criterion of personal identity, people do not exist apart from their components. Parfit argues that reality can be fully described impersonally; there need not be a determinate answer to the question “Will I continue to exist?” We could know all the facts about a person’s continued existence and not be able to say whether the person has survived. He concludes that we are mistaken in assuming that personal identity is what matters; what matters is rather Relation R: psychological connectedness (namely, of memory and character) and continuity (overlapping chains of strong connectedness).

On Parfit’s account, individuals are nothing more than brains and bodies, but identity cannot be reduced to either. Parfit concedes that his theories rarely conflict with rival Reductionist theories in everyday life, and that the two are only brought to blows by the introduction of extraordinary examples. However, he defends the use of such examples because they seem to arouse genuine and strong feelings in many of us. Identity is not as determinate as we often suppose it is, but instead such determinacy arises mainly from the way we talk. People exist in the same way that nations or clubs exist.

A key Parfitian question is: given the choice of surviving without psychological continuity and connectedness (Relation R) or dying but preserving R through the future existence of someone else, which would you choose?

Parfit described the loss of the conception of a separate self as liberating:

My life seemed like a glass tunnel, through which I was moving faster every year, and at the end of which there was darkness… [However] When I changed my view, the walls of my glass tunnel disappeared. I now live in the open air. There is still a difference between my life and the lives of other people. But the difference is less. Other people are closer. I am less concerned about the rest of my own life, and more concerned about the lives of others.

Needless to say, I’m with Parfit on this one. His view is both liberating and … dare I say it, Christian.
(Or, at least, conducive to a Christian way of life.) (But with some startling implications for some Christian views of salvation.) 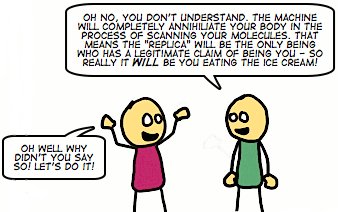 Given the choice of

(1) surviving without psychological continuity and connectedness (Relation R), or
(2) dying but preserving R through the future existence of someone else,

which would you choose? (Hint: what matters is Relation R.)

Related links: What are you? | Are you lego or logos? | Swallowed up by life | God vs. AI