I missed the deadline for an Easter Sunday blog post, partly because, unlike Jesus, I’m not an early riser, and partly because I got a bit carried away studying scripture. I might have to lay off the Bible study for a while, because I’m starting to see things that aren’t really there. Or are they? Incipient psychosis or hidden meanings in scripture?

Notwithstanding the foolishness of Dan Brown’s The Da Vinci Code, would it really come as a surprise to learn that the Bible is an integrated message system, the product of supernatural engineering?

Psychosis. That’s what you’re thinking. But bear with me. The idea is not as crazy as it might at first seem. A strong case can be made that the band who gave birth to the entire heavy metal genre, Black Sabbath, was the first Christian rock band. If Black Sabbath is a crypto-Christian band, then why not too the undisputed (by me) masters of the genre, Slayer? 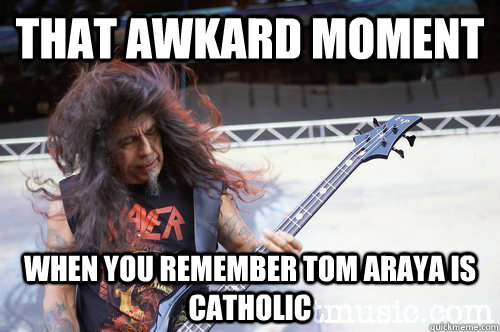 Here’s a verse from the Second Epistle of John.

many deceivers, who do not acknowledge Jesus Christ as coming in the flesh, have gone out into the world. Any such person is the deceiver and the antichrist. (NIV)

And here’s an excerpt from the lyrics to Skeleton Christ.

Speaking of sepulchres, back to the main story.

I got to pondering the symbolism of stone in the Bible, and found this verse.

Jesus is ‘the stone you builders rejected, which has become the cornerstone.’ (NIV)

You see where I’m going with this? Jesus is the stone. It’s no wonder the women couldn’t find Jesus in the tomb. He’d been rolled away! But by whom?

As evening approached, there came a rich man from Arimathea, named Joseph, who had himself become a disciple of Jesus. Going to Pilate, he asked for Jesus’ body, and Pilate ordered that it be given to him. Joseph took the body, wrapped it in a clean linen cloth, and placed it in his own new tomb that he had cut out of the rock. He rolled a big stone in front of the entrance to the tomb and went away. Mary Magdalene and the other Mary were sitting there opposite the tomb.

The next day, the one after Preparation Day, the chief priests and the Pharisees went to Pilate. “Sir,” they said, “we remember that while he was still alive that deceiver said, ‘After three days I will rise again.’ So give the order for the tomb to be made secure until the third day. Otherwise, his disciples may come and steal the body and tell the people that he has been raised from the dead. This last deception will be worse than the first.”

“Take a guard,” Pilate answered. “Go, make the tomb as secure as you know how.” So they went and made the tomb secure by putting a seal on the stone and posting the guard.

After the Sabbath, at dawn on the first day of the week, Mary Magdalene and the other Mary went to look at the tomb.

There was a violent earthquake, for an angel of the Lord came down from heaven and, going to the tomb, rolled back the stone and sat on it. His appearance was like lightning, and his clothes were white as snow. The guards were so afraid of him that they shook and became like dead men. (NIV)

Please understand that I do not deny that it was “an angel of the Lord came down from heaven” who rolled away the stone. That is the plain meaning of this passage from the Gospel of Matthew.

Who would roll Jesus out of the way, so that his own disciples couldn’t find him, finding instead a decaying soon-to-be-Skeleton Christ? One of the Devil’s angels, for sure, if not the Devil himself.

Here are a couple of clues.

And no wonder, for Satan himself masquerades as an angel of light. (NIV)

The angel’s appearance was like lightning, and his raiment white as snow … like an angel of light or, indeed, Jesus himself transfigured. And, in a final coup de disgrâce, the angel then sits on the stone, making the Devil’s most feared enemy a buttstool for his sulfurous butt.

It’s a complete inversion of Bible truth. Which is, of course, the Devil’s calling card.

Beware of false prophets and false messiahs. And the Skeleton Christ.

8 thoughts on “Who rolled away the stone?”