‘Not PC’ is New Zealand Libertarian and devout Objectivist Peter Cresswell’s blog.
Pete was Editor of Lindsay Perigo’s ‘Free Radical magazine’.
Below is an article I wrote about the Race crisis in Fiji.
I am putting it on my blog for reference purposes, yet am grateful to PC for having it on his blog too, and a link to Not PC can be found in our Blogroll sidebar.
🙂

Subsequent history has vindicated my position. 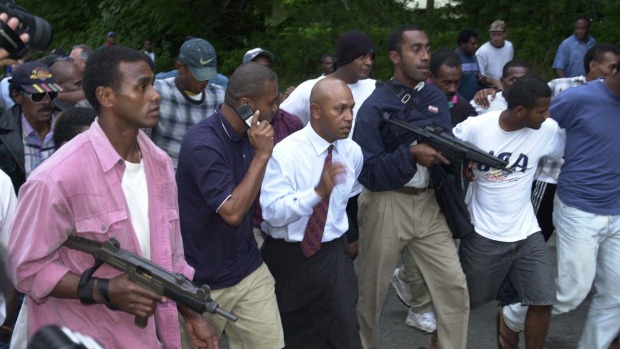 The Right of Revolution: In Praise of Commodore Frank Bainimarama.
by Tim Wikiriwhi

The latest coup in Fiji by Commodore Frank Bainimarama has highlighted for me the corruption of so-called “indigenous rights,” a recipe for division which is pedalled around the globe by the corrupt socialists of the UN. Four coups in twenty years is hardly a good look, but the instability is itself a product of racist laws that makes instability inevitable.

Bainimarama’s coup is the complete opposite of the previous three coups, each of which attempted to establish absolutely the UN’s apartheid agenda for indigenous rights. Whereas Rabuka and Speight were acting to cement the racist laws that raised indigenous Fijians over other Fijians, Bainimarama is a defender of the principle of equality.

Bainimarama said he was compelled to act against the government because corruption had flourished under Qarase, whom he himself appointed after the 2000 coup, and because of proposed laws that would grant pardons to plotters in a 2000 coup and hand lucrative land rights to indigenous Fijians at the expense of the large ethnic Indian minority.

“Qarase betrayed our trust when he went back to team up with the very people who caused the political instability of 2000,” Bainimarama said. The new electoral system he pledged to implement would ensure that all votes cast were equal, and the present race-based election system abolished. This requires indigenous Fijians to vote for Fijian candidates, ethnic Indians for Indian candidates, and others for a third group of candidates. “We want to rid the constitution of provisions that facilitate and exacerbate the politics of race”, Bainimarama confirmed at the outset.

In seeking to put a permanent end to the racist Fijian electoral system and to permanently abolish laws that grant favouritism to indigenous racists, he is in my estimation worthy of praise and support reserved for the greatest benefactors of mankind.

Apathy and submission to injustice via political delusions

A basic principle of justice is that all law should be colour-blind; that everyone, regardless of race, should be equal before the law. We here in New Zealand have however grown soft on inequality. That this is true can not only be shown by the complete lack of protest against the blatant apartheid of the Waitangi Tribunal, of the many, many race-based policies still on the books in New Zealand.

This is an indictment against ourselves and our country, and a measure of our complacency and foolishness. So many people in so many places around the globe have been deceived into thinking that “the rule of democracy” is synonymous with “the rule of law”; that democracy is a safeguard of freedom. It is nothing of the sort.

Democracy is simply a counting of heads regardless of content. True liberty exists only when the inalienable rights of all individuals, regardless of race or colour, are put beyond the vote. Belief in the ‘democracy fallacy’ is so prevalent however that when a democracy is overthrown, even a racist democracy such as Fiji’s undeniably was, many immediately say that the perpetrators are dangerous criminals!

The reality is that democracy can be as unjust as an absolute monarchy, and it is just as immoral for a parliament to grant legal favouritism upon the grounds of race as it is for a king to do so, no matter how many people might vote for it!

The rule of law means the rule of principles of justice especially of the principle of equality before the law – equality for all, regardless of race! The democratic “mandate of the majority” is a valid way of choosing who should be in government, but not a valid way of justifying how they govern, or what laws they pass, nor an automatic justification of any law proposed by a democratic Parliament! Democracy is not synonymous with freedom.

What the Clark regime are scared of is this: the simple realisation that a racist democracy not unlike the one they themselves are running has been overthrown, and overthrown in the name of overturning that entrenched and legalised racism. They can do nothing else but condemn Bainimarama! 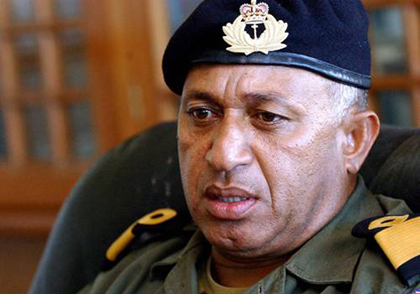 Strong man and Savior of Fiji, the enlightened. Then Commander and Chief of the Fijian Armed forces, Frank Bainimarama.

The right of revolution

Let me state the fact that the principle of equality is no light or transient cause. What motivates me to support Bainimarama is exactly the same principle as motivated the American Declaration of Independence.

We must all be aware of the maxim of Edmund Burke: “All it takes for evil to prosper is for good men to do nothing.” If you are in a position of power to stop a great injustice, but do not exercise that power, does your inaction not amount to complicity? Any man of virtue in Bainimarama’s position would be obliged to make the same choice: That is either do nothing and allow the evil of apartheid injustice to go unchecked, or to act and put an end to it!

According to Lockeian principles, it is not unjust to overthrow a tyrant. Any good man has the right to stop the enemies of mankind by the law of nature, just as they have the right to kill any savage beast. We have the natural right to defend our lives and property. It is not a crime but a righteous necessity to overthrow a corrupt government.

The limits of political power and the supremacy of justice

While many people understand that the principle of equality before the law means you cannot have one law for blacks or browns and another for whites, few people appreciate the fullness of its limiting power over government whatsoever its form. This same principle guarantees absolute equal freedom for all: It means a president, a king, or an indigenous native has no more rights than the lowliest citizen or the most recent immigrant.

The tyranny of the mob under demagogues

How many people really want true equality? Not many! Most would rather have some say over their neighbour’s rights and liberties than enjoy their own – they would rather have an absolute, unlimited democracy – one in which nothing has been put beyond the vote – if it allows them to somehow bully their neighbour, or to gain preference for their own. There are plenty of demagogues willing to crush minorities and to ride the waves of bigotry into power, and plenty of people around the world ready to applaud the bigots.

The proper constitutional context of the conventions of democracy

The power of voting is more critical when the government has tyrannical powers.

In such a system, what the US Founding Fathers described as a constitutional republic, no matter what religion or culture is in the majority or who is voted into office, the government cannot pass discriminatory laws nor usurp greater powers at the expense of the rights and liberties of the population.

The fact that nations like Fiji and New Zealand don’t have such constitutional restraints means that the right to vote is itself looked upon as the primary safeguard against corruption, and the notion of taking away an elected government by force sends dread trough the Mobocracy — yet that liberation will be met with jubilation by the liberated minorities who have borne the brunt of democratic injustice.

The limits of representative government and the power of consent

The principle of equality is the only condition of justice whereby everyone can be justly expected to grant consent, so this principle becomes an absolute justification for any form of government that is constitutionally founded upon it. Those who refuse to consent to equality and instead desire an unjust form of rule, whether they represent either a majority or minority, can rightfully be ignored and even suppressed (meaning: they halted from unjust revolution):

The justice of all these things hinges on the principle of equality. Equality before the law is the standard by which to judge the validity of all law and government.

This ultimate truth is founded upon our God-given equal rights, rights that exist as inalienable absolutes irrespective of laws and governments. Fiji is technically in a state of civil war, and has been since it instituted racist government long ago, at which point it went to war against those citizens whose rights it overthrew. In overturning a racist government and in suppressing racist mob uprisings, I submit that Bainimarama is acting under this principle of justice. He must take care how he goes about this difficult task.

The current confrontation with the Great Council of Chiefs was inevitable, since it was this corrupt political body that was behind the Rabuka and Speight coups, and behind the apartheid system of favouritism for indigenous Fijians. He must divest these tribal chiefs of their corrupt powers that perverted the democracy of Fiji into an apartheid system. The best thing the chiefs can do is support a new constitution in which all Fijians, regardless of race, are recognised as being equal before the law.

The responsibility for government rests with the people

“Power corrupts and absolute power tends to corrupt absolutely.” This is the great fear of any nation, and no doubt is a reason many fear the power of Bainimarama. I wonder why these same fearful souls are not leading a revolution against Helen Clark and Her Own Absolute Democracy!

How much evil will these frightened souls suffer before they rise up against her? Even in Western civilisations, millions are dying each year as a direct result of socialism, yet no one acts against it because democracy has turned them into spineless slaves. Ultimately absolute tyrants everywhere prosper because the population is too scared to overthrow them. They prefer the safety of slavery to the risk of dying for freedom. Mugabe will continue to tyrannise Zimbabweans until the people say enough is enough. Putin will continue to suppress Russian protest until the people say enough is enough. Their tyranny will continue until those sufficiently brave and staunch enough for freedom run into the seat of power and oust these tyrants!

The limits of tyrants are set by the resistance of their citizens. All would-be tyrants must fear the wrath of freedom-loving people! Dictatorships can only stand where the people choose submission over revolution.
The price of liberty is indeed eternal vigilance.

Who ought to engage in such revolution? Every enlightened individual who refuses to submit to tyranny. New Zealanders need to sort out their own apartheid systems of state before they tell Commodore Bainimarama to surrender to the racists of Fiji!

Tim Wikiriwhi is a Hamilton engineer, and a self-described Independent Libertarian. 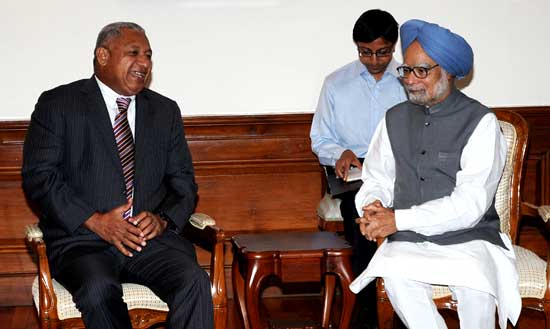 4 thoughts on “Not PC: FREE RADICAL #75 – The Right of Revolution: In Praise of Commodore Frank Bainimarama. by Tim Wikiriwhi”