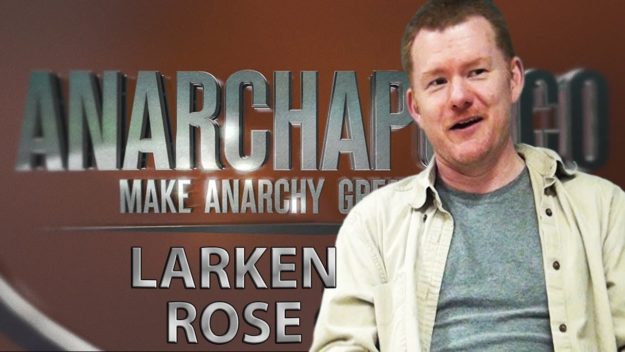 The following post is extracted from a Social media discussion I am having with an anarchist friend, about anarchy.
I am blogging the essentials so that I can refer to it in the future, and expand upon it at leisure, and also because I have written extensively on this subject for years on Facebook only to have my account indefinitely suspended. and all my arguments censored from public access.
Thus I am going to be more diligent in saving my arguments here at Eternal Vigilance Blog and elsewhere.

In the course of our discussion, I quoted the portion of the American declaration of Independence which speaks of the principle of the consent of the governed.

” the very idea [of the consent of the governed] is ridiculous, because free people cannot consent to be forcibly dominated, and government, by definition, is forcible domination.”

Now for the record I dam not fan of Larkin Rose.

I returned fire… “As for Larkin Rose his arguments are weak… one dimensional… and easily refuted.

Lets briefly talk about the consent of the governed.
It is one of the most important tenets of Libertarianism because it embodies a bundle of essential presuppositions.

It is in truth the very foundation stone of my own politics, as it entails all the premises about Men being endowed with inalienable rights, and that they are free, Equal, and competent, and have the right to form compacts with one another and to make laws congruent only with the defense of their own rights, from aggressions either from among themselves, or external threats who are not part of the compact.

The foundational Social compact is in fact A peace treaty that enunciates the basis for peaceful coexistence and cooperation.
Anarchists deny the right of people to make such treaties, and mock the logic thus demonstrating their own foolishness and making themselves despotic by forbidding others from forming their own voluntary association and compact.

We do not have space here for a thorough exposition.
That would take an entire volume, yet Rose (and many anarchist like him) table the lamest of contentions and then strut about like they won the world series in Political Science.
In reality they are space cadets. 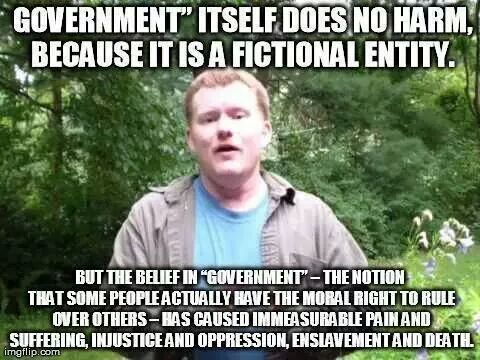 ^ You cant have a rational discussion with a person who thinks governments are figments of the collective imagination.

Look (below)at the Lame statement that has been tabled from Rose in regard to the consent of the governed ….

‘Larken Rose says that the very idea is ridiculous, because free people cannot consent to be forcibly dominated, and government, by definition, is forcible domination. ‘

This is false.
The Libertarian form of government is self defense only.
Its just powers being an extension of the peoples own legitimate right… nothing more.

There is nothing in the formation of a Libertarian government that demands all people living within that society must ‘buy into’ the government so formed… they can ‘opt out’… no problem… as long as they abide by the Laws… which if written justly … demand no greater duty than to peacefully respect the legitimate rights of others. Ie Good law simply codifies Natural Law principles

‘… to secure these Rights, Governments are instituted among Men, deriving their just Powers from the Consent of the Governed, that whenever any Form of Government becomes destructive of these Ends, it is the Right of the People to alter or to abolish it, and to institute new Government, laying its Foundation on such Principles, and organizing its Powers in such Form, as to them shall seem most likely to effect their Safety and Happiness. ‘

Hence there exists a very limited justification for small government with codified Laws, just enforcement, and impartial disputes resolution whereby people agree to take disputes to court rather than gun down each other based only upon their own interpretation of the facts (such as was the case in Savage pre-European New Zealand… which was an anarchist system.

The system the British brought to New Zealand was far from perfect, none the less it was 1000 times better than the Anarchy that existed prior whereby the Strong preyed upon the weak, and life and property were in constant peril.

Civil society needs well defined order and an impartial ‘referee’.
It is not an all or nothing scenario… which simpletons like Rose try and make it.

I would suggest that even you assent/ consent to that degree…”

More from Tim…. WILLFUL IGNORANCE AND THE LIMITS OF HUMAN REASON (WITHOUT DIVINE REVELATION.)

NOT PC: FREE RADICAL #75 – THE RIGHT OF REVOLUTION: IN PRAISE OF COMMODORE FRANK BAINIMARAMA. BY TIM WIKIRIWHI

LIBERTARIAN OPPOSITION TO THE GLOBALIST AGENDA OF MASS IMMIGRATION.