I have not shared the Manifesto in its complete form.
I do not hold any copies of it either electronically on my PC or in paper form.
I have only commented and quoted it in reference to current affairs… none of which has been to incite hatred, or racism, but merely to critsise Government actions that have taken place directly related to the Terrorist attack in Christchurch.
I sourced my references to the manifesto by the internet *before the chief censor deemed it to be a prohibited publication*

This blog post was originally an *Important note* I had attached to my other blogpost here … yet because this thing incrementally grew as events have rapidly transpired it became absurd to leave it as a note that was almost as long and significant as my original post.
So I decided to cut it from the top of that post and make it a post in its own right and I will place a link on the top of my other post to direct readers to this explanation.

What is ironic is that I have posted parts of the manifesto onto facebook, yet because I have been banned for 7 days… I cant access my posts to delete them!
🙂 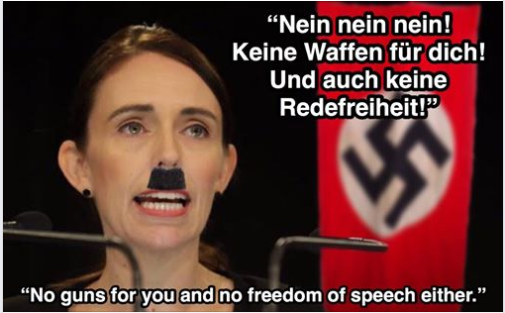 23-3-19.
I have just been made aware that the New Zealand Chief Censor has Banned the Manifesto ‘The Great Replacement’.
The question has been asked does this also include comments and the like on facebook?
Some people think the law can be construed to include all such things… yet this Blog was written before this notification was made public, and because the law states “132 Exhibiting parts of a publication
A person may be convicted of exhibiting an objectionable publication if what is exhibited is in all the circumstances objectionable, notwithstanding that it is a part only of a publication that is not objectionable or is a restricted publication.”… I believe that the context in which I have used portions of the Manifesto that this falls outside these ‘Objectionable’ conditions as my quotations are legitimate Public discourse on serious political issues that are the legitimate domain for free speech and open political discussion.
And so until I receive any official threats of prosecution I will not assume I am breaking any laws by not deleting it from my post… as to do so will not only detract from my protest, but also be another instances of the very topic of this blogpost… the political suppression of Free speech and dialogue.
I have just been made aware of this via this article.
Now if I was using quotations from the manifesto to incite Racism or violence… I would fear that I was acting within the context the Chief Censor means by the use of the term ‘objectionable’ and would therefore be in breach of his Ban … yet I am only quoting it in context of providing the necessary facts for my criticism of these very sorts of censorship that work for party political ends against the rights and liberties of the people.
Will they also ban all global media from New Zealand internet that quote the manifesto?
How in reality will this work?
I encourage New Zealanders not to delete any comments, blogs or posts that are written in the spirit of Free and open dialogue without malicious intent.
As It becomes more apparent what this ‘Ban’ entails, I may apply for an exemption should it be necessary to prevent my Blogposts from being suppressed, yet I hope it will not require that!
Oh how New Zealand has fallen! and become a land of Slaves without a voice!
We cant let something as vital as Free speech be outlawed by shameful politicians who seek to dictate the only legal narrative!
PLEASE SHARE MY BLOG!

Update: 24-3-19
The NZ Herald appears to be still quoting from his manifesto… after the Chief censors ban.
“The accused gunman’s manifesto, and his Facebook feed, refer to previous mass killers, such as the Norwegian far-right terrorist Anders Breivik, and from historical fascists such as Oswald Mosley. Having barely finished school he shunned university to work as a personal trainer. He sourced material online. “You will not find the truth anywhere else,” he wrote.
From here
Note also this article can be shared via facebook, twitter, etc. 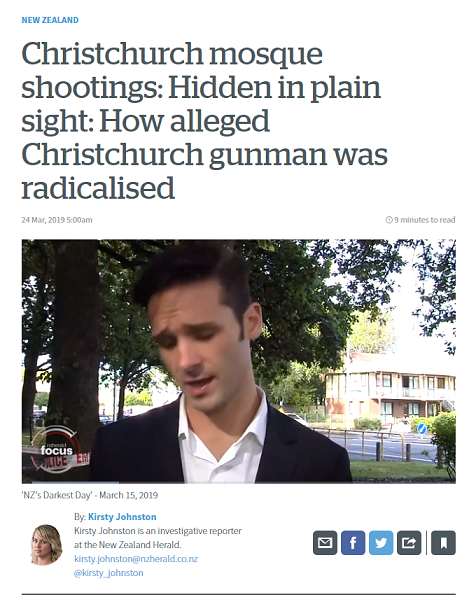 What is also disturbing about this article is that NZ security expert condemns ‘The self educated’ as ‘dangerous to society’… ie free thinkers whose minds have not been conditioned by the system… sort of the same rationale used by the Athenian state to execute Socrates.

” Devon Polaschek, joint director of the NZ Institute of Security and Crime Science, told media after analysing the manifesto: “The problem is that he is self-educated, and he is self-selecting the information that he is consuming. Reinforcing what he already thinks in a circular process.”

I will be adding to this post as relevant material comes to my attention and as events unfold. 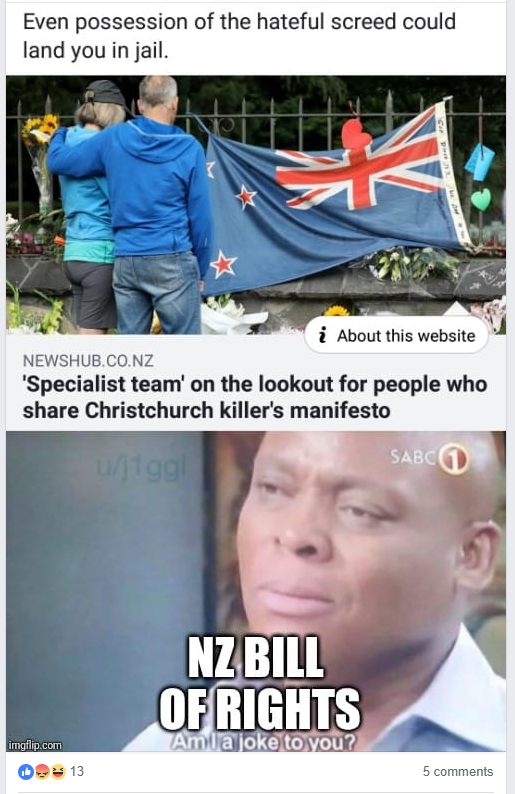 Update: It appears my intuitions about not being too hasty to delete the Manifesto quotations from my Blog posts like other sites have done… eg Whale oil and Rightminds… was correct.

Here is a quote from the NZ Chief Censor David Shanks… “Most people reading the publication will not be harmed by it.

“Most New Zealanders who have read this will simply find it repellent. But most New Zealanders are not the target audience. It is aimed at a small group who may be receptive to its hateful, racist and violent ideology, and who may be inspired to follow the example set by its apparent author,” said Mr Shanks.

It is an offence to possess or distribute an objectionable publication. People who have downloaded this document, or printed it, should destroy any copies, Mr Shanks said.

Those engaged in further reporting on the Christchurch attack may be tempted to consider the use of quotes from the publication that have already been used in other media reports.

“That use of excerpts in media reports may not in itself amount to a breach of the FVPCA, but ethical considerations will certainly apply,” said Mr Shanks.”
Dated Sat March 23.

Update 25-3-19
And here is a Q+A section (picture below) provided by the Chief Censor Press release which specifically states the situation my Blogs and facebook posts fall into… and they all are outside the criteria deemed to have been prohibited…. so I am not in breach of the Censors ruling… 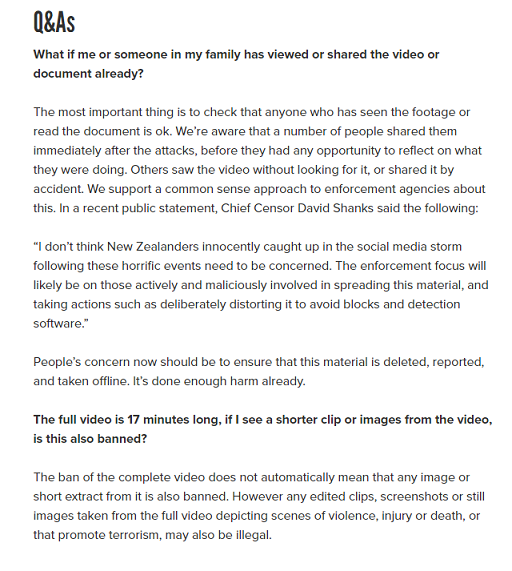 15 thoughts on “A Blogpost to explain why I have not Redacted excerpts from the Terrorist Manifesto ‘The Great Replacement’ from my other blog posts written before the Chief Censor Banned it.”