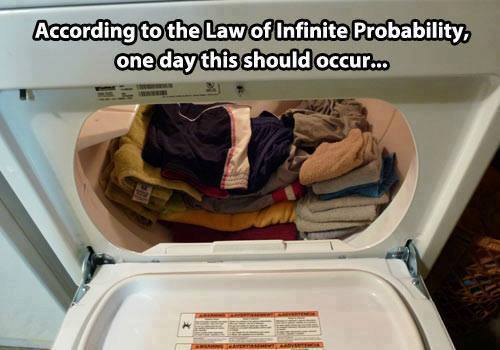 Still believe your own existence is the result of a series of fortuitous accidents????
I have one word to describe your position….. *Foolishness*.

Update:
No sooner did I post this Blog to an anti-Christian Forum I was met with comments…. “Stop Spamming! you’re just using this page for self promotion”…. ‘This post demonstrates a complete lack of understanding of Evolution….

My Reply to Atheists:
“Ha! That’s not an argument. just more hot air.
Definitively Ad Hominem …. Instead of addressing the argument you say I am engaged in ‘Self promotion’… Nor is there any need to expand on what I have presented.
It is a simple demonstration of reality.
What makes you cringe is that you know that you are now supposed to argue that what that you believe that what the photo shows…. is possible.
That no matter how this goes against common sense that Math says it is possible….. though improbable….. And yet we all know that this will never happen…. Blind forces of Nature don’t fold washing…. don’t Generate life…. dont turn Germs into people…. You are utterly undone.

3 thoughts on “The Zombie God Of Atheist Evolution. Re: Math Magic and Ultimate Mythical Power…..Infinite Probability.”