Buy a cheap jar of English marmalade (chunky style is best), about a 300ml bottle of Soy sauce and a small jar of Chili flakes.
Get a small pot. put it on the stove at a low heat.
Pour in a good amount of Soy sauce and add the whole jar of Marmalade to that and stir together to break down the Marmalade into the soy Sauce.
You can add a small amount of Oyster sauce too if you want but you don’t have to… it makes it a bit saltier.
Don’t boil it but just bring it to a low simmer… stirring it… then add the chili flakes to your own liking… I like to put in heaps as they are usually not that hot.
Let that simmer of about 5 minutes then take off the heat and let it cool right down.
Prepare your Chicken… I like wings… get a big stack of wings and put them in a big plastic container… pour the marinade over the top and put the lid on… and stick in the fridge overnite… however long you like… a few hours will do. Keep flipping the chicken about in the marinade every few hours to give it all a good soak.
Then… depending how you are going to cook them… say roasted in an oven tray use tongs to place the chicken wings into the tray leaving the marinade in the container… place the chicken in an oven at about 170deg c. Then pour the marinade back in a small pot and simmer again (this is to kill and chicken bacteria in there). Turn your wings a few times… dont over cook them… they don’t take long to cook. Pour off any excess juice that occurs in the roasting tray as you dont want to ‘boil’ them. Then when you see they are getting close to Ready take a spoon and drizzle the wings with more of your hot marinade from the pot you have just simmered to coat them all in a sticky marinade… cook them 5-7 minutes more to ‘set’ the marinade to the wings yet take care not to burn the marinade… and then Serve! BOOM!
You could do a similar method on the BBq too.
Works with Pork Too!
NOM NOM NOM! 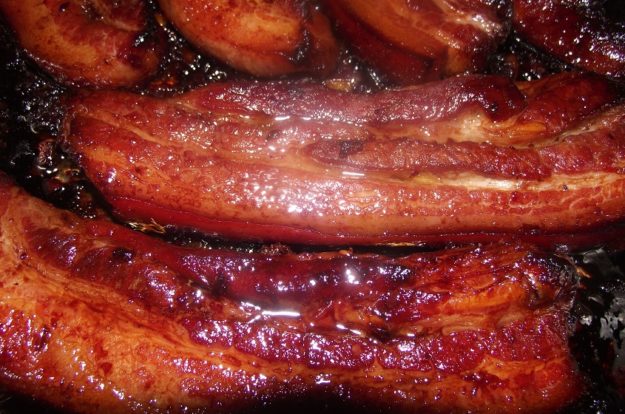