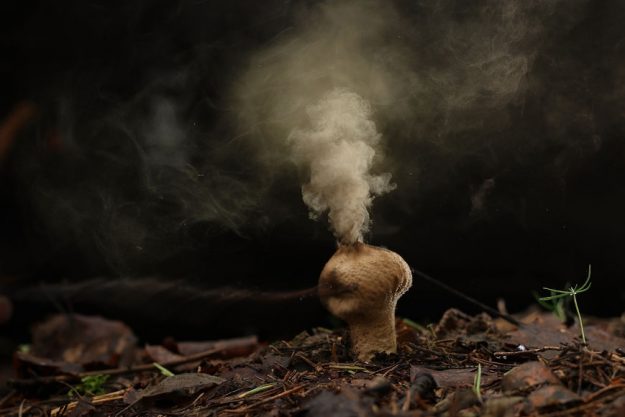 If there is ever a real alternative to Facebook where free-speech and equal rights for all prevails… I’m dumping facebook and heading there!
This is just a quick protest blog to highlight a clear case of Prejudice by Facebook whereby I was blocked from Posting, replying/communication for three days all because some Transgender did not like a joke I made on a Mushroom ID page!

For the record my Joke was thus…. On this Mushroom ID Page someone posted a pic of a Puffball and said that when they took the picture it ‘Poofed’ in their face.
They said “I hope the spores are not toxic and asked for an ID.

That is when I joked…. “It’s the deadly ‘Poof Face Fungus’ and that it turns it’s victims transgender!” 🙂

That was it.
The joke was silly… like jokes are yet it is clear that this person went out of their way to complain to facebook to get me ‘punished’… and that says a lot about how these Social Justice Warriors operate.
And FaKebook enables these types… so obviously Facebook has a clear prejudice…. Lefty Liberal AF! no surprise there!
Now my joke contained no profanities, and was getting laughs, yet even when I was about to hit ‘post’ I wondered how long it would be before some Purple Haired ‘Hero’ would complain… yet I hit send anyway… because it was after all just a joke… and it fitted the post… and to my way of thinking *Equal Rights and Liberties* means that we ought to be allowed to tell jokes about Transgenders as much as we tell them about any other demographic… such as jokes about Men, Woman, Bikers, Engineers, etc etc.
*That is what equality is about*
Yet what This Nasty little Queer expects… and what facebook clearly has an agenda for is not equality… But Prejudice in favour of Transgenders… against the rest of us!
Esp against anyone who disagree with the Transgender movement.

What sort of tyrannical world are these types trying to create by outlawing Jokes, humor, satire, ????
Of Course we know its open season on White males!
Many Famous comedians are aware of how dangerous and corrosive this Politically Correct attitude is against a free society. 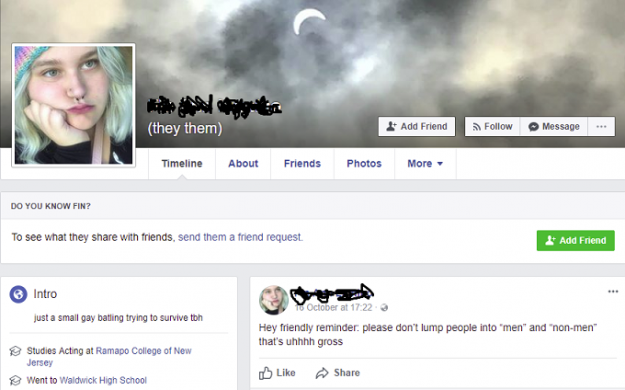 ^ It. I cant use its ‘preferred pronoun’ as who knows what ‘it’ is? You certainly cannot ‘assume their Gender’… so what do you do????

For the record while I do subscribe to the perfectly legitimate school of thought backed up by plenty of psychologists that Transgender-ism is both a Moral and mental health issue, as a Libertarian and christian, I do not hate them or wish them ill… though of course every time they get someone banned/ thrown off Facebook or anywhere else they do their demographic no favours but ferment animosity towards themselves.

I could not respond to my friends posts on important issues.
I could not respond to comments on my own posts.
I could not wish my friends ‘Happy birthday’.
I could not send prayers and positive vibs to sick children!
All because some little puffball could not take a joke!
These types are not satisfied with simply scrolling past… or even starting a debate… or even blocking you from their sight… no… they are hellbent on using any means at their disposal to *F@&# you up!
They want freedom for themselves and their Bigotry but hate Freedom for everyone else who disagrees with them.

And what is scary is that though I understand perfectly that as a private company Facebook has the right to set its own values and rules… that it clearly does not act fairly, or value Free-speech within reasonable Moderation!
It’s scary because Facebook dominates in the Global social media business and so has the ability to seriously handicap any persons internet life should Facebook decide to shut them down. 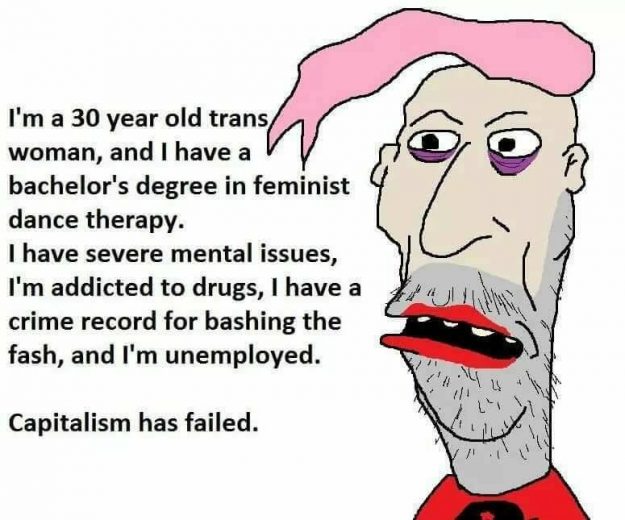 I investigated their ‘blocking system’ and it stated *There is no way to undo their Block!*… so there is no appeal against injustice!
They threaten you that if you get blocked several times your account may get closed down!

Again I dont have a problem with blatantly abusive and psychotic people being thrown out… yet I do see that The treat hangs over any Libertarian or christian, or anyone who may seek to tell jokes… or create satire about the Political agenda’s and Pet demographics of the Lefty Liberals running facebook.

I wrote a complaint about how I believe I was unjustly targeted by a malevolent political operator and that facebook functioned with prejudice… yet i wont hold my breath about facebook suddenly gaining a conscience and correcting their bias.

If there was some alternative of quality where better judgement by moderators was out there… I would Leave Facebook and go there, and I am sure there are millions of people who would do the same.
Surely there is some Geeks out there who want to get rich and can come up with decent competition to facebook????
Facebooks own behavior is generating an opportunity for competition via it’s unfairness and dissatisfaction.
Facebook is actually enabling Nasty Pettiness to prevail… instead of saying *Harden up Cupcakes*!

And a word of advise… If some purple hair SJW jumps on one of your posts to cry ‘oppression’ immediately go to their profile and hit *Block*.
That way if you are fast enough you have cut them out of your life *before* the dob you into the Gestapo.
If only I had done this myself, I would probably have saved myself from being thrown in FB Jail.

P.S If I disappear off Facebook it is because they have assassinated me.

My Comment:
As a Man this does not impress me at all!
Facebook is out of control!
People should be allowed to express their opinions or else facebook becomes some sort of Prison.
This is not moderation… its treating adults like children.
This Is Politically Correct Tyranny.
I dont want to be shielded from hearing what people really think… and anyone who agrees with this cannot complain if they get ‘punished’ for speaking their own mind.
I myself got pinged for a lamo joke I made… If this carries on Facebook will be *only what facebook likes*… it wont be your social network anymore. 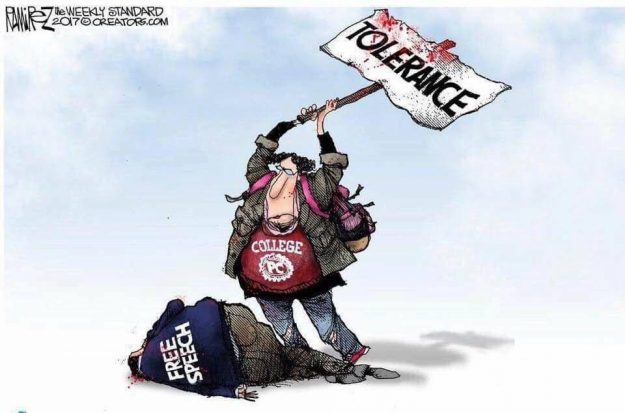 David Bowie… stepping through the door… Fags, Fanatics,Freedom and Fate.

Update: 12-11-17… Here is another example that happened on a group I belong to…. After the Admins immediately deleted my post too… I quit the group… Losers.

Now this is becoming an all too common reaction by people to Facebook posts that they disprove of and it is turning facebook into a petty minded hell!

Even though I think the post was not accurate, and probably written by a bigoted hater designed to cause pain, there is no reason to assume the person who posted it here was intentionally part of the smear campaign and it is far more likely they posted it here either because they believed it was interesting (Dark) news or to get other peoples opinion about it.
It was almost immediately erased, even though it had generated an interesting discussion about whether or not people should share such rumors …. and so even though the post itself was dodgy… It added value by the discussion, and in my opinion the post should have been allowed to stand even just for the sake of the Rebuttals that were being added in the comments… and for the value of the discussion.

Yet now all that value has disappeared, and another facebook user has imposed their (Popular) view by force upon another unpopular view/question.

Having witnessed this, I immediately went to the person who called for the admin to jump on this post and Blocked them from reading my stuff, as i have been targeted by such people in the past for expressing view they did not like and I was banned for 3 days… which was a big pain in the arse… and facebook says that if you get too many complaints against you… they will close your page!
Talk about a malicious way to shut down people you disagree with!
So I do not want to run the risk that this same person will try and get my posts deleted, or even try and get me kicked off facebook… so I blocked them… for my own safety…. nor do I wish to associate with such intolerant people.

So at the end of the day This post is a call for people not to be so quick to call in the hounds on others even though you may disagree with what they have posted… If you Facebook to be a cool place where controversial things can be discussed.

If you dont like a Post, or a Joke, etc then you are free to make a critisism, or to simply scroll past… yet for goodness sake refrain from calling for peoples posts to get deleted, or for then to be throw out of a group… or to be ‘Officially’ jailed by facebook.
Think about the sort of person you are… a freedom lover… or a Bigot who only thinks their own opinions ought to be allowed to be discussed?
If freedom Prevails so too is the truth most likely to prevail.
If Censorship prevails and only The Popular Politically Correct views are allowed to stand… that is how Great popular delusions are maintained… progress is halted… and you have created a tyranny.